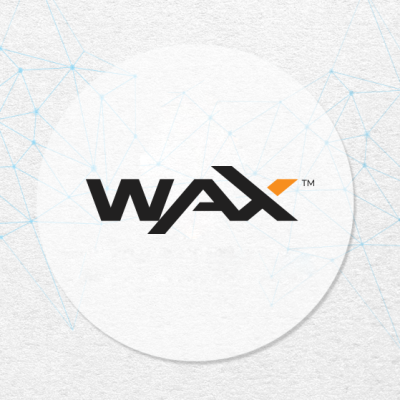 WAX (WAX) is a cryptocurrency made by the founders of OPSkins, the world’s leading marketplace for online video game assets. WAX was created in 2017 as a decentralized platform that enables anyone to create, buy, sell, and trade physical and virtual items to anyone, anywhere in the world.

The WAX coin is a utility token that harnesses the power of blockchain technology to allow virtual goods to be tokenized and exchanged for cryptocurrency. The name WAX is an acronym for Worldwide Asset eXchange and participants of the WAX platform gain access to a global community of online gamers, creators, collectors, and traders who buy and sell in-game items.

The WAX platform enables anyone to build an online store/marketplace using the project’s B2B tools. Using WAX, anyone can tokenize anything in the virtual or physical world and sell or trade the tokenized item through WAX’s blockchain-based platform.

Unlike most cryptocurrency projects, the team behind WAX chose to launch the project on an EOS variant rather than another blockchain. Then, after about a year and a half of development, WAX launched their mainnet on June 30, 2019 and WAX tokens could be swapped to the WAX blockchain mainnet up until August 30, 2019. On the new WAX blockchain, WAX tokens are generated through a Delegated Proof of Stake (DPoS) algorithm with 21 block producers called “Guilds”. Additionally, users can stake their WAX tokens allowing them to vote on the WAX blockchain and earn rewards for doing so.

In this tag you can discover WAX (WAX) news, price prediction, opinion and analysis created by users.

This is a new project that is a just two weeks away from launching as they say its a P2E NFT-game that uses "NFT stealing" mechanics! So I reached out to see what the fuzz is all about and I got the low down on the game it even has a few secrets in h...

Meet the artist behind Rubi NFT

I meet this artist through playing Splinterlands when I was looking for clan and little did I know he was an artist but saying that he has his fingers in a lot of pies but with his up coming PFP dropping very soon it was the perfect time to get him i...

I Whaled Into an NFT Project, Oh Crap

So I decided to try my first whaling into an NFT project. The current project was put together by the same team that has run the successful Trains of the Century project, which has been a nice and steady grinding income source for me for a few month...

Meet the artist behind Antylers

The one thing I love is that there is so many different types of NFTs available to buy on the WAX blockchain and this is a cool little project that has been going for a while so sit back have a read and find out all about Antylersworld. Hey man How...

What Makes a Sustainable NFT Project?

First off, I'll be the first to admit I'm no NFT expert. I haven't successfully launched my own NFT project (although I'm working on it and going through the mechanics from the ground level up). And I haven't sustained one as a project owner or manag...

Right I have know about this being created for a while and I know it has had it set backs but it has finally dropped and I got the creator in to chat about it. I can't lie I have played it while its not polished its reminds of the old school games an...

Well this has been in the planning for a while but was going to be about the brilliant community project he runs little did I know he was creating to and when he said he is has a little something dropping I was shocked to see the level of work he has...

Starcards are going Anarchy on Wax

So as you can guess Starcards are back with a brand new drop and as always I have been chatting to Victor all about what's coming up and do they have something for you guys . Hey Crackers! How are you doing my friend? Good and you? I’m doing amazing...

I finally found another Irish NFT artist that work is in the WAX Blockchain but he works on other blockchains as well he is still finding his way on WAX so I thought getting his work out there might expand his community because he his work is class....

Meet the artist behind two cool projects where they are both different but similar she has not been on the scene quit long but her works really stand and can see this project getting a quite a lot bigger so check out what the artist has to say. Hey...