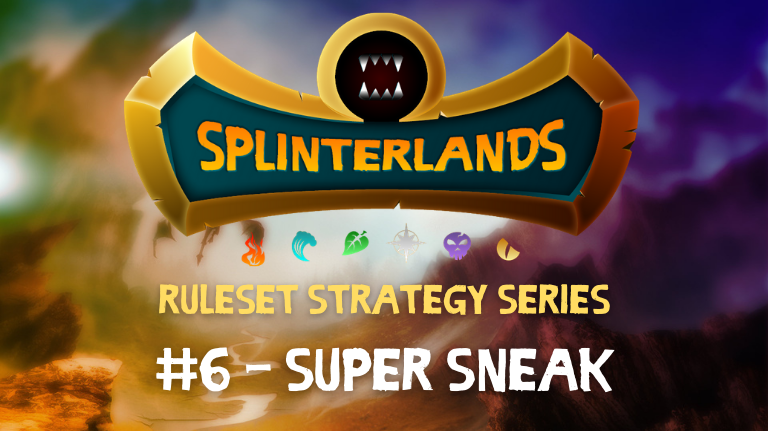 Welcome back to the Ruleset Strategy series, the series in which I take you one by one through the 27 Rulesets of Splinterlands.

Today we're talking about one of everyone's favorite Rulesets. In Super Sneak, everybody with Melee attack has Sneak (just like it sounds). No matter how it breaks down, it usually makes for an edge-of-your-seat battle... It's a tough one. Your first instinct will be to pack your lineup with as many heavy-hitting Melee attackers as you can, hoping they will simply tear through the enemy's team from the back. Unfortunately, since the other team also has Super Sneak, you've got to strike a balance between protecting yourself and making the most of the Ruleset. In finding this balance lies the true genius of a winning Super Sneaker. I know this can be a little more difficult when playing in the mobile browser version, but I have found that thinking backwards on Super Sneak battles is quite effective. I don't mean that you should completely assemble the team in reverse order, but you should figure out which Monster goes in back first. The back is the most important position in Super Sneak.

There are 2 basic ways to go when deciding on abilities to use in the back in a Super Sneak battle. The first is to pick a Monster that damages those who attack it, such as one with Thorns or Retaliate. If done correctly, this method can take out the majority of your opponent's Melee attackers in a Melee-heavy match. The second method is to pick a Monster that takes a long time to kill. The Shield ability is crucial when trying to simply take as many hits as possible in the back, but you could also use Dodge and high Speed to accomplish the same thing. It's easy to get excited about the whole sneaking thing and forget that you have to fortify your front line. Remember that every Range Attack and every Magic attack will still behave completely normally in this Ruleset. That means it's up to each individual player in each battle to decide how much to use Super Sneak (or not use it).

I like to take the fortification of the front a little further by always including a good Reach monster. That's the one that allows a Melee attacker to attack from the second position. My strategy on Super Sneak is usually to fill the ranks, packing 0 and 1 Mana monsters into every nook and cranny. As long as I have the front and the back well-protected, those little monsters last a long time and do some real damage. When selecting your tank, you'll want one that does a lot of damage with each hit (Trample and Piercing are also great), but not necessarily high-Mana.

In Super Sneak, your highest Mana cards should usually be in the back half of your team.

Spread it out with Snipe

You don't always know which enemy Monster the Snipe ability will target, but Snipe is great to spread out the damage in Super Sneak. Basically, you run the risk of concentrating too much attack power onto the back row while you're getting pummeled from the other team's middle. To take care of the middle Magic and Ranged attackers, use Snipe, especially with Blast. Some good cards for Super Sneaking

Here are a few cards that I like to use in Super Sneak. Obviously I'm not claiming that these are the best cards or anything. You think I'm good at this game? Ha! I may have battled many thousands of times and I may be fairly good at throwing some words together, but I have a lot to learn about Splinterlands. Anyway, here are some of my Super-Sneaking friends. This mech dude is my favorite for Super Sneak. He only ever has a single Health point, but his Armor goes up and up with each level. There are very few Sneaking monsters that use Magic attacks, so the Defender is an excellent candidate for the way back in this Ruleset. He never quite works as a tank, but from the back, with Thorns put to proper use, the Defender can make sure the enemy's sneakers are ready to be taken out by your tank.

I'll be totally honest. I've never even played with Hydra. I decided really early to sell my Hydras instead, a decision I tended to make a lot in the early days with some of the more valuable cards. Plus, Hydra is so good in the back that it almost takes the fun out of making a team. Every time I face Hydra in the back, I lose, and I lose hard.

The Chain Golem is versatile, but almost always great in the Super Sneak Ruleset. It can be used in the front or the back, taking full advantage of its native ability of Shield. And like most Legendaries, as you level up, it keeps getting better. The Sea Monster has one particular ability (Healing) that makes it very useful in either the front or back in Super Sneak. Personally I prefer to use it in the back because of its lack of Armor. It's more of a toss-up in the front, but if you get lucky using it in the back, it will heal as quickly as it gets attacked.

If you really want to throw a wrench into your opponent's plans in Super Sneak, use the Taunt ability. They think they know who is going to attack where, but with Taunt, everyone attacks the taunter. The Kraken is a "taunter" simply because it is so big no one can not attack it. Try it out. You'll like it, except in low Mana battles. It's pretty Mana-steep.

If you have any great Monsters or Summoners to suggest for the Super Sneak Ruleset, please let me know in the comments so that everyone can benefit.