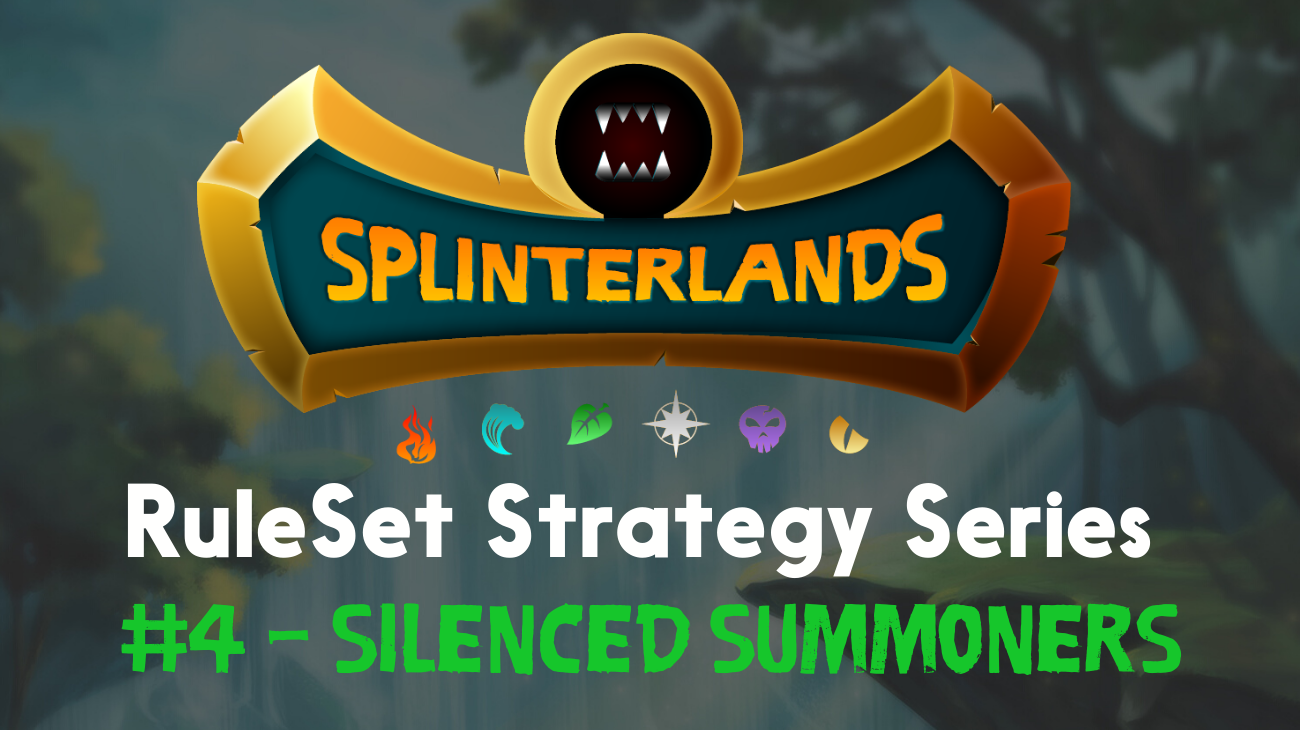 Good evening Gamers and strategists! The Splintral skies are clear and the Splintral seas are calm, with a relaxing wind coming ever-so-slightly from the north, according to the weather wizard who lives at the pinnacle of Mount Mox. This evening's forecast is, as expected, darkness, which shall remain until the morning, when scattered light shall prevail. 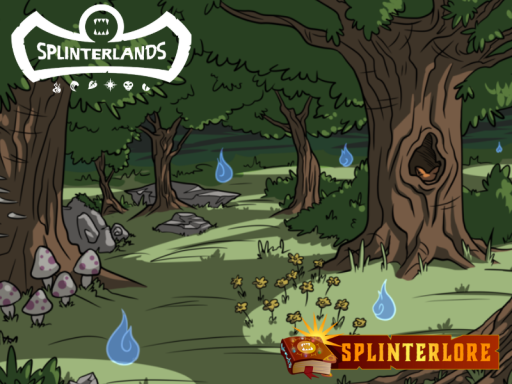 Here we are again, knocking them down one by one with the RuleSet Strategy Series, the series in which I take you through each of the 27 Splinterlands Rulesets. Summoners do not give any stat buffs or debuffs or grant/use any abilities.

I love Silenced Summoners for one reason: It temporarily simplifies the game. In every other Ruleset, Summoners can be counted on to provide buffs to your whole team. Even in Back to Basics Summoners are allowed to use their abilities.

The more layers of strategy through which a player's decisions must pass, the more guess work and chances are involved in Splinterlands. Another way of saying this: More "combos" = More randomness.

In Silenced Summoners, each player is able to overlook the Summoners' abilities and buffs entirely, focusing only on the Monsters. This puts both players in a situation of greater control over the battle's outcome. What they do with this control is up to them. A Summoner can be selected easily by just picking the one from the desired Splinter with the lowest Mana cost. I'd like to share a (relevant?) anecdote from my high school days, when I used to run long distance.

At the city finals race one year. the weather was terrible. Hours of downpour, flash flooding and the works. Luckily there wasn't enough lightning for it to be considered dangerous, so we raced anyway. There was a lot of griping from everyone on all teams. Many runners wiped out, lost their shoes, ran slower times and went through every other sort of unexpected calamity thanks to the weather.

I didn't complain. I got psyched. I had a realization that day and I remember it like it was yesterday. We all have the same weather. I knew that it was up to me to either call it a disadvantage or an advantage, and I was going to make sure that I had the advantage. I ran a personal best mile time that day, and it was the second split of a three-mile race in a flood.

Both players have the same Ruleset. All that matters is what you do with it.

This is incredibly simple in Silenced Summoners: Go with whatever Summoners you have. It's definitely better to use 2-Mana Summoner than a 4-Mana Summoner is you are able, but if 2 Mana is making the difference between victory and defeat for you, chances are you're doing a few other things wrong. Basically, I wouldn't break your bank to have low-Mana Summoners just for a slight edge in a single Ruleset. This game is big and must be played with a wider scope. I'm not going to recommend a particular Splinter over another, since with nearly 300 total cards now, they are all very well balanced. Like with any Ruleset, the best team to use is always the one with which you're comfortable. Because Summoners offer no buffs in this Ruleset, you need to buff the buffs of your Monsters. There are at least a few Monsters with each type of buff and debuff, and you can usually benefit from reserving some Mana for them in Silenced Summoner battles. Here are my 3 favorites.

Protect (Defender of Truth) - Everyone on your team gets +2 Armor. How can that not help?
Demoralize (Molten Ogre) - When you really want to show 'em who's boss, reduce theirs instead of enhancing yours. They'll lose crying.
Headwinds (Light Elemental) - It can be hard to work into your team, but this is basically Demoralize for Flyers.

Beyond that, there is not much specific advice to give about Silenced Summoners. One more thing you should remember (to repeat myself) is your enemy faces the same obstacles and challenges as you. They will be using many of the same techniques to defeat you, and they want it just as badly. This is why you must always try to anticipate the moves of your opponent using every resource available to you. Here are a few good cards to play in Silenced Summoners with a brief explanation of why.

Lord of Fire is all about the buffs. The best thing about the LOF in Silenced Summoners is that his relevant abilities come early. At level 2, for only 3 BCX, he gets both the Strengthen ability (which adds 12 Health to everyone on the team) and the Silence ability (which reduces the Magic attack of the entire enemy team). Both of the abilities gained as the LOF advances further (Affliction, Shatter) also play unique roles in this Ruleset, making the Lord of Fire one of my absolute favorite cards in Silenced Summoners. The Crustacean King is an OG favorite from the Steem Monsters days. Not only is the king armored and embedded with the Tank Heal ability from level 1, but at level 6 (52 BCX) it gains the coveted Protect ability, adding Armor to your entire team. Crusty is a powerhouse to say the least. When the Wood Nymph reaches level 6 she gains Strengthen, which increases the Health of the entire friendly team. When combined with her native ability of Tank Heal, Strengthen is extra effective. When every Monster gains a Health point, they can also now be healed to that point, a detail which can make all the difference. Even on its own, Tank Heal is an imperative ability in the Silenced Summoners Ruleset.

If you don't get your Light Elemental to level 4, then it's not ideal for Silenced Summoners. But once it hits 20 BCX and gains the Headwinds ability, it becomes an excellent addition to the Ruleset. If you can get this beast of light all the way to max at 46 BCX, it also gets Blind, which increases all chances of missed attacks. Goals, right? Hey, I've always thought that Epics are the easiest to max first. Here's one that even the Bronze players can enjoy. He's got Demoralize right from level 1, a very rare occurrence in Splinterlands. With a single BCX of a Common Molten Ogre, your enemy's entire team's Melee attack is reduced. He is expensive on the Mana, but almost always worth it when playing in Silenced Summoners.

Legendaries may carry higher price tags due to their rarity, but the other side of that coin is how easy it is to level them up. With only 5 BCX of Ruler of the Seas, you can buff your whole team's Speed with Swiftness and debuff your enemy's team's Magic attacks with Silence. Then it's entirely up to you whether the additional 6 BCX for an additional Magic attack point is worth it to go for max.

Some Silenced Summoner Battles to Watch

Who better to learn from than the Champion of Splinterlands? In the Top Battles tab, you can watch any of the top players' battles. If you'd like to watch some of my battles (I'm not that great) or the battles of some Splinterlands player that you strategically admire, all you have to do is type their name into the search bar on the Battle page. (Great idea @marianaemilia!) I hope this edition of the Ruleset Strategy Series has been helpful to you in some way. Remember that I'm no expert; I'm just a regular player who has battled 16 or 17 thousand times and spends nearly 100% of my waking hours creating Splinterlands content.

As with most things in life, there are always multiple correct answers in Splinterlands, plenty of different perspectives that can completely change the outcome.

Do you have any favorite cards to play in Silenced Summoners? Tell me about it! Share some of your secrets, but not all of them. Not. All. Of. Them.