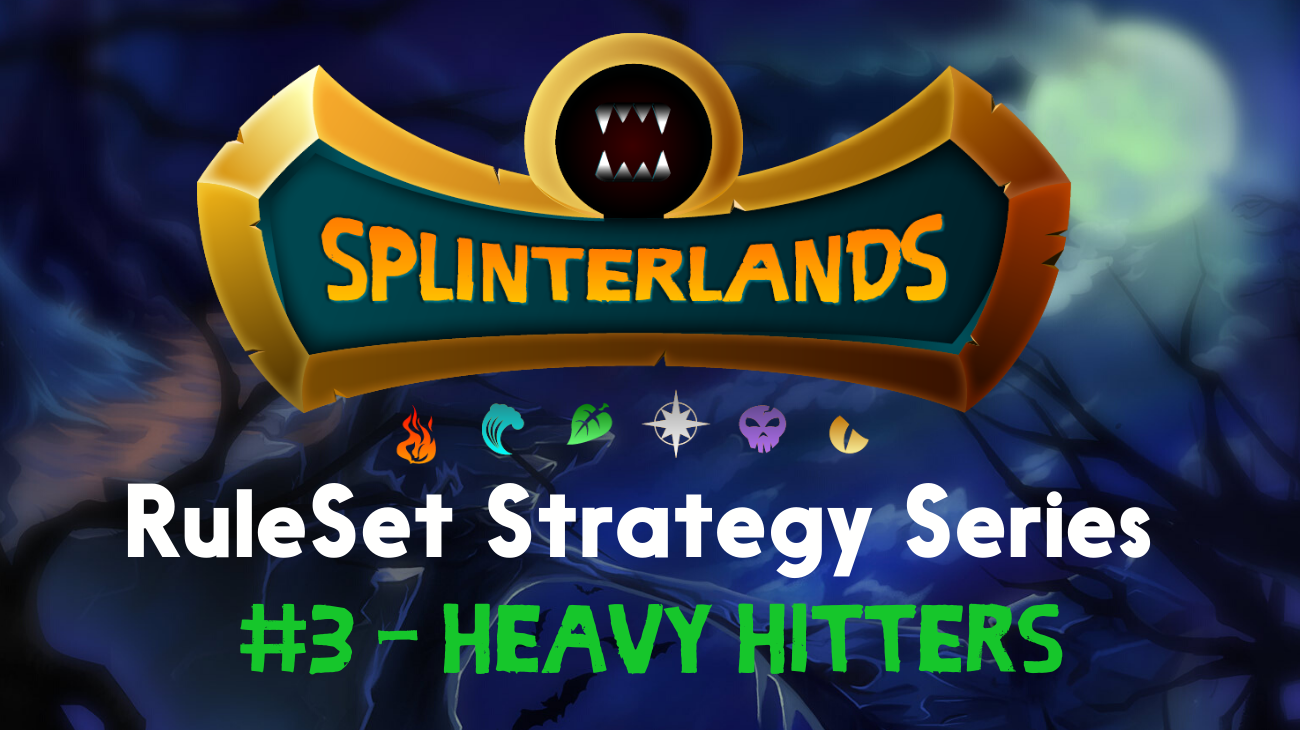 We're back again Splinterlanders for another round of the RuleSet Strategy Series, the series in which I run down each of the 27 different Splinterlands RuleSets, one by one.

For more details on RuleSets and a full list with enlarged icons, visit THIS POST. And without further ado, let's get into today's RuleSet. Heavy Hitters is one of the most recent RuleSets to be brought into the game, and if we're being completely honest, most players probably don't know it by name. Instead, they simply think of it as "the one where everyone gets Knockout."

Heavy Hitters: All Monsters have the Knockout ability.

I have noticed quite a bit of confusion about both the Heavy Hitters RuleSet and the Knockout Ability. The way that the RuleSet works is simple: every Monster on both sides gets the Knockout Ability added. The next natural question that must be asked is How do you make the most of Knockout? Let's take a look.

Interesting. So Knockout is itself connected to another Ability, one with which everyone is familiar: Stun. When a Monster on the other team is stunned and they are attacked by a Monster with Knockout, double damage is dealt.

How to Make the Most of it

The clear conclusion to be drawn is to make the most of the Heavy Hitters RuleSet, use more Stun. There are a lot of Monsters with Stun, and I will list a few good ones below, but simply including Stun on your team will never be enough. Your Stunners need to be placed carefully and protected long enough to actually land some double-damage attacks.

Heavy Hitters, though simple in its solution, is heavy on the strategy. I have felt sweat on my brow and my palms on multiple occasions while trying with only seconds to go to assemble a team in Heavy Hitters. Here are some of the cards that I have used to help me win (sometimes) with a brief explanation of why. Spoiler: Most of them have Stun. By almost obligatory inclusion, the Goblin Mech makes the list again. It is honestly one of the most useful cards in the game, especially at lower levels. With Heavy Hitters, you'll really need to have your Goblin Mech at level 6 to make the most of it. That's when the Mech gains the Stun ability. By the way, if you use the Goblin Mech as anything but a tank, you will lose.

The Cyclops is a Rare Neutral card from the Beta series, and it has always been a great back row card, especially when you're hoping to Stun your enemy. Again, the Cyclops does not gain the Ability until level 6. Another advantage to using Cyclops in the very back is that you can benefit from his earlier Ability: Shield.

We have had a powerful Melee attacker and a shielded Range attacker, so let's take a look at a Magic Attacker, none other than the one eternal Queen of the Lord of Darkness. She is Flying, so absolutely perfect when Heavy Hitters is found in conjunction with Earthquake. She gains the Stun Ability at level 4, only 8 BCX (Base Card eXperience), with a formidable 3 Magic attack. She is also available in both Alpha and Beta on the market, with Alpha cards earning players a 10% DEC bonus when used in battle.

Once upon a time, Medusa was the poor player's Stunner. She is a low-mana, hard-hitting Magic attacker from the Water Splinter. Stun is her only ability, she gains it at the low level of 3, and she wears it well. She is comparatively more expensive than most other Rare cards, mostly because so many players have learned to regard Medusa as an indispensable part of their collection.

Here is a card without the Stun Ability to give you a slightly different perspective and to encourage you to think out of the box. The Taunt Ability can be valuable across a number of different RuleSets, since it takes the pressure off your tank. In Heavy Hitters, you can simply place a Taunting Monster like the Shieldbearer somewhere in the middle of your team. Then design the rest of your team to quickly Stun, then destroy your enemy before they know what hit them. Sometimes having the advantage of a single extra attack is all it takes to turn defeat into victory.

Finally I would like to remind you that at the max level of 4, the Legendary Chain Golem gains the Stun Ability, making it an unstoppable fortress of perfection in the Heavy Hitters RuleSet. It's not as though we can all afford max Legendaries with which to battle, but look at those Abilities!

I hope this edition of the RuleSet Strategy Series has helped you become more of a Champion in the Heavy Hitters RuleSet!

Do you have some favorite Heavy Hitters of your own? Share them in the comments and let's talk about it. And I'll be back in a couple days with the next in the Series: Silenced Summoners.