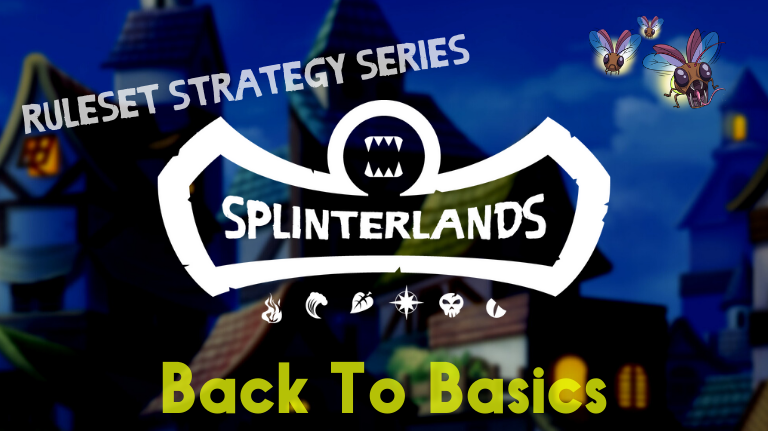 RuleSet Strategy Series - Back to Basics

You never quite get the Ruleset you're hoping for, do you Splinterlander? There are 27 different Rulesets in play to be precise, and in any given Splinterlands battle there can be either 1 or 2 of them. Check out THIS POST for a complete list with enlarged icons and definitions of each one. Today I'll be talking about a Ruleset that appears simple on the surface, but contains several hidden complexities, elements of strategy that are easily overlooked. I'm talking about... Ironically, the Standard Ruleset probably more aptly deserves the name Back to Basics because it was the most basic version of the game, before Rulesets were even added. But when you consider the effect of Back to Basics, the name fits quite well.

I have heard that many Splinterlands players dread this Ruleset, never quite knowing what to do with so many choices of cards and no abilities to guide them. I have always had great success in this Ruleset, I think because i am able to rely on certain patterns, thanks to the limitations of the opposing team (which are the same as mine).

Imagine a big dial that had two selections: Chance and Strategy. The Back to Basics Ruleset simply turns the dial a little bit more toward Strategy. It gives the player a little more predictability and control, over both their team and their opponent's. Some players like this and others do not.

In the early days of Back to Basics, everyone was using the Peaceful Giant. Now there are several effective ways of taking down that huge, peaceful buffoon and crushing the team of ranged attackers standing behind him. How to Build a Basics Team

One of the most simple things to do when putting together a whole team in Back to Basics that I would never recommend in any other Ruleset is going for the highest total Health.

The selection of your front tank is of utmost importance in Back to Basics. Since there are no abilities, it's best to use a tank that gets maximum benefit from the summoner buff, but is also strong in these three areas: Health, Speed, Melee Attack.

Remember... there is no Thorns, no Enrage, no Retaliate... it's a different ballgame. Some of your most reliable tanks will prove useless in Back to Basics, especially ones that rely on Shield or some other defensive ability.

Choose a tank that has not only high Health to withstand a few Magic attacks, but armor to negate the Melee and Range Attacks as well. There is no Sneak and no Snipe, so all the enemy's attack power will be focused on your front card, so it needs to be prepared to take 10-12 hits if possible. Unless you have a super secret weapon of a second tank, you really need to maximize every card's attacks to take a victory in Back to Basics. Magic is best, as it is not stopped by armor and there is no need to fear Reflect or Void in this ruleset. I like to put one powerful ranged attacker in the very back, but this must be done carefully. If the final ranged attacker is left alone on the field, the battle is as good as over.

One rule that I try to live by with Back to Basics is E.I.A.A.
(Everyone Is Attacking Always).

Armor is Your Friend

In the Back to Basics ruleset, try to use as many armored monsters as possible. Each of them will take an extra hit, which can make or break you in these battles. An armorless attacker will often be slain before it is able to get a single attack off in Back to Basics. On the other side, you must assume that your enemy is taking all the excellent strategy measures that you are, so you must ask yourself: How do I get past their armor? The answer is (and has always been) more Magic.

I have noticed that many newer players overlook the fact that while Monsters' Abilities are lost in Back to Basics, Summoner's retain theirs. That means that the Summoners' buffs and abilities are the only ones you get to work with in a Back to Basics battle, so you better make the most of them!

Tyrus Paladium adds one Armor, Malric Inferno adds one Melee, but my personal favorite has always been Alric Stormbringer with his plus one Magic attack. A team of 4 Magic attacks enhanced by Alric's buff rarely loses in Back To Basics.

Hopefully now you've got some of the basics of crafting a good team in Back to Basics. If none of this is helpful to you, feel free to lose a bunch of times until you figure out a better way! I know you can do it; I believe in you!