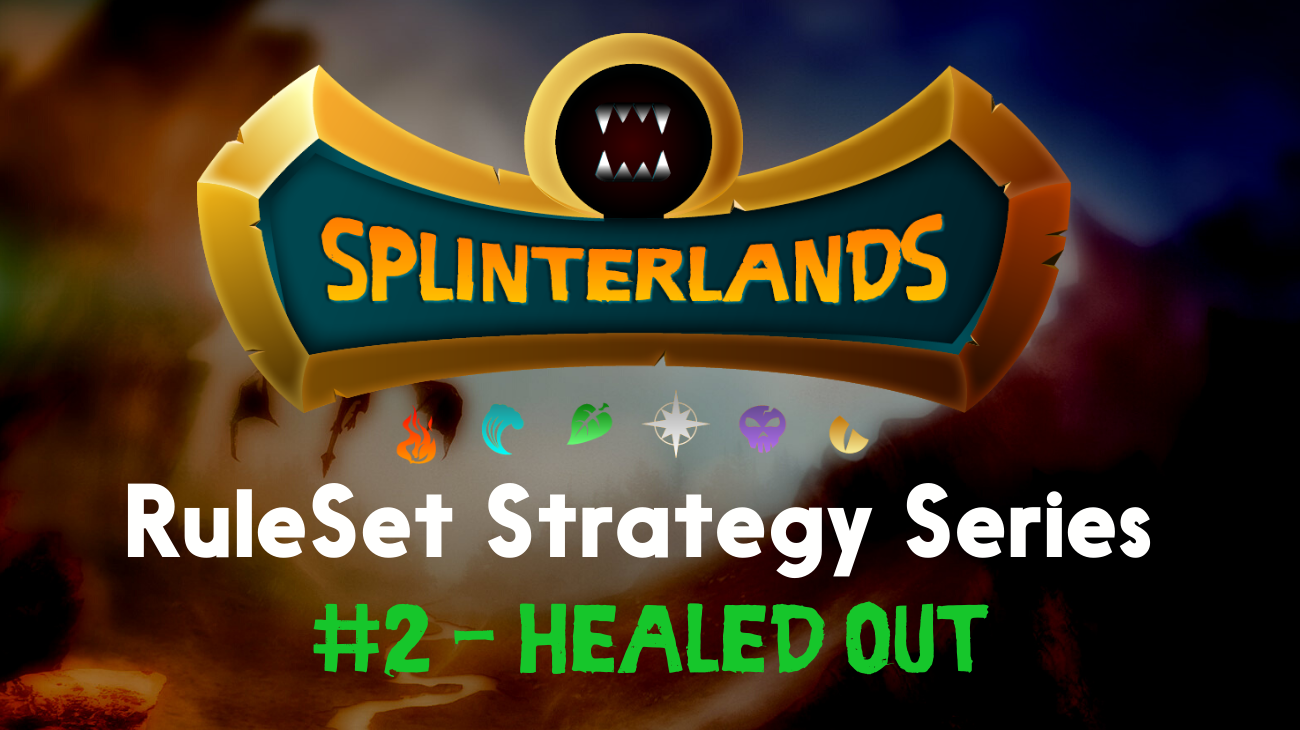 We're back for round 2 of the Splinterlands RuleSet Strategy Series!

It's the series in which I take you one by one through the Splinterlands RuleSets, giving you the information that you need to know to find certain and heroic victory on the battlefield.

Rulesets quite literally change everything from one battle to the next in Splinterlands. Today I'm talking about a Ruleset that must be terrifying for the Monsters...

That's it. The Healers have had enough. Their all healed out and they just cannot heal any more. They can still play if they want, but they can forget about those valuable Healing abilities.

You may not even realize how highly you have been valuing Healing abilities until you run into the Healed Out Ruleset. Many strategies hold at their core some kind of Healing ability without which the strategy would fall apart. If you plan on keeping your tank alive for just a few more turns, you can usually only do so through Healing, Tank Heal, or both. What Works and What Doesn't?

With the Healed Out Ruleset, it is important to know the specific details of how it works. Not every ability that involves some kind of healing counts technically as a Healing ability.

The Healed Out Ruleset eliminates the effects of 3 Abilities: Healing, Tank Heal, and Triage.

If you read that last sentence closely, you may have realized that Repair, Life Leech and Scavenger are still perfectly effective. This means that you can still heal your team, even without the use of those Healing abilities.

In Healed Out, a strong focus should be placed on Armor so that your team can take as many hits as possible. When most of your cards start the battle with Armor, they can also be Repaired, which is essentially Healing for Armor. It may not protect against Magic attacks, but it does the trick against the Melee and range attacks. With double-Repair working on a well-armored tank, any team can be difficult to beat. If a Vampire needs to consume the lifeforce of others to survive, it can hardly be considered healing. Life Leech works extremely well in Healed Out battles, especially if placed near the back. By the time the Monster with Life Leech reaches the front row, they may have double-digit Health, offering your team a renewed tank.

The Scavenger ability was awesome to begin with. It allows Scavengers to gain one Health when any Monster died on either team. Scavengers can't stop scavenging just because healing isn't allowed. It's the circle of life, after all.

In the Healed Out Ruleset, the Scavenger ability is even more powerful, for two reasons. First, because of the no-healing, cards on both sides are dying much more quickly, so the ability is triggered more often. Second (and obviously), Scavenger presents a unique opportunity to heal when healing is not allowed. Focus on the Health

Remember that the Health you start with is all you get, and this is especially true in the Healed Out Ruleset. It is absolutely crucial to choose monsters with the Health necessary to outlast the other team's. Outlasting is more important than destroying in this Ruleset.

While Armor can be enticing, you should always remember that it is not Health. Magic attacks cut straight through Armor, and almost every Splinterlands team has at least one Magic attacker.

Some Good Cards for Healed Out

Here are a few cards that I like to play in the Healed Out Ruleset. Keep in mind that there are always many other variables to a battle that help you decide which cards to play. It is hard to generalize, but for the reasons described above, these cards are all great!

He may be slow, but Torhilo has some incredible abilities. None of them are Healing, and they are all awesome. At higher levels, he gets Shatter and Last Stand, like he was born for Healed Out. He had Void starting at level 1, keeping him alive that much longer in the face of Magic attacks. The Vampire has Life Leech and a powerful Range attack, especially at higher levels. He also gains speed very quickly, causing him to dodge some attacks while he's in back. Usually this means that by the time the Vampire reaches the front, his Health is HUGE!

She may not be the most popular card out there, but certain Rulesets are her time to shine. Healed Out is one of those Rulesets. The Naga Fire Wizard has Shield, an extremely valuable ability when healing is scarce that protects against Melee and Range attacks. And at level 5, she gains Thorns, making her an unstoppable fortress of destruction in the back. He's my second favorite card with Repair (my favorite is Armorsmith, the one that looks like me), but my go-to Range attacker in the Life Splinter for the Healed Out Ruleset. He doesn't get Repair until level 5, so i wouldn't recommend using him in this Ruleset before then, but paired with a good heavily armored tank, the Boatman is tough to beat.

It's the underbite warrior with the golden axe and the silver shoulderpads! I love this guy. He's my favorite tank most of the time when I play with Earth, and he does not disappoint in Healed Out. Not only does he have a 3 Melee attack at level 1, but the Retaliate ability all along. This allows the Orc to sometimes take out the enemy's tank inside of a single round. Throw Enrage into the mix at level 5 and your enemies will surely perish. There aren't many Rulesets in which using Goblin Mech is a bad idea. Still, I have always found the Mech to be extra effective in the Healed Out Ruleset. Piercing allows it to take out the enemy cards more quickly. In a winning battle with the Mech in front, the Mech usually does 3/4 of the killing. It has huge Melee attack power with Piercing, and it starts off at medium Speed, only getting faster as it levels. When it gains Stun at level 6, the Goblin Mech is entirely playable at the Champion level.

Hopefully this article has given you some insight into the Healed Out Ruleset, including how to use it to your advantage on the Splinterlands battlefield!