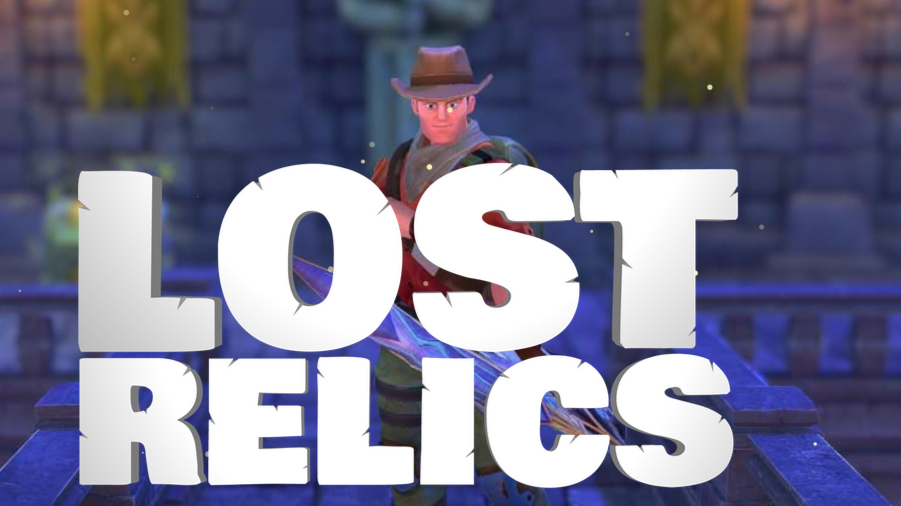 A few weeks back, I wrote about a contest that was taking place across multiple games. This is a look at one of those games, Lost Relics by Codebit Labs. This title is technically not fully released, but is publicly available as an "Early Access" version of the game. Lost Relics is an on-line action-adventure dungeon crawler for the computer with some massive multiplayer elements and blockchain items thrown in.

Currently, all of the adventuring parts of the game are single player content. The town is the only place where you will encounter other players and the main interaction with them, in the game at this time, is trading at the Royal Emporium, which is essentially an auction house. Multiplayer adventuring has been promised as a future addition, and is a planned part of the full game.

Outside the tavern of Talmuth, the central city of Lost Relics.

The combat is fairly simplistic at this point, with either a bow or melee weapon. The left mouse button does a basic attack and the right mouse button does a special attack that uses energy, the blue bar on the screen shot above. The green bar indicates your character's health, which does not automatically regenerate inside dungeons.

Items have various ranks, grey items being common, green being uncommon, blue being rare, purple being "Epic", orange being "Legendary", yellow being "Mythical", and red being "Transcendent" - the most powerful items in the game. Weapons, while having different graphics and story text, seem to be functionally identical within the same rank, i.e., a blue melee weapon does more than a green melee weapon, but the same as any other blue melee weapon.

Enemies have a red health bar, which can be seen over the almost deceased wolf.

Aside from weapons, you can equip a pet, which is just for decorative purposes currently, a resource gathering tool, and up to four other items. These other items can be single-use resources, like healing potions and bombs, or things with passive bonuses, like rings that regenerate up to a certain amount of lost health or maps that reveal locations on the mini-map. You can also carry up to 16 other items in your inventory, though they cannot be used or equipped - these slots are really meant for holding items found in dungeons to bring them back to town.

There are two types of items in the game: virtual and blockchain. Virtual items exist only within Lost Relics and are lost if you die while carrying them. Blockchain items exist as Enjin coin-crafted tokens, which can be moved out of the game into an external wallet. This makes them able to be bought and sold outside of the game itself.

The stash, located in the Tavern, is where you can store items or switch out what you have equipped.

As of the last patch, you need to use a Transfer Crystal to move an item out of the game to a wallet. These are currently priced at $20 for 62 crystals. While the game is free-to-play, it has also added a "Premium" level of access that is sold at $20 a month, or $55 for three months. Certain dungeons are only accessible to paid accounts and you are limited on the number of items you can leave a dungeon with on a free account.  Moving items over the network isn't free, so the transfer fee addition makes sense.  I also don't fault the developer for wanting to get paid for his efforts in making the game.

Gold is the main currency in the game, and the main reward you will find in dungeons. There is a shop in town where you can purchase various items and the Royal Emporium where you can try to buy, or sell, items from other players. The main focus of the game at this point seems to be to grind for gold and crafting items.

Outfits are just different graphics that will represent your character in the game. They currently have no impact on stats or gameplay.

Crafting is intended to be a big component of the game. There are four skills that you can level up to gather crafting materials: fishing, mining, scavenging, and woodcutting. There are two actual crafting skills: alchemy and engineering. Alchemy lets you make potions, which seem to be needed for healing in this game after the first dungeon. Engineering lets you make bombs and higher tier gathering equipment.

It is possible to gather monster drops to build scavenging gloves, then scavenge for resources to build a fishing net. However, for mining or woodcutting, I don't see how you can get the resources to build the initial harvesting equipment without already having a pickax. You can buy one from the shop for a thousand gold, though at this point you can likely get the needed items cheaply from the auction house.

You can see all of the crafting recipes from the little book icon, right before the experience bar.

You get experience points from killing monsters and opening chests in dungeons, but gaining levels seems to have no real impact at this point. Gold seems a bit hard to come by early on, with the first dungeon giving about 25 for fully clearing it, which is fairly easy to do with green, uncommon, items. I found the second tier dungeons to be difficult to survive without blue, rare, weapons or healing potions, but provided about three times more gold for clearing it.

Blockchain items were far more common prior to the current patch, but do still drop. I found one uncommon crafting material out of four runs through dungeons while working on this article. Granted, that item is worth about one cent of Enjin coin and it would cost more than that to transfer it out of the game. So, nothing to quit your day job over quite yet.

One nice feature is that you can see what resources can be found in each adventuring area.

There are currently no quests in the game or anything in the way of story. Some simple quests were removed with the latest patch, and new ones are planned to be implemented back in relatively soon according to the developer. In its current state, the game is about grinding through randomly generated dungeons for loot.

The gameplay feels similar to other dungeon crawlers, with combat mechanics similar to Diablo - the most famous of the dungeon loot fests. It does feel much simpler than that much older title, but the game is still a work in progress. It is also an impressive game considering it's currently the work of a one-developer studio.

I'm not going to rate an unfinished title, as the gameplay has changed drastically with the last patch, and will likely change much more in the future. The game is challenging as a new player, but if you find grinding for loot relaxing then you might like this title. I do wonder if adding blockchain items will make the game stand out from other titles, such as the free-to-play Path of Exile, or paid titles like Diablo, Torchlight, or Grim Dawn.

The developer is working actively on improving the game and is very open to communicating with the player base over social media. If you want to check out Lost Relics, you can download it from the official site here. It is free-to-play, so if you like dungeon crawling, I would suggest at least checking it out.