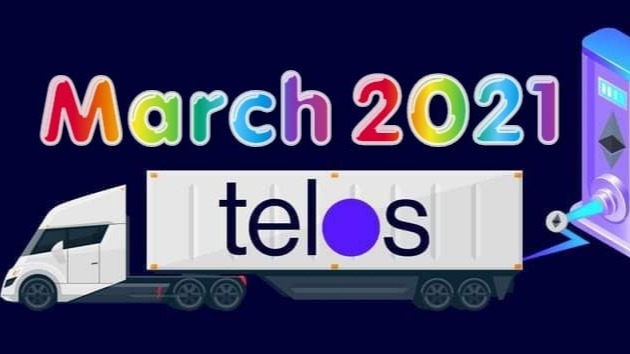 The Month of March 2021 for Telos has been a blast. The main goal is still executing the TULIP to pump the liquidity of the Utility Token itself both Native and the ERC20-Ready Telos (TLOS).

The End of March is actually the end of the First Quarter, year 2021 (Q1-Y2021) But we will focus on this month alone to itemize all that we have gone through. Since Douglas Horn, our Senior Architect will be providing us with a Quarterly report on April 7, 2021. It is a great time to reminisce what has just recently experienced.

This month, the most powerful and the fastest blockchain in the world came up with a great hash-tag from Douglas,  impromptu answer in the latest AMA. This will now be...

Let's look at the Road-Map First: 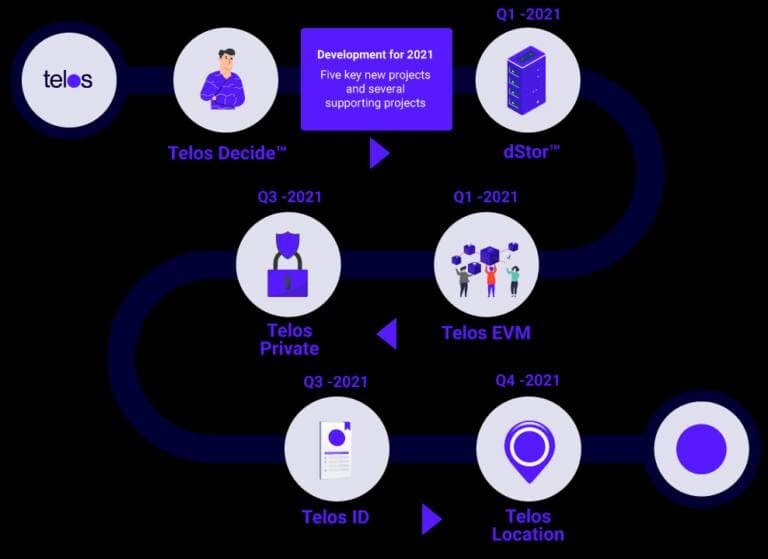 The Top 3 Milestones Of Telos:

1). The Successful Token-Sale on Bounce Finance which led from one triumph to another. 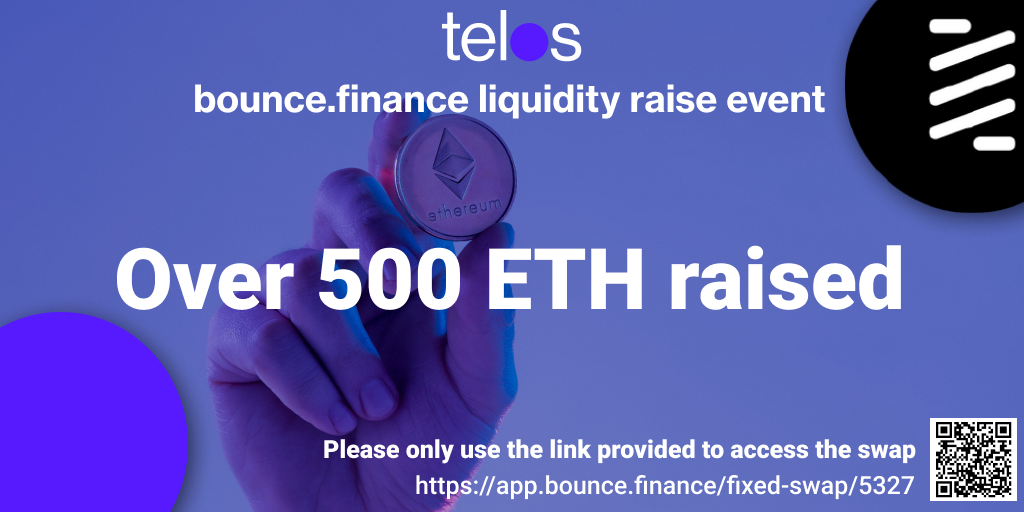 On the first day of March alone, the ever hard-working block-producers or what we often call validators have determined the price details of the said token-sale. The initial pricing was 1.0 ETH = 3000 TLOS (approx $0.50/TLOS)

With the united efforts of all community members and the marketing campaign's newly acquired account holders raised  500 ETH which is now $916,425 at the time of writing this blog.

2. The Telos (TLOS) ERC20 Token Got Listed on Uniswap (Now the token is already lying in the ETH blockchain) 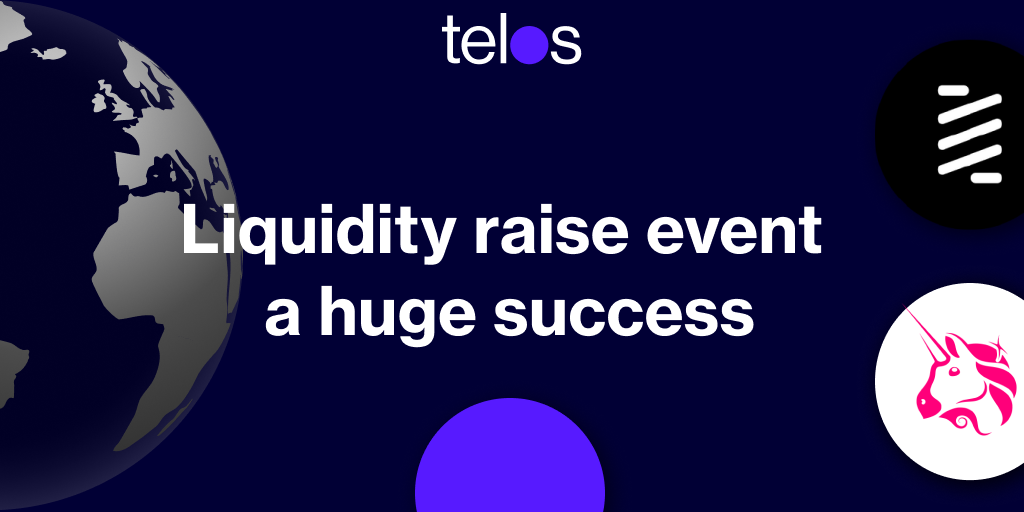 Since the Liquidity raise have been a HUGE success, For the Telos blockchain, and particularly for us here at the Telos Foundation, without funding, it has been challenging to bring TLOS to more markets and get the word out about the amazing things people are doing on Telos every day. This liquidity will then be used to deploy marketing strategies which involves creating various activities for all community members, value the investors, attract more developers, and enhance the infrastructure which we all know costing Millions of Dollars. It was quite a challenge to get here. But now we have the fuel and the sight of destination is clearly seen on the horizon. We are all up to the challenge.

Since the Uniswap platform is the first DEX of this year 2021, this is a great jumpstart to add further exchanges from time to time.

Here is a comprehensive step-by-step guide on how to purchase Tokens on Uniswap:

3). The Bridge Have Opened. 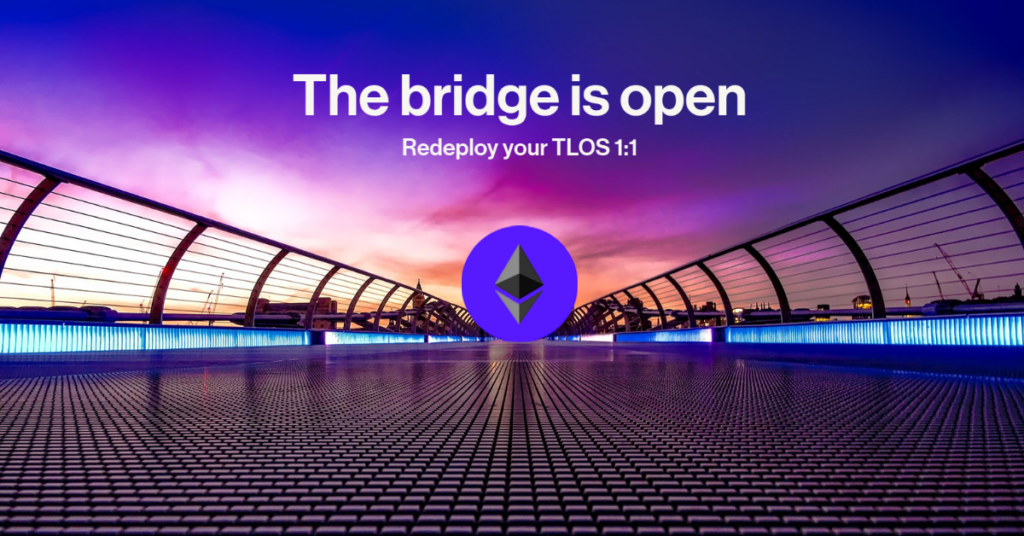 If we already have TLOS ERC20 Tokens on Uniswap, we can now participate in the Yield Farming of Telos. The ultimate purpose of the DeFi (Decentralized Finance). 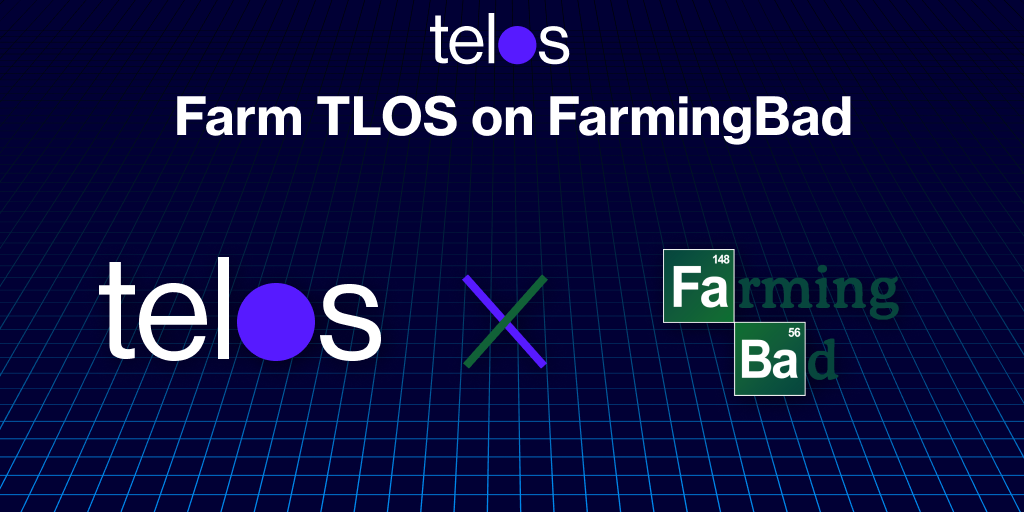 If you heard more about staking from other projects before, then the DeFi will definitely blow your mind since in the program offers an APY rate based on the number of members farming in this platform. 24 hours after the launching, we have closed to $300,000 TVL. The current APY to date is 335.463% and we now have $495 Million in TVL. 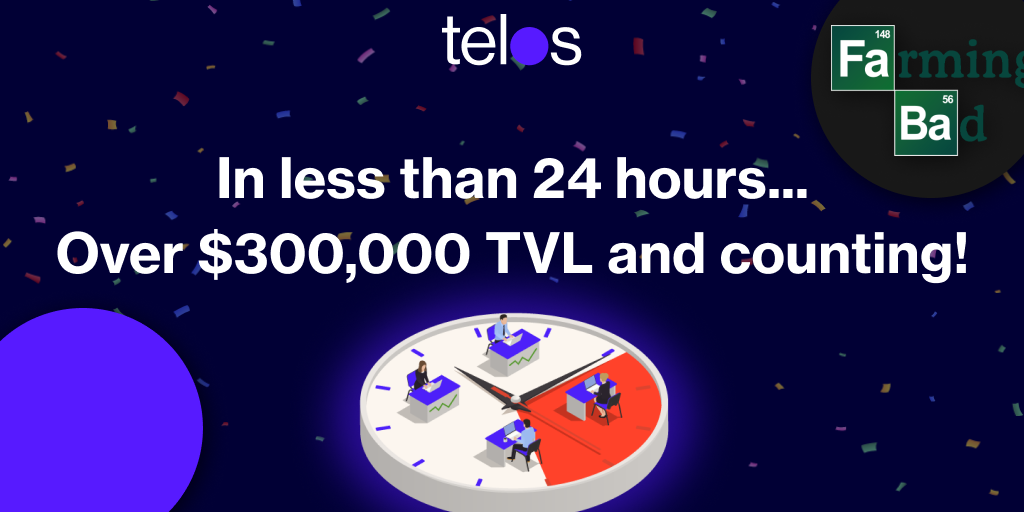 Such a great achievement in 24 hours time-frame indeed. For reference, and to join as well, please check https://telos.farmingbad.finance/

5). The ERC20 TELOS (TLOS) Got Listed on MXC - The Largest Exchanger in Singapore 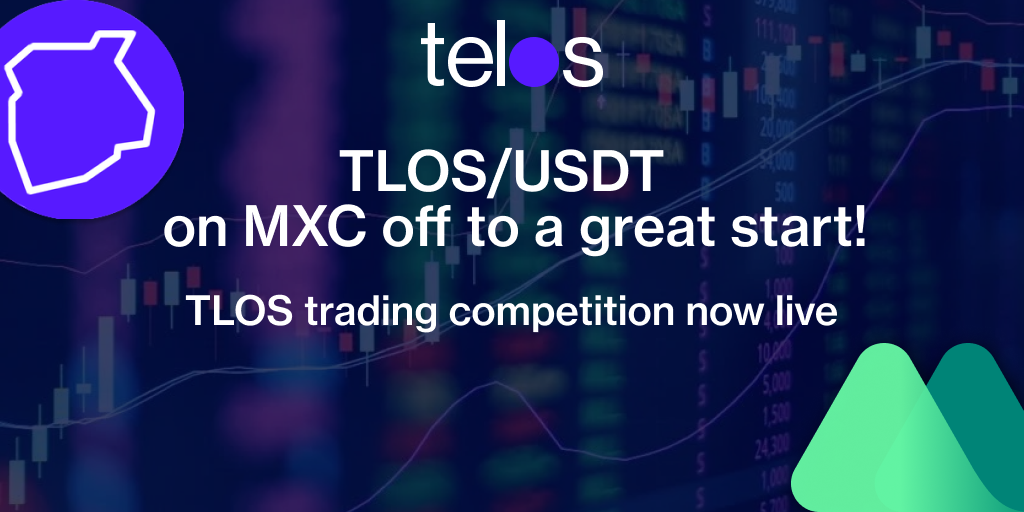 The ERC20 TELOS (TLOS) Got Listed on MXC - The largest Exchanger in Singapore. This listing is still a part of the feasible strategy in creating more utility to the ERC20 TLOS Token.

After the launching, the price pumped automatically. Without any Initial Exchange Offering, the token have always been and still heavily traded with $1.2 Million 24-hour Trading Volume each day since it started. These milestones were shared and announced to all Social Media handles of Telos.

After the surprisingly welcoming AMA in the English Channel of MXC, the volume started to pump to a Million Dollars before the end of the day. Check the AMA Transcript here.

There is an ongoing trading competition too that would most be likely increase the number of investors which will both benefit the platform and the Token's value.

We have also proliferated the use of the Tag #RealWorldCrypto. 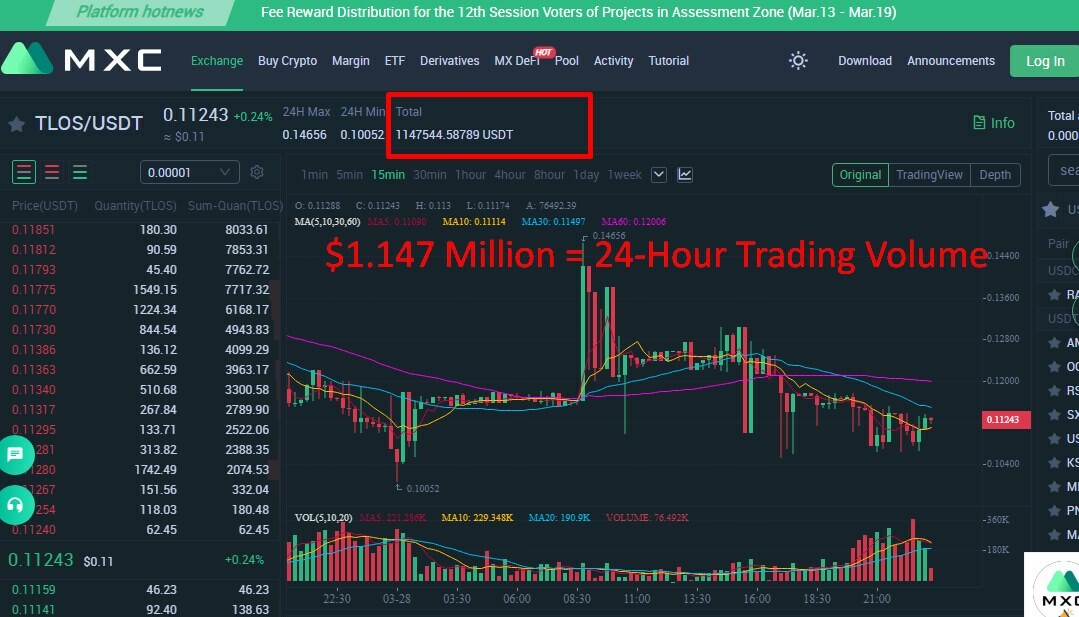 To start Trading ERC20 TLOS to USDT, vice versa and join the Trading competition, you may consider signing up under my link.

These are the Top Milestones achieved this March 2021 alone.

Now, here are the other amazing things that we have also reached this month. This portion also shared the upcoming updates of the projects. 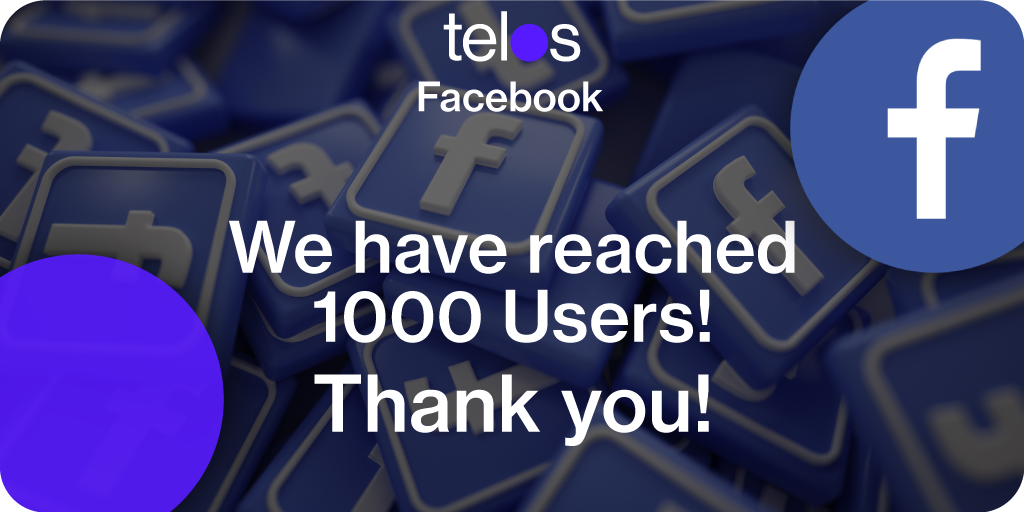 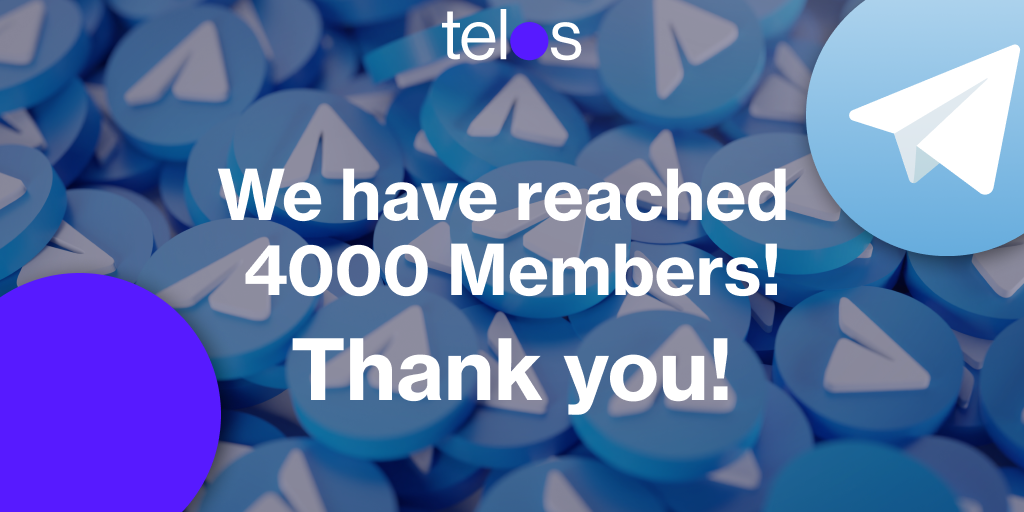 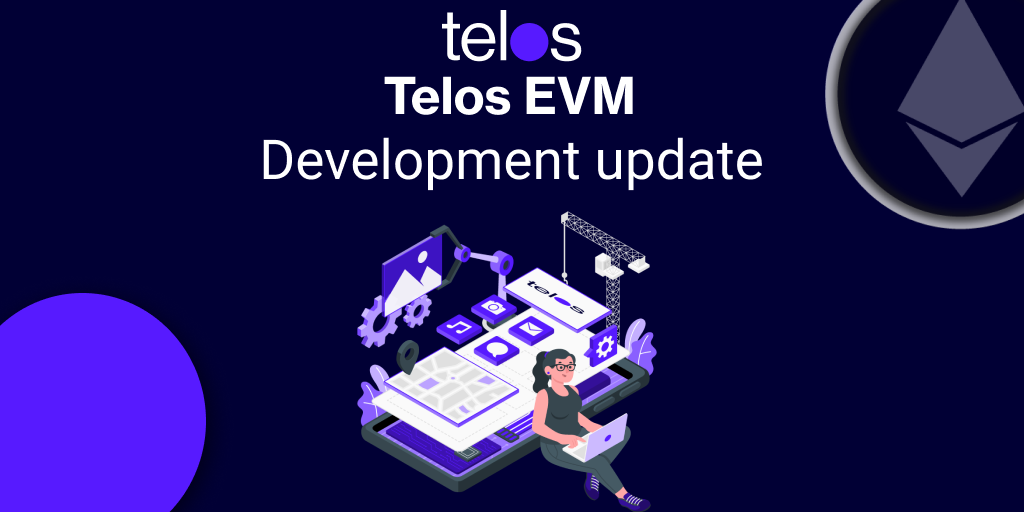 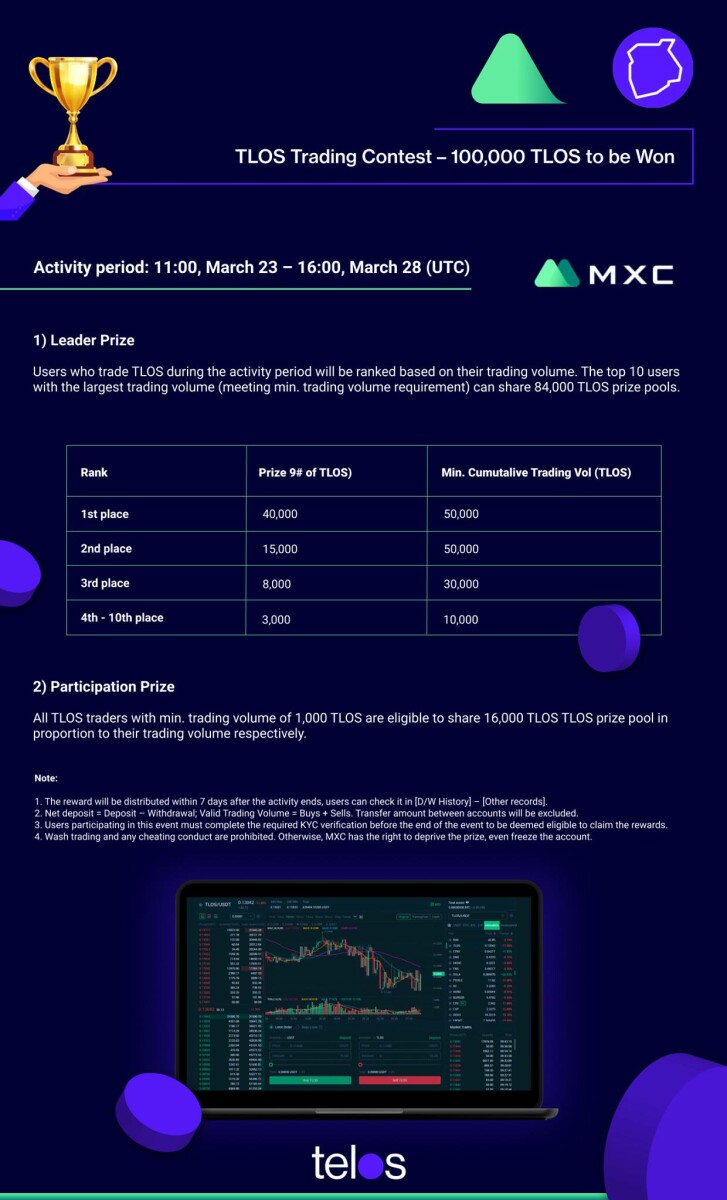 The Telos Trading Contest in MXC.

For the existing community members of the Telos Network,

When somebody asks you, "What is Telos?" wherein you already have an existing account and been using, earning and trading it, Here is what we can say or show.  Telos is a blockchain - the fastest and most powerful in the world. Why? Because the network can provide 10,000 transactions per second speed. Scalable and decentralized. It has two utility tokens. The Native Telos (TLOS) and the ERC20 Token (TLOS) which is running in the ETH Blockchain to be soon a bridge and act as an EVM a few months from now. 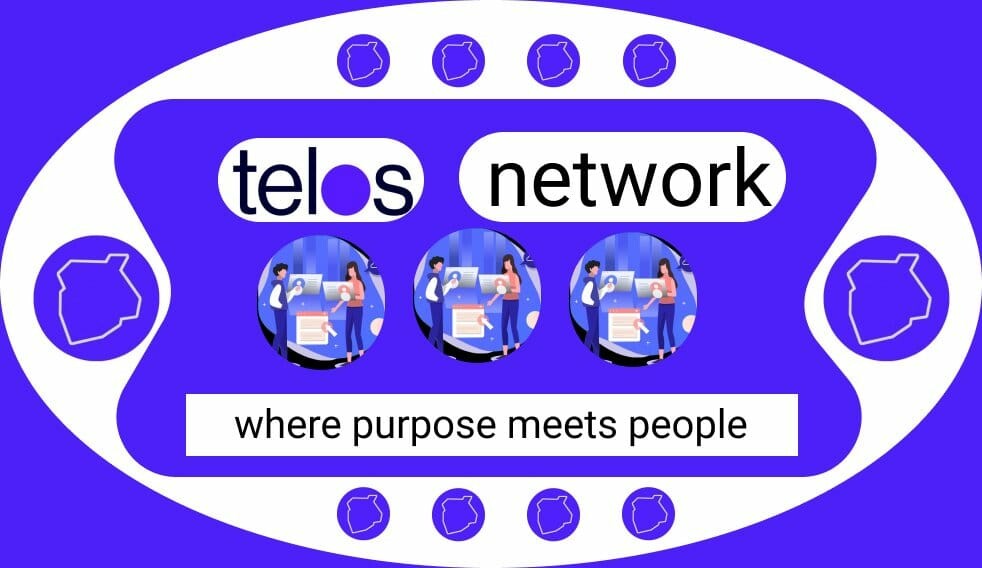 **Thanks to Emmanuel Patrick for this infographic. 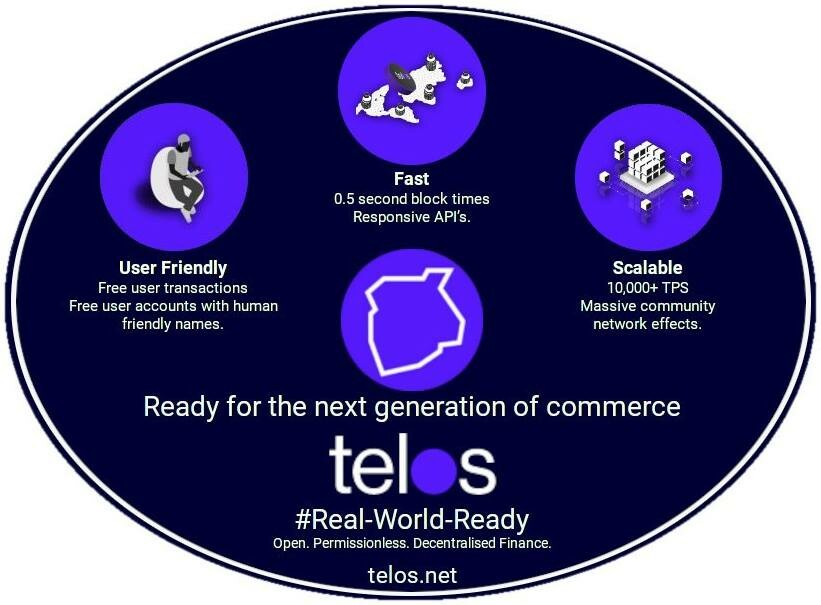 **Thank you to our beloved Stelios and Angus for the spectacular infographics.

If you still don't have a Telos Account, it's always never too late to create one: https://telos.net/create-account/

Note: Please remember to always save your keys.

Current Announcements of the Telos Network and Telos Foundation:

My latest Blogs about a Telos Main Projects