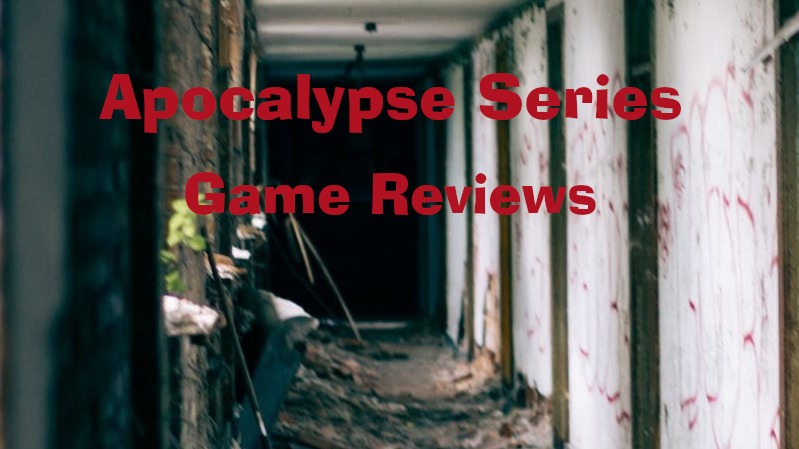 With the current COVID-19 pandemic occurring at the time of this writing, it seemed appropriate to take a look at some games that prominently feature the end of the world as we know it, or at least the post-apocalyptic landscape of the time after. In this installment, we’ll be looking at Dead Age, a strategy, role-playing game developed by Silent Dreams and published by Headup in 2016.

The apocalypse this week is, once again, zombies! A mysterious virus has spread, bringing the dead back to life to attack the living -- a fairly standard zombie backstory. You take on the role of generic white male protagonist, named Jack by default. You can choose a different name when the game starts, but this game has a set story with you playing a particular character.

As the game begins, you awaken after a car accident, but before being eaten by the zombies on the highway. After fighting off a single zombie, you are rescued from a larger group of them by a sheriff, whose only name in the game seems to The Sheriff. He takes you to a nearby group of survivors and, in short order, you join their group.

You can skip the introduction/tutorial when starting the game. This is useful if you do multiple runs through the game to get the different endings.

In some ways, Dead Age plays like an older console role-playing game. The combat system is your party of 1-3 survivors against a group of zombies. Each character gets a turn to take an action, either attacking or using a skill. Your survivors accrue an action point, or AP, each turn, and some combat abilities require that you to spend some AP to activate them.

Winning in combat rewards your survivors with experience, which will eventually increase their level. Each time a survivor gains a level, they get skill points which can be spent to improve their skills. You may also find new equipment, crafting components, or resources, such as food.

The cost to upgrade a skill increases as you progress spending skill points on it. At the dark green boxes, you unlock a new ability that can be used in combat.

There are combat skills, which directly improve your abilities at fighting zombies, and job skills, which increase your ability to craft new items or gather resources outside of combat. Putting points into any skill will increase some underlying statistic for that survivor.

There are five basic stats: Constitution, which determines a survivors health; Strength, which improves melee combat damage; Reflexes, which impacts blocking incoming attacks and when a survivor goes in combat; Perception, which increases damage with ranged weapons; and Intelligence, which increases damage from Engineering skill abilities. There are then further stats derived from the combination of these primary stats and any equipment your survivor has acquired, i.e. their actual damage with ranged or melee weapons.

Bill in his stylish toboggan and blood-stained undershirt.

From your base of operations you can either shop, exchanging Materials for items; assign survivors to a job for the day, either crafting, hunting for food, or guarding the base; or send a party out to explore one of five surrounding areas. Survivors assigned to a job cannot be taken out to explore and fight zombies. Your base can also be attacked, particularly later on in the game, which is why you may want to assign guards.

Early on, you only have a few survivors, but as the game progresses you should find a few others that can join your group. Bill, pictured above, is your second survivor and gives you your first quest, to search the highway for cars containing food. Completing quests reward your survivors with experience and may also provide additional items or advance the plot.

This is the overview of your survivor camp. In the Cantina, you can occasionally talk to another survivor, typically to get details on a quest.

I don't want to get too much into the plot to avoid any spoilers, so let's move onto the game itself. The graphics are decent considering this is a smaller developer. The combat animations are not too realistic, as survivors often seem to fly through the air to land a melee blow. The combat backgrounds are fairly well done, helping to give a sense of there being more zombies than the handful you are fighting at a time, and I liked the artwork for the loading screens.

The sound effects are a bit reminiscent of an older console or arcade game. There are a lot of thwacks and grunts as people are hit. There are various sound tracks for the different areas, which I appreciate, though you will hear them a lot while playing through the game. There are no voice overs to speak of, just scrolling text with a sound effect as it displays.

The game does have a lot of repetition; as with a lot of role-playing games there is essentially the same type of fights over and over. You take a group of survivors out and grind through zombies, occasionally having a random events come up in-between fights. Usually you are trying to find a specific item, to get far enough in a particular stage to complete a quest, or just trying to level up and get more resources.

These are the five areas where your survivors can go to fight zombies. Granted, two of them are the same area with alternative times of day.

The game was not originally written in English and that comes through in the dialog. It's not so bad that you can't understand what is going on in the game, but sometimes the way things are phrased makes it stand out that this was clearly a translation of the text. On the bright side, the game does let you make some choices that impact the outcome of the plot.

As mentioned previously, the game also has multiple outcomes and is intended to be replayed. You earn medals for completing certain challenges, like kill 3 of a particular type of zombie, which can be spent to improve Jack's starting stats in future games. You can eventually also unlock new professions, giving him a slightly different look and starting abilities. However, if you got sick of the combat in one play through, you may not relish doing it over again.

Overall, if you are a big fan of zombie games or enjoy grinding combat, this title may be for you. Personally, I give it a "C+/B-", or a 6.5/10 stars. Worth picking up if it's on sale (and it is often deeply discounted), but probably not at full price.

If you want to check out Dead Age it is available on Steam here.