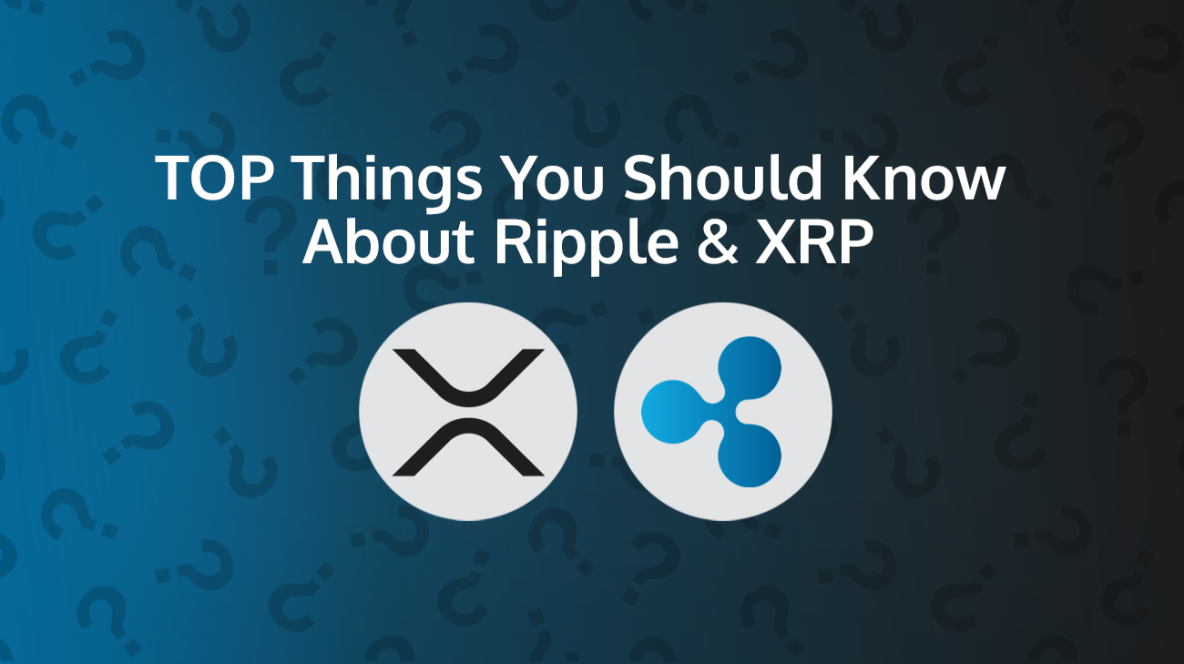 Hey guys :) I’m back with another full-featured piece on everything you need to know about X cryptocurrency. This time I answer all of the need to know questions about Ripple’s XRP digital currency.

If you haven’t already checked out some of my previous FAQ articles on Enjin Coin, Lisk, Chainlink, and others, be sure to read those too!

Ripple is the enterprise blockchain company behind the XRP cryptocurrency and real-time gross settlement system, currency exchange and remittance network. It is a US-based financial technology (fintech) company attempting to disrupt and replace current global payments infrastructure such as SWIFT.

Ripple believes that the world’s current global payments infrastructure is too costly, unreliable, and slow due to its fragmented and complex underlying payment systems.

Therefore, Ripple’s goal is to make global payments easy by using blockchain technology and digital assets to enable financial institutions, businesses, and individuals alike, to send money across borders, instantly, reliably and for fractions of a penny.

Ripple hopes to accomplish this goal by building new global payments products, getting real customers to use these products, and by working with regulators, governments, and central banks to improve the way the world moves money.

That being said, Ripple is seen as a viable contender in the global payments industry and currently employs more than 350 people, has a global presence with 9 global offices, and has 450+ customers.

2. What’s the difference between Ripple and XRP?

Ripple is a privately-owned fintech company that provides efficient solutions for sending money globally, while XRP is an independent digital asset native to the XRP Ledger.

A common misconception is that Ripple and XRP are the same thing, however, this is not the case. To help clarify how Ripple and XRP are distinctly different from one another, I’ve answered these frequently asked questions about them:

What does it do?
Ripple provides global payment solutions designed to make it quicker, easier and cheaper to send money globally.

How is one related to each other?
Ripple, as a fintech company, uses the XRP digital currency and the XRP Ledger in its global payments product, xRapid. Ripple does not own or control the XRP digital asset or the technology behind it. However, Ripple did own 60 billion XRP and has been periodically selling and distributing XRP digital assets.

The XRP digital asset can be owned “held” by any individual, business, or entity, including you, me, or Ripple. The XRP Ledger on the other hand, cannot be owned by any single entity – it exists independently of any one person or business.

Who controls whether it succeeds or fails?
Ripple is controlled by its board, founders, and employees who manage how the Ripple company operates.

XRP’s success or failure is determined by the community that uses the technology and contributes to XRP or the XRP Ledger.

Who uses it?
Ripple’s financial products are used by financial institutions such as banks and payment providers.

XRP can be used by anyone and anyone can build on the XRP Ledger.

Who owns it?
Ripple is owned by the founders, investors, and employees that own stock in the company.

XRP can be owned by anyone.

3. Who and When created Ripple? 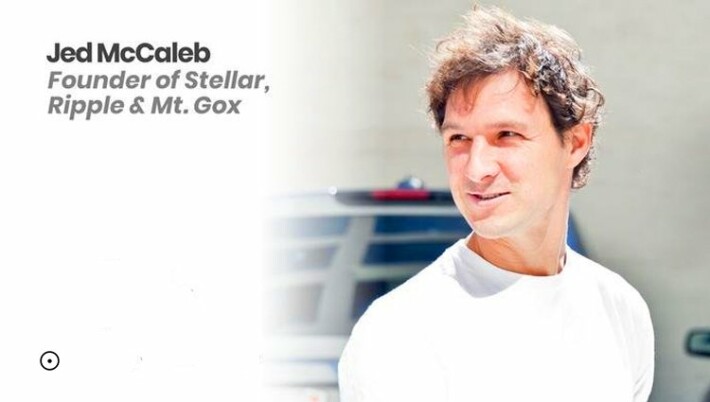 Early on in Ripple’s development, Jed recruited David Schwartz and Arthur Britto to build out the Ripple protocol and to help fund development he secured investment from Jesse Powell.

Jed recruited Chris Larsen to be CEO of OpenCoin, while Jed himself continued to develop the Ripple protocol and secure investments. That was until July 2013, when McCaleb left his active role in the company.

RippleNet, as described by Ripple, is “the world’s most accessible global payments network.”

It is a network-based on Ripple’s products developed for banks and financial institutions. RippleNet makes it easy for its diverse network of financial participants to enable faster, lower-cost payments around the world.

To date, (February 2020), Ripple’s global payments network – RippleNet – has been utilized by over 300 customers across 40+ countries and six continents. These customers benefit from the following benefits offered by RippleNet:

Global - Financial institutions can expand their reach by offering more places and ways to move money.

Reliable - Financial institutions can build trust by increasing visibility through transparency and by eliminating payment failure.

Instant - Financial institutions can provide their customers with instant payments so it will arrive when they need it.

Low Cost - Financial institutions benefit from significantly reduced operational costs which they can capitalize on to further grow their business.

Currency Independence - The XRP token used in RippleNet’s xRapid product can be exchanged for any currency imaginable, making RippleNet ideal for cross-border transactions.

Ripple offers its partners access to RippleNet – which is a global payments network that enables financial institutions to facilitate faster, lower-cost payments around the world.

RippleNet is composed of three Ripple products called xCurrent, xRapid and xVia, which were previously offered individually until September 2019. Now, each of these Ripple products appears to be inclusive to RippleNet and is designed to solve the problems experienced in existing global payment systems.

See a brief overview of these products below:

xCurrent
This payment product offers banks a system to process global transactions and transaction details between other banks and financial institutions within seconds in real-time. Successful transactions are recorded in a rulebook that maps the operational consistency of each individual transaction.

xRapid
This payment product utilizes the XRP token as a bridge currency and source for liquidity in cross-border payments with currency exchange. The xRapid payment product saves financial institutions considerable costs and speeds up transactions.

xVia
This payment product is kind of similar to PayPal in that it provides an interface through which customers can initiate international transactions. The system leverages a bank or payment provider that supports RippleNet to serve as an intermediary for the transaction.

All three payment products in RippleNet are significantly faster and cheaper than comparable payment networks.

Xpring is an open platform that builds on open source core technologies that allow for sending and receiving real-time payments in any currency. The open Xpring platform provides developers with tools, services, and programs that make it easier for them to integrate XRP-powered payments into new applications.

XRP Ledger (XRPL)
Xpring leverages the XRP digital currency and its ledger so that developers can build products that benefit from XRP’s fast and cheap transfer of value.

Interledger (ILP)
The ILP is a standardized open protocol that simplifies payments in any currency and enables XRP to be used as a bridge currency for real-time payments.

Web Monetization
An open standard that presents a new business model by allowing content creators to easily charge for the consumption of their work through micropayments.

Tools
Developers gain access to APIs, SDKs, docs, sample code, and demos to make it easier to integrate the aforementioned core technologies into their applications.

Services
Developers are provided with data, test and development networks, and ledger explorers to easily access the networks that Xpring’s core technologies operate on.

Programs
Developers can join programs that help them with advocacy and outreach, support, investment, and partnership opportunities.

The Xpring platform primary use cases:

All in all, the Xpring platform provides XRP community members and developers with the ability to tap into the power of XRP to build similar payment solutions to those that are offered in RippleNet.

6. Does ripple use Blockchain technology?

No, Ripple does not use blockchain technology. Instead, Ripple uses a distributed consensus ledger using a network of validating servers and the XRP digital currency.

Ripple and XRP naysayers call Ripple’s distributed ledger technology “nothing but a glorified spreadsheet”, while XRP supporters view it as far superior to blockchain technology.

The XRP Ledger is a peer-to-peer (P2P) network that provides a worldwide, shared ledger that gives applications authoritative information about the state of its contents. Such information includes: 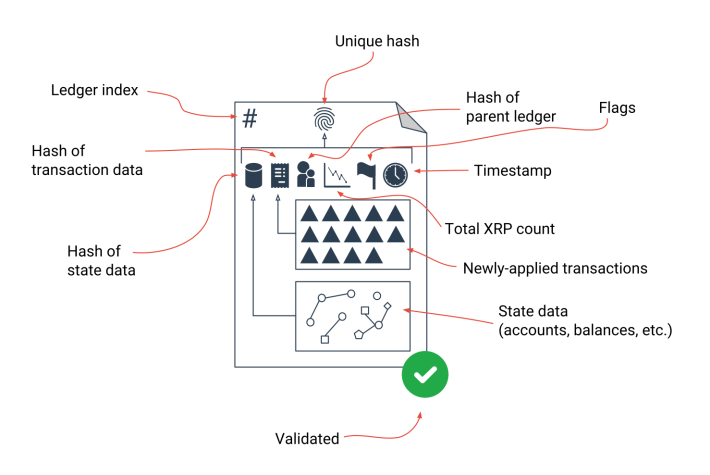 Moreover, the XRP Ledger is constantly updated with a new version of the ledger every several seconds which is validated when XRP servers:

8. What is XRP and what are its features?

XRP is a digital asset built for global payments as it offers financial institutions such as banks and payment providers with a fast and low-cost option for sourcing liquidity in cross-border payments.

XRP’s distributed ledger technology can also be leveraged in use cases for micropayments, e-commerce, exchanges, and peer-to-peer services. The XRP cryptocurrency and XRP Ledger are open source technology in which anyone can use and build upon.

Scalable
XRP can consistently handle 1,500 transactions per second, 24 hrs a day, 7 days a week with no downtime. XRP can also scale to handle the same transaction throughput as Visa (65,000+ TPS).

Distributed
XRP is an open-source technology that is run by a growing set of validators located around the world, and it’s distributed XRP Ledger is built on the principles of decentralized blockchain technology.

Stable
XRP has a seven-year track record of stable technology and governance which makes it a viable candidate for institutional and enterprise use. The XRP network’s growing number of ledgers have all closed without issue since its inception in 2012. 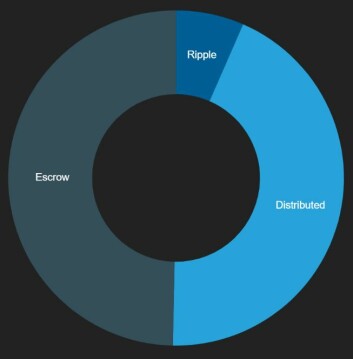 As of February 2020, XRP is not classified as a security and according to Ripple and its CEO Brad Garlinghouse, XRP is decisively not a security.

For an asset to be declared a security, it must pass the Howey Test which is composed of three elements being:

An asset must answer yes to all of the above questions to be deemed a security and XRP answers yes to only the first question.

Other reasons why XRP may not be classified as a security include:

All in all, it is still up for debate as to whether XRP should be classified as a security and it is up to the US Securities and Exchange Commission (SEC) and the US District Court to decide.

10. How does Ripple make money?

Ripple has become one of the most valuable private companies in Silicon Valley and the vast majority of its wealth has come from selling XRP tokens.

When XRP was first created in 2012, a total supply of 100 billion XRP tokens was issued into existence. Out of this total supply, 20 percent (20 billion XRP) was retained by XRP’s founders – Jed McCaleb, Chris Larssen, Arthur Britto, and David Schwartz – who were also the founders of OneCoin, now known as “Ripple”.

As for the remaining 80 percent (80 billion XRP) tokens, they were gifted to OneCoin (Ripple) from XRP’s founders. Ripple gave many of these XRP tokens away in giveaways (airdrops) to Bitcoin holders and users on Bitcointalk forums.

Also, the Ripple company put 55 billion XRP in a cryptographically-secured escrow account which allows them to sell a maximum of 1 billion XRP tokens in a quarter. Therefore, Ripple sells some of their XRP holdings each month and issues transparent reports on how much they sold.

As of February 2020, Ripple has sold a total of 5.3 billion XRP tokens which have accounted for the vast majority of Ripple’s income.

11. How many partnerships does Ripple have?

Ripple has partnered with more than 300+ banks and financial institutions from around the world. A breakdown of Ripple’s list of partners is as follows: 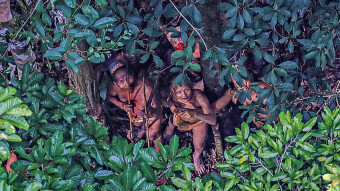