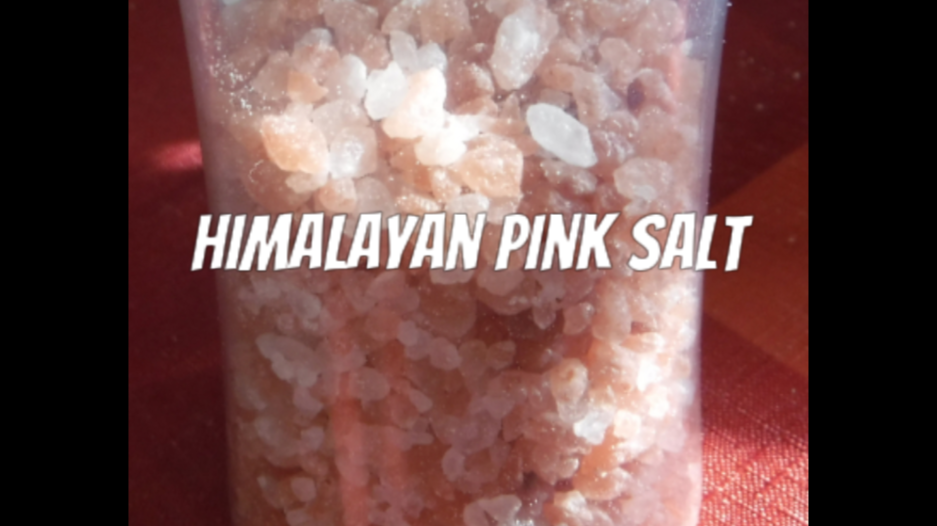 I discovered Himalayan salt about 4 years ago, after watching a video online and I've used nothing but pink salt ever since whenever I'm cooking or baking. It brings out amazing flavor while at the same time, rejuvenates my foods with several dozens of trace minerals our bodies need to stay healthy and vibrant, while regular table salt has almost none.

The story behind Himalayan salt is fascinating in itself. Some 300 million years ago, in the region of what is now the Himalayan Mountains, there once existed a vast mineral rich ocean, including iron which is what gives it its pinkish / reddish look today. As the ocean dried and the mountains formed over, the intense pressure helped form the rich salt rock deposits of northern Pakistan. They are regarded as the purest salts in the world as the mountains shielded the salt deposits from any outside pollutants over these hundreds of millions of years. Pink salt is prized around the world.

The salts can vary a bit from reddish, to pinkish, orange and white since the mineral content will vary but all are prized for their medicinal benefits and flavors. The Khewra Salt Mine, the largest source of Himalayan Salt, is located in Khewra, Punjab region in Pakistan. It is the oldest mine in Pakistan and a major tourist attraction. A quarter million people visit the mine every year. In fact, salt is one Pakistan's biggest exports. 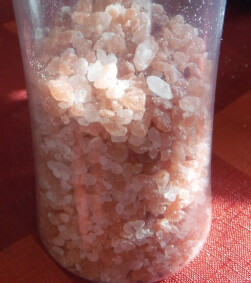 They can also come in many shapes and sizes. You've probably seen a salt lamp somewhere by now. Maybe you own one? It's usually a big chunk of salt rock but I've seen smaller ones as well. It's believed to be therapeutic in that when you turn on the lamp, the salt also warms up and releases some of its moisture into the air in the form of negative ions. Salt naturally absorbs water and salt lamps soak up ambient moisture in the air.

I also have some large salt tablets I had purchased from Costco's online store. I use these tablets to cook directly onto. I've tried them a few times and it really brings out the flavor in my foods. You'd think the foods would absorb all the salt but that's not the case. I've cooked fish, red meat, asparagus and potatoes and it tasted like just the right amount of salt was absorbed. In fact, it tasted delicious. 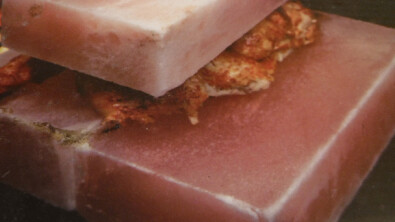 Himalayan pink salt can also come in different grades as shown below. The bottle on the right has coarser grains. The bottle is a mill so it will produce finer grains yet are still larger than the fine grain salt in the salt shaker to the left. I purchased this fine grain salt in 2.72 kg container from Costco for about $10 two years ago and it's still half full. The good news is that salt has an indefinitely shelf life, so long as you keep it in a cool, dry place. 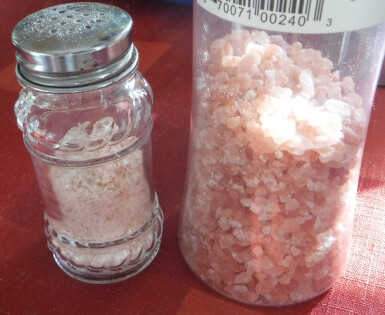 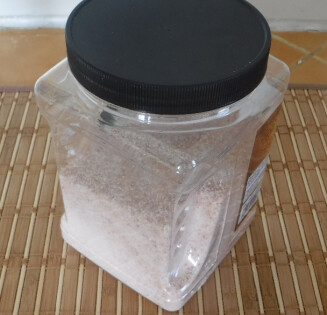 As I mentioned earlier, this salt is infused with dozens of minerals in trace amounts. On the other hand, the regular table salt in the grocery stores is a highly processed form of sodium chloride and most of the natural minerals are removed while anti-coagulants are sprayed onto them to prevent clumping. Manufactured iodine is then added. Pink salt on the other hand has a long list of ingredients, including natural iodine!

Pink salt is believed to balance to the body's PH levels in your blood because of its rich mineral content. A balanced PH level boosts one's immunity and digestion. It has also been shown to improve respiratory issues. Even the Lung Institute says so and contrary to popular beliefs, pink salt does not elevate blood pressure. Even its cellular structure, when compared to other sea salts and table salt, is more stable and consistent.

A spectral analysis of Himalayan pink salt produced 88 different trace minerals, electrolytes and elements. Some of those are magnesium, potassium, calcium, manganese, copper and zinc. Every time i sprinkle a dash on my food, it feels like I'm sprinkling a multi-vitamin. Our foods we get from the supermarket usually come from farms whose soils are chemically depleted. A dash of pink salt could 'rejuvenate' your cooked foods.

Next time, you buy vitamins, check the ingredients. You'll see that silver and gold aren't on the list. These two precious metals (and minerals) are well known as being anti-microbial, anti-fungal, anti-viral 'disinfectants' when consumed in trace amounts, such as when using colloidals. You'll be pleased to know that silver and gold are included in trace amounts within the list of ingredients contained in Himalayan pink salt. 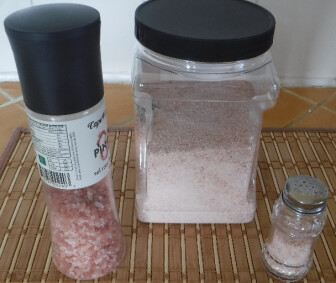 I'm sure most of my readers are aware of trade disruptions. It would be a good idea to purchase a couple of containers of pink salt for long term storage since these salts are mined halfway around the world and might be hard to come by if the trade situation goes further south which I hope it does not!

Of all the salts available, I believe Himalayan pink salt is the best and the safest. It is the most natural and it is the purest salt. Ditch the cheap, unhealthy table salt for beneficial pink salt. Your foods will taste so much better and your taste buds will thank you every time you take a bite. Make the switch today. You won't regret it, I'm sure of it.

Would you prefer highly processed 'fake' table salt with 'fake' flavor or 99% pure salt rich in mineral content and flavors to die for (well, almost). For many years, we were warned that salt was bad for us and was a source of heart attacks. I think we now know why. There's more about pink salt and its benefits in the links I've placed below.

Making your own vanilla is easy but takes patience.

Clicking the links below helps support my blog. Thank you in advance!

Making videos online is easier than ever. Get 20% your first year subscription at WeVideo.

My Mom, bless her heart, was an amazing baker. I often stood by as a child and watched as she prepared all the ingredients for pies, cakes, cookies and more. Her desserts were phenomenal. I'd like to share some of her recipes and my own as well. When the lockdowns came last year, I found myself baking like never before. I've tried apple pie, peach pound cake, strawberry rhubarb pound cake, cranberry muffins and chocolate chip cookies to name a few. I hope you enjoy my recipes.