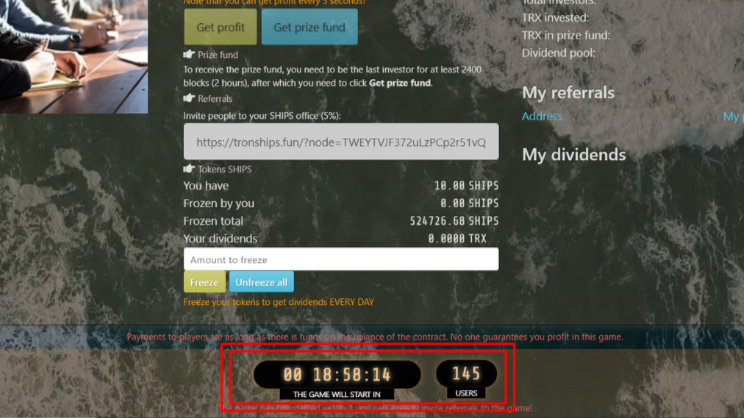 You know I love blockchain games and I've been posting a lot about them. I tend to categorize these games in different categories:

This last category, short term games, is made up of PONZI-like structures. People joining early earn massive amounts while people joining late get the losses.

This sounds really bad, and it is in traditional economies, but blockchain changes it...

Because now you can see how much money is in the pot THE WHOLE TIME simply by browsing the smart contract funds.

This way you can see if there's enough on the pot for you to be profitable or not.

Getting a Method: Here's My Method on Money Making in Ponzi-like Games

So, I'm going to share my money making method with ponzi-like games.

The first part is obvious - if you are going to join these games you must arrive early. Normally it is fine to join after 15-20 days after launch, but I wouldn't advise you joining later than that... better play it safe.

So what I do is I actively scout for upcoming launches of these games - but with a twist.

You see, many of them clone previous versions, so you start to get a notion for how much a game lasts.

For instance, one of my readers suggested a game named TRON Cosmos. This game only has about 300,000 TRON left on the smart-contract, so it's walking towards the end - don't invest in it.

I mention COSMOS because the game - check it here but again don't invest - not only says how many users it has it also states how much was invested and how many days it has been running.

Now, here's how this ties in with my tactic and how I'm spoonfeeding you the next ponzi-like game (yet not launched).

Here's the Upcoming Ponzi-Like Game: Join Early, Get the Worm

So, here's the game I'm going to play next: Tron Ships As you open it up, you can see it is a clone of Tron Cosmos. Not only that, at the time I'm writing this post, the game is still not launched and not a penny was invested. The gates will open in 19 hours.

This is a great opportunity for folks like me who are aware of these launches, as they get in early, dump their huge investment up front, sit back and collect the profits from those that come later on.

I'm giving you the tip to my own gain... yes, you benefit from being alerted earlier on, but in joining through me you become my referral so I end up earning a bit more as well.

So, as I want my readership to have the same success as I do, so they keep on following me with their profits to my next game, let me give you a run-down as to how better play and optimize your chances of success.

How to Play Tron Ships: Tips and Tricks

So, the first thing you must do is decide on how much you want to invest.

Always invest only what you can afford to lose, this isn't foolproof, but on the other hand don't wait to invest your whole amount - do it upfront.

Also, don't reinvest your earnings after your big investment starts paying off - save it for the next game launch.

You should go for the biggest ship you can buy as that is what pays the most dividends.

After you purchase the ship, you'll be granted SHIPS tokens - freeze them for extra dividends on the game.

Now you did what you needed to do and you just have to maintain it... but how?

You basically need to do three things every day or every other day:

1- Collect your earnings;
2- Click "Tron Scan" on the top of the page to see the smart contract, then scroll down and click "Balances" (this enables you to see the tokens in the contract).
3- If the number is rising you can still reinvest, although the risk is still there and I don't advise it. If it is going down then don't invest in any circumstance. Do this thing correctly and your earnings will compound really fast... TRON has been my main money maker in crypto for quite some time now thanks to this little ponzies.

The beauty of it is it is 100% transparent and everyone knows it's a limited time deal, so you don't feel bad as if you were joining an offline cult-like pyramid scheme.

It's an ethical and easy to arrive early ponzi, and I love it.

- Remember these are risky games, don't invest more than you can afford to lose.