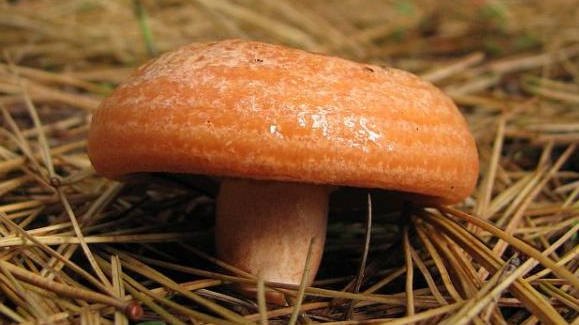 Lactarius deliciosus, commonly known as a cap with saffron and a red pine mushroom, is one of the most well-known members of the great dairy Lactarius in the Rusulales order. It occurs in Europe and was accidentally introduced into other countries under a coniferous tree and can be found on pine plantations. Lactarius deliciosus has an orange carrot cap, which is convex to the shape of a vase, dragged in its youth, with a diameter of 4 to 14 cm, often with darker orange lines in the shape of concentric circles. The cap is sticky and sticky when wet, but is often dry. It has crowded, converging gills and squat orange stems that are often empty, 3 to 8 cm long and 1 to 2 cm thick. Fairly tasty edible mushroom.