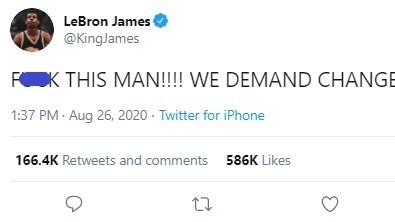 Say Their Names...Vote...Education Reform...I Can't Breathe...Enough...I am a Man. These are some of the phrases that many NBA players have chosen to wear on the back of their jerseys as the NBA season re-started.

But in light of the shooting of Jacob Blake by police officers in Kenosha, Wisconsin, many NBA players feel that their message calling for social justice is falling on deaf ears. Because of this, the Milwaukee Bucks may have started a watershed moment in history when they decided to boycott Game 5 of their series against the Orlando Magic today. This started a cascade of similar actions around the league, resulting in the cancellation of all three of the games that were originally scheduled.

Word in sports world spread quickly, and the MLB's Milwaukee Brewers and Cincinnati Reds in a show of solidarity, have also boycotted their game that was scheduled today.

It remains to be seen whether the NBA season will resume at some point, but personally, my prediction is that no NBA games will be played in the foreseeable future.

Will other professional leagues also follow suit? It's too early to tell, but this is a moment that will be remembered in history, and we are fortunate to be able to witness it.