The Splinterlands weekly battle challenges are one of the little joys of life. You are given a monster, class or ability and you have to share the battle with the community. This week is all about raiding on the storm and use one of the Water Splinter sharks - the Wave Runner! This challenge matched my daily quest, where I had to win 5 battles with the water splinter.

The Wave Runner is a common Melee reward card from the Water Splinter. It costs 5 mana and starts with Reach ability, gaining Knock Out at level 5 and Snare at level 9. One interesting fact about this shark is that he has two set of eyes, one below to see in the sea, and one above to see in the air.

The Wave Runner is a great support card, to use in the second position as off-tank and damage boost. For 5 Mana this shark offers 4 Health Points, 3 Speed and 2 Melee Damage, plus the Reach ability. 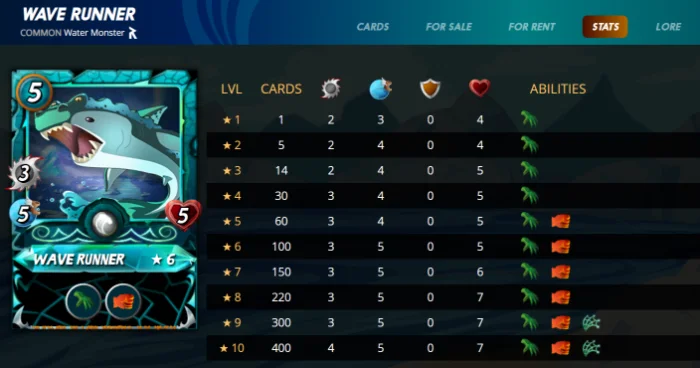 The normal battle rules with 30 mana cap made me select a mix team aiming for high damage and self-healing.

I lost the Chicken and the Water Elemental in Round 2 but the Shieldbearer couldn't dodge the shark bite and was the next monster to fall!

The Wave Runner nuked the Divine Healer and with only ranged monsters left in the opponent team, I cruised towards victory! See the full battle here!

The normal battle rules with 24 mana cap made me select a similar line-up to battle 1 with only one change to boost the overall healing power.

The opponent team was Death Splinter, with -1 Ranged Damage from the summoner. Death monsters doesn't like seafood and targeted the Crustacean King, which managed to heal the Sea Monster once before he was taken down. I had my revenge and nuked the Haunted Spirit

Overpowered damage unleashed once the healing tank fell, and the Wave Runner landed the killing blow that settled the duel. See the full battle here!

The remaining three battles where to similar to the above two, all with normal battle sets and average mana cap. Once my quest was completed, I opened the chest and I was happy to see a new rare card. 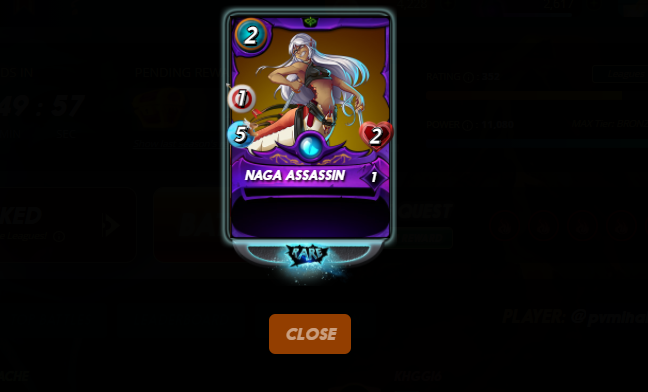 The Wave Runner is one of the cards will always find place in my Water team, either behind the Sea Monster or the Serpent of Eld. It brings the full package for only 5 mana, and you can count on the shark bite to land killing blows. The cheaper alternative for this card profile is "Electric Eels", costing 4 mana.