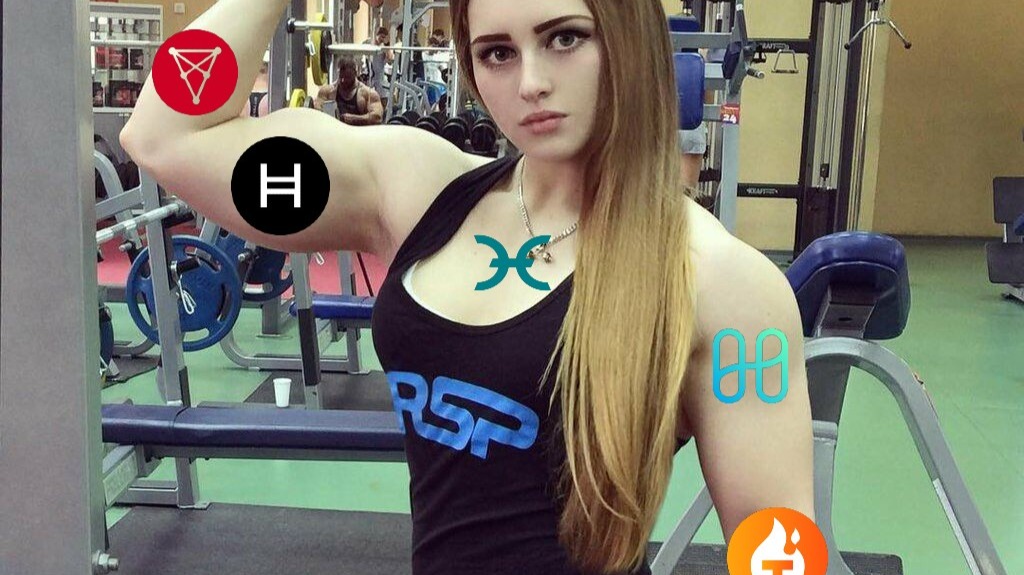 During the week of Feb. 22 -Mar. 1, these five altcoin picks rallied the most were:

CHZ reached an all-time high price of $0.94 on March 10. The rally is completely parabolic and some type of retracement is expected.

Both HOT and HBAR reached new all-time high prices of $0.0095 and $0.455 respectively on March 15. Both altcoins have created long upper wicks since then.

ONE also reached a new all-time high on March 15. However, it is potentially in the process of creating a shooting star candlestick.

TFUEL is trading inside a short-term descending parallel channel which it could break out from in the near future.

In the period of March 2 – March 10, CHZ increased by a massive 1,600%. This led to an all-time high price of $0.94. CHZ has also moved above all-important external Fib retracement levels.

CHZ has been moving downwards since and created successive long upper wicks. In addition, the RSI has been overbought for a full 14 days.

While a parabolic altcoin rally can always continue, it would make sense for CHZ to retrace towards the 0.5-0.618 Fib support levels at $0.38-$0.49. After that, CHZ could create some sort of consolidation structure before deciding on the direction of the trend. 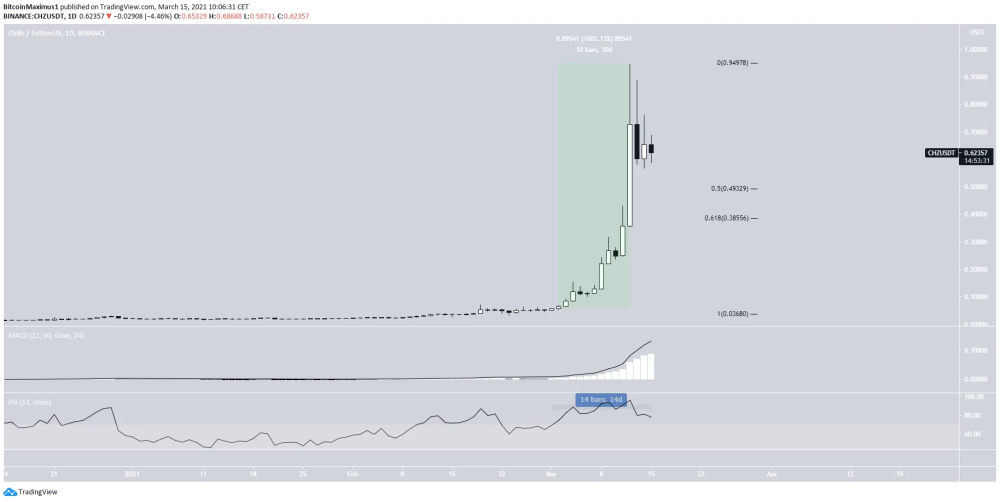 HOT has been increasing rapidly since turning the previous all-time high resistance to support on March 5.

The high was made right at the 3.61 external Fib retracement, a potential reversal area.

While HOT could increase all the way to the 4.61 Fib retracement at $0.011, an eventual correction is expected. 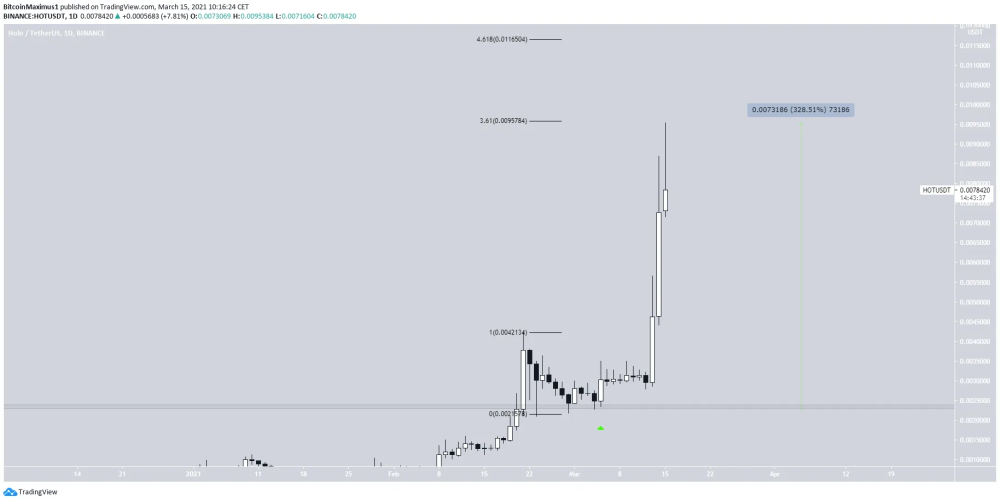 HBAR has been moving upwards since Feb. 23. It has been on an absolute tear over the past two days, at one point increasing by 62%. This led to an all-time high of $0.45 on March 15.

There is no weakness in the MACD or RSI. However, HBAR has already moved above the 4.61 external Fib retracement of the most recent drop. This level often acts as the top during parabolic movements such as these.

If HBAR begins to correct, it could find support near $0.27. 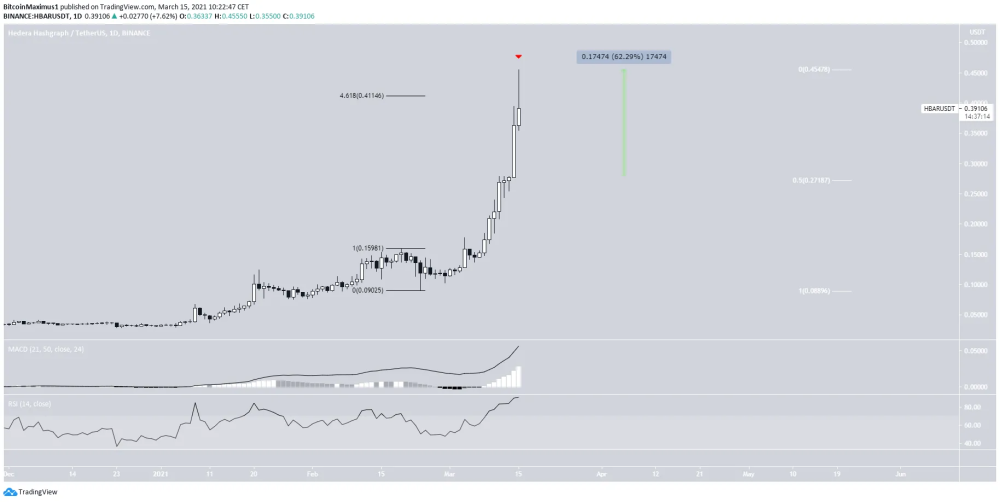 ONE reached a new all-time high price of $0.108 on March 15. However, it has created a very long upper wick and is potentially making a bearish close. This could create a shooting star candlestick — a common bearish reversal sign.

ONE has nearly reached the 4.61 external Fib retracement of the most recent increase. This is also a potential reversal area. 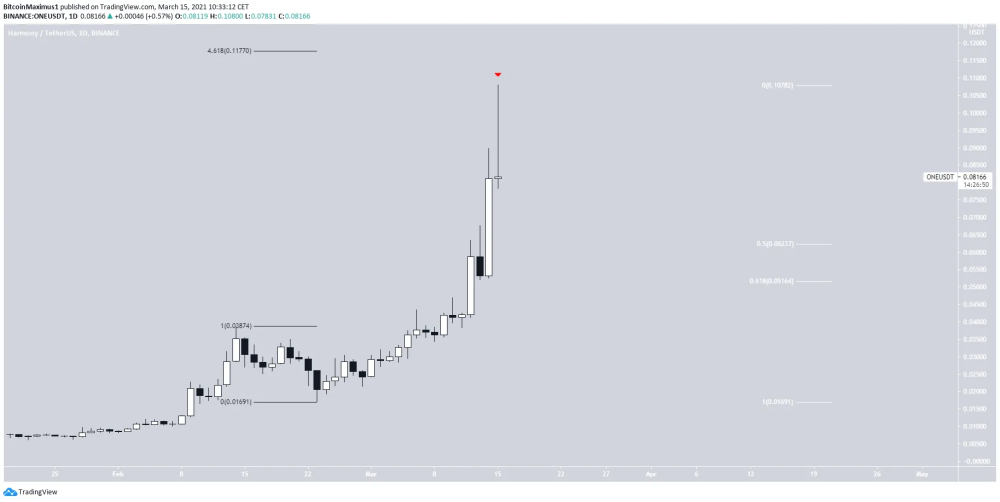 TFUEL has been moving downwards since March 12 after it reached a new all-time high price of $0.459.

However, the decrease looks corrective, as TFUEL is trading inside a parallel descending channel.

Therefore, it’s possible that TFUEL bounces at one of the support levels at $0.32 or $0.27 before breaking out. 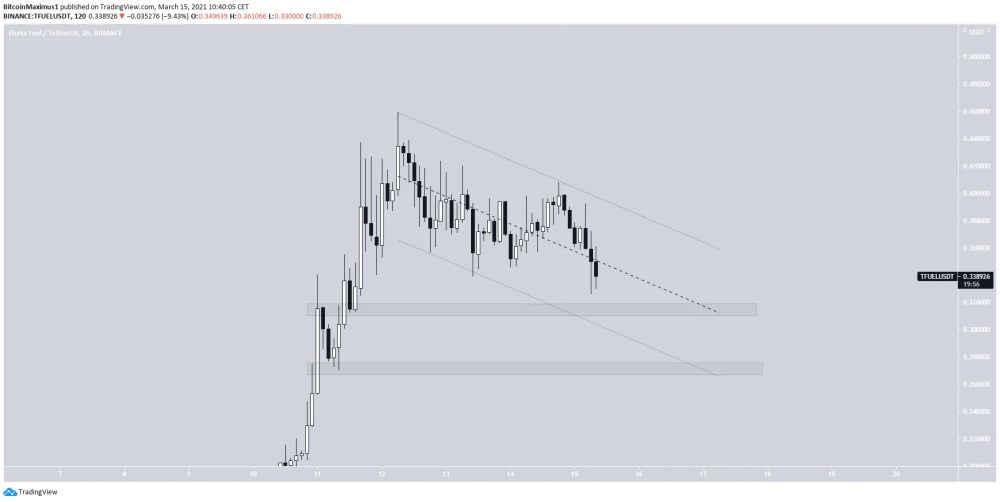