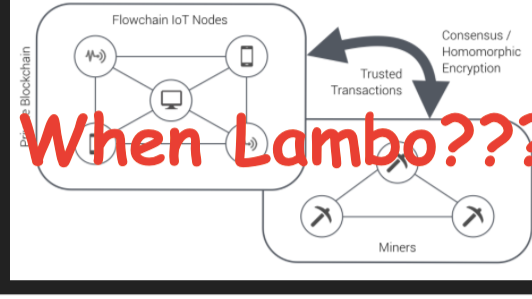 Hey cryptofans, we adore you.  And your kids and friends and parents, too!  Thanks for starting to try to separate church from state from money.

At first glance, DEXToken seemed to be another real head scratcher.   DEXtoken thinking popped up in 2018, and is launching now.   It is another play in the DeFI DEX world.

Zoom out for a moment.  Who else started a DEX in 2018, with only 50K in capital from the ETH foundation?  That's right, Uniswap.  And where is Uniswap right now?  Doing more volume than Coinbase for god's sake.  Zoom out some more. The initial crazed surge in volume moving to DeFI this month faded a bit.  Not only is the field crowded,  but first mover advantage is gone daddy gone now.

OK the DEXtoken has advantages!!!??? Is there a there there? we tried, thought we spotted a few:

* DEX has linkups to other exchanges to invite the arbs in

* DEXtoken has a tweak for a "better" distribution model

* DEXtoken runs off a blockchain that powers IoT stuff, and has cool hardware

* DEXtoken  has some off chain connections & algos

Let's run through these.

First, the IoT usecase - hey we love the Internet of Things, thought it was super cool in the 90's when visiting CMU for a wall street firm. The old Andrew project, not quite as cool as the distributed computing boys at MIT, but cool. And it has progressed - god knows we want to buy DEXtoken RFIDs and stick them on the keys, the wallet, the dog.  And that hardware dongle looks like full on Taiwan electronics supremacy - go thru big chipmaking dog TMSC, we salute ya! god love Taiwan, I have worked with brilliant and great Taiwanese  including opening a 24hr fintech support  center in Taipei.  We were supposed to visit Taiwan Bay one time on the Chinese side but the CCP was busy doing military saber rattling that week.  Frankly, we missed crypto starting up, with a stick up our -ss  in our trad fintech thinking.  The only people we perceive who really tried to wake us up? one lone writer mining bitcoin at Zerohedge, and Taiwanese programming colleagues god bless em. 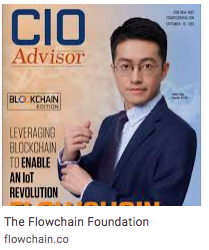 Flowchain looks to be rocking steady. Could be a big pro if this can support DEXtoken long term.   Not clear it makes the blockchain likely to be better for coins?  but undeniably a huge, futuristic play / rock solid use case. 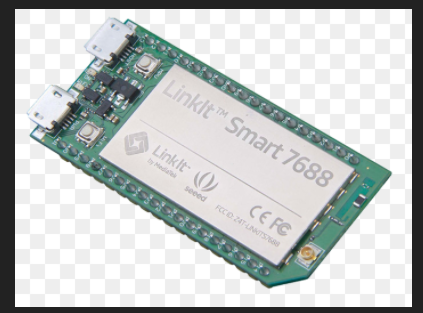 "Unrealized" gains - the way the DeFI sausage is made, we give coin in for staking, then we receive tokens or money back from a share of the commissions.  Meanwhile we lose money if the token goes down.  But we also have (the sleazily misnamed, maybe phasing out description of) unrealized gains / impermanent loss / slippage.  This means when we staked our money, we usually buy 50 50 coin and stablish coin.  But if we bail out, we receive a percentage of the current pool back,  which is not what we put in.  E.g. if one of the tokens moons up, we lose some of it as we get less back, compared to if we had just HODLed instead of staking.   Well, DEXtoken has a tweak where instead of 50-50, the pool is 90% DEXy and 10% stablecoiny.  This should reduce unrealized gains. Possibly a very nice tweak but don't hold the presses.

DEXtoken is building links  to other exchanges to bring the arbs in.  That's nice - We don't see them being a real chain aggregator.  Easy to say, hard to do well.  Compare to Uniswap - ya don't have to build links when you are the biggest source of liquidity in the crypto world. 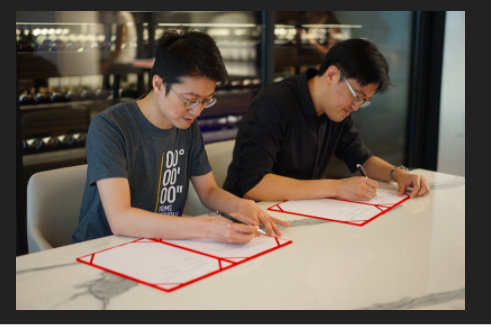 DEXtoken is doing "fair" distribution - well this is nice.   We don't underestimate this issue with the very early adopters - Monero was created as a fork because someone was p-ssed about the predecessor coin's distribution.   But what does this mean to us?  Mostly that early stakers in DEXtoken, were locked in for AN ENTIRE DAMN YEAR WHAT WHAAAAAAT?  Sorry, the illusion of freedom is far too important to us.    And ya know, we don't really care if a small or large group of folks got rich from the ICO, we care about coins that taste good now.  But far more important than our taste is a team of true believers working and investing and using DEXtoken.  Overall, big plus.

Off chain connections?  again maybe we are dumb but do we care? Nah.

The magical pricing formula, sorry, respect, the Speculative Automatic Market Maker (AMM.) After years of working with electronic exchanges, dark pools, crossing pools, third party networks etc, I must say, in classic New Yorkise, who gives a chit.   What can the magic formula do?  Maybe slow down the price rises or drops just a little?  Ok, real markets - read: NYSE - have circuit breakers to slow down under crazy FOMO or FUD.    But an up and coming exchange trying to gain volume?  Does slowing true price discovery help?  Hell no.  Well, maybe the magic formula calculates the number of miners who need new underwear, foresees the future and raises or lowers the price just before the market was about to raise or lower itself ?   Yeah ya wanna get in on the syndication of the brooklyn bridge pal?  Those hours plowing through the whitepaper were wasted.   The formula for exchanges is pretty clear - clearing price discovery, with commissions either flat or throwing a few bips to the sellers / market makers.   We just cannot visualize any added value  (for users)  appearing with unprecedented ( controlled ) price discovery (unless ya have a semi-monopolistic market share.)

Of course, we could be wrong as hell.  Hell, we hope to be wrong and DEXtoken takes over the DeFI DEX market on wings of flame! But honestly, that whitepaper was one obfuscated, pompous bit of writing.   BS trigger warning - "we brought together experts from pricing and computing and cybercoins"  yeah wall street is all about bringing together technology and academia and markets - mmm same old.  R & D always studying dutch timed markets, etc etc.  Obtuse diagrams not really adding value - and just look at the cover photo diagram above- it's another suicide note, drooping down and off to the right.    What's the real magical price? just all buyers and sellers.  Nothing else ever matters.   Compare to Uniswap - an extremely simple pricing algo.

On the other hand, god bless DEXtoken for trying.  It is a weird and terrible market, with wacko volatility.  DEXtoken actually thinks they can calm this down, stop whales from doing the BART and double reverse Barts?  Good on em. but Hey, welcome to the major leagues.  Maybe they can be the game changer here. Still it was ever thus.  The funniest / wisest thought to us, expressed by many top wall street dogs - there are only a very very few big and real clients in the industry, for example Calpers CA teachers pension fund.  And those natural whales don't move that often, but there is a LARGER industry of the top twenty global finance conglomerates and unlimited traders / hedgies etc.    All of those players just sit around doing not much with / for each other, then they try to front run the big whale moves.  And that boys n girls is the real market.

OK, at least DEXtoken is bold enough to name their CTO, which puts us ahead of STATERA.  But, but that just opens doors to jerks like us - are the CTO and "mentor" related?  Are there ANY roundeye Gajin on the team to talk to? ( if not good luck building all those bridges then)  Is the CTO actually listing a current job as "blockchain trainer" on linked in ?  no, no, please dear god hire a real marketing team..  Change that to blockchain speaker now!

BTW, WTF happened to Statera?  Kind of important to think about STATERA.  Why ?  cause DEXtoken has inflationary tokens on their roadmap. We were all checking it out on August 8th, when it was eight cents.  STA touched 30 cents, then dropped back down to.... about eight cents now.  hey, the vaunted Publish0x pump!! Result!!!!  we should have been able to pump n dump for 100%! 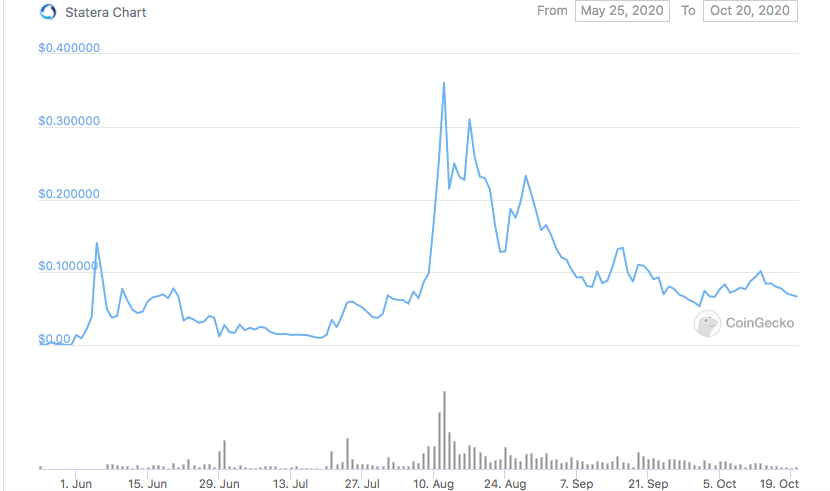 What about the DEXtoken chart?  here's that big first two pumps, since then, crickets....just don't say it looks like AELF coin 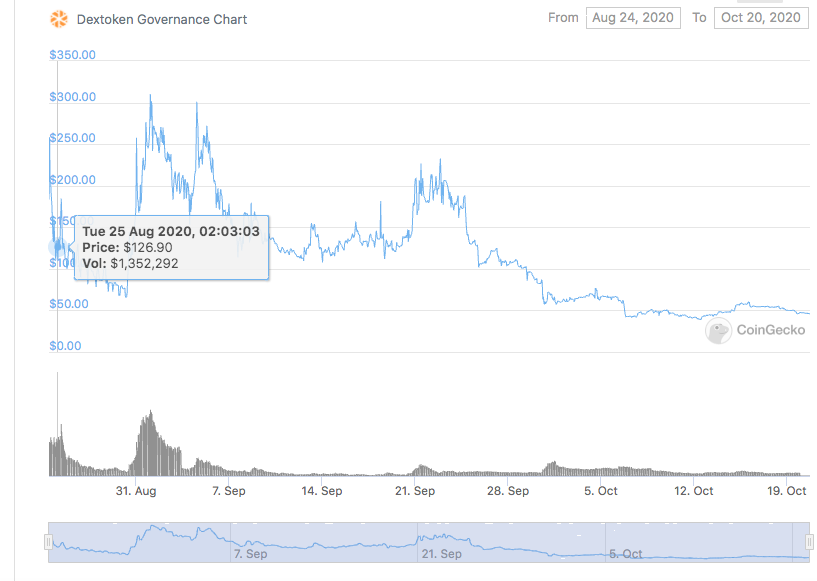 So, zoom out some more.  Uniswap and Coinbase hog most of the market right now.  Next up - Curve with 15% of the defi market.   Yield farming is famed for being silly on wall street - it is called "picking up nickels in front of a steamroller."   A boring, yet steady, yet low paying job, until that one monotonous day you step on your shoelace, trip, and the steamroller smears ya into the tarmac.

Curve has a real monster value prop.  As does Uniswap and Coinbase.  And sort of STATERA.    Let alone the other BSDs in DEX right now.  Coinbase lists a effton of DEX's by volume right now.  Many we have heard of - Unswap, Ox, Curve, but also Sushiswap, Burgerswap, Balancer, the mighty Loopring, hell way down in the 30th-ish place we see Binance and Tron's DEXes, many more cranking away we never thought of.

Total market cap of DEXtoken? only 1MM?   True believers on Reddit?  not thick on the ground... That's a tough, scrappy team working away with honest distribution and incremental improvements, with an independent use case and a world challenging roadmap.   With a groovliy  / strangely named plan of staking / distributions in the pipeline looking tempting.  From a strong technical heritage, trying for a secret sauce price function.  Man, our eyes are misting up.  If the Mighty Ducks star can be a crypto billionaire... if the pricing secret sauce works, and the incremental improvements pile up, and the IoT work pays the bills for serious dev...; (there is still an fton lot of DEXs out there)

but build it and they will come.