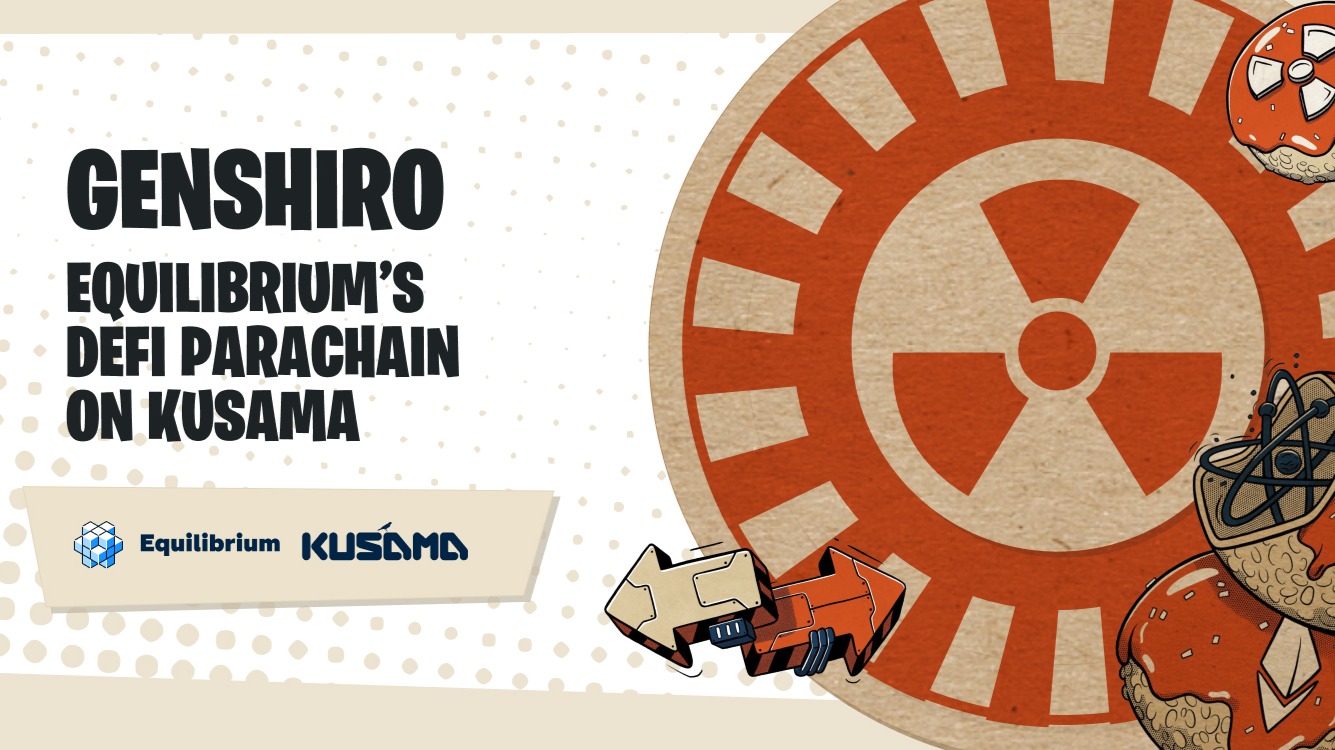 Introducing Genshiro: Equilibrium Has Plans For Kusama As Well As Polkadot

Equilibrium’s ambitions are not strictly limited to Polkadot — we will launch Genshiro, our DeFi parachain on Kusama, and will participate in parachain slot auctions as well.

We’re also concerned about simple replication of Polkadot-based technology on Kusama. Simple ports like that don’t make sense if you want to push boundaries and unlock the full potential of the DeFi market. Equilibrium definitely wants to build something that stands out on its own Kusama-based merits while bringing value to the Kusama network and its community.

For these purposes, our Kusama-based parachain inherits an experimental spirit that’s quite common for the Kusama network. It will be a testing site for our future products before they’re deployed to Polkadot. This means we get to implement some new features for future iterations of Genshiro, like derivatives, perpetual swaps, and futures contracts on gold, ETFs, commodities, and stocks.

With a bolder set of parameters and listed assets Genshiro will be an attractive toolset to those traders who take more risk in their operations.

For experienced Polkadot developers, the difference in making the leap to Kusama is primarily in adjusting system parameters. Genshiro offers a lower minimum collateralization ratio (just 100%) that introduces way more flexibility for leveraging and margin trading.

Genshiro is more generally accessible than our Polkadot’s platform because it will support numerous ERC-20 tokens from day one. Generally speaking we will be less selective in picking assets for our Kusama-based product line rather than for Polkadot, where only low-volatile and popular cryptocurrencies will be added.

Another innovative element here is Genshiro’s governance model. It works by letting users stake GENS (Genshiro’s Kusama-based utility token) to propose and vote on new system parameters. The longer a user’s funds have been staked, the more weight their vote gets on the proposal.

There are 10 GENS tokens for every 1 EQ. So given the EQ initial supply of 120 million, the total GENS supply on Kusama is 1.2 billion tokens. Its use cases include governance, voting for validators, transaction fees, interest rates, and (when GENS will become a more established asset) liquidity for bailouts & collateral.

GENS allocations include a substantial chunk to be distributed among existing EQ holders, bonuses for early participation in a lockdrop, an allocation for the Liquidity farming program to bootstrap initial liquidity on Genshiro. A quarter of the total supply will be distributed via PLO. Look at the pie chart that illustrates these allocations below: 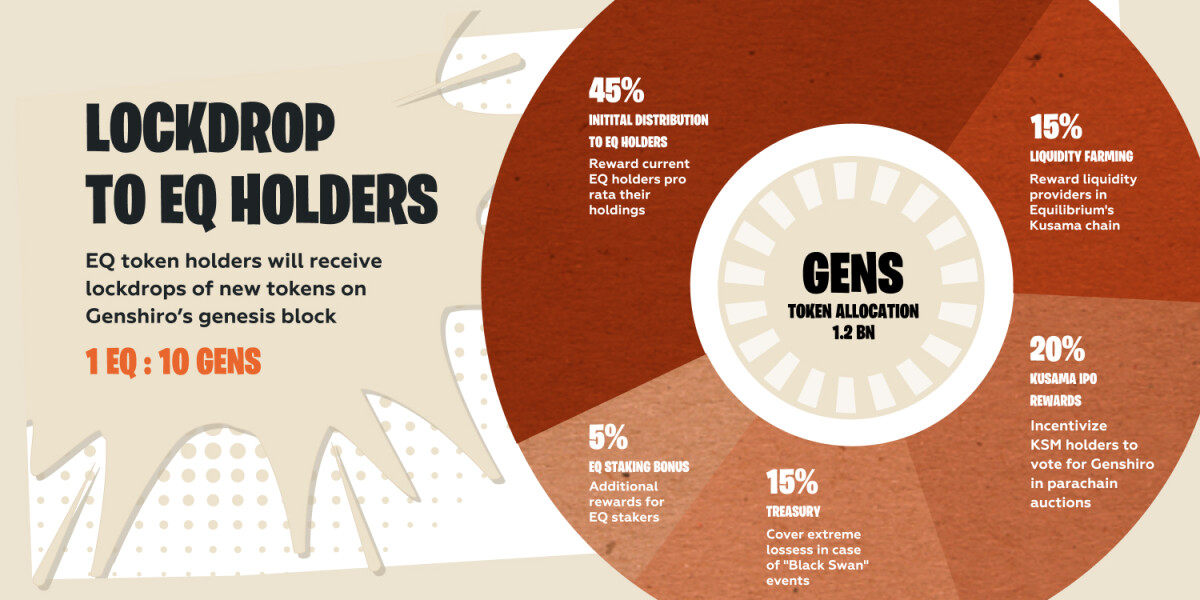 Users with an allocation and vesting in EQ on Polkadot can get ten times the amount of GENS tokens on Kusama. To do so, they will need to stake their unlocked EQ tokens for three months, while GENS will be automatically accounted on locked allocations (that are subject to vesting at the moment of Genshiro’s genesis block). If a user has unlocked tokens, they need to lock them for 3 months to get 10 GENS per 1 unlocked EQ. 10 GENS will be freely available per 1 EQ that’s being vested.

Users participating in our presently ongoing DOT/EQ token swap can profit directly from the Genshiro launch. If they lock EQ that they received through the swap for three months, they’ll get 10 GENS for every EQ they have.

Genshiro will become a DeFi parachain on Kusama

As mentioned, we are going to participate in Kusama’s auctions for a parachain slot. We would like to win at least two six-month leasing periods. We’ll do this without a KSM swap, just a crowdloan. Participants will be able to stake KSM for our parachain slot and receive staking interest in GENS during the parachain lease period. The bonus structure specifically looks like this:

We’re excited to see where we can go with Equilibrium and Genshiro beyond Kusama and Polkadot. All told, our mission is to unlock the full potential of the DeFi market. This calls for a holistic approach that goes beyond embracing just one platform.

Furthermore, we are opening the whitelist registration for our PLO on Kusama. Whitelist participants will get a 1% bonus in GENS on their contributions to the PLO made from blockchain addresses indicated in the whitelist application form. Please note that all whitelist subscribers will also receive referral links that they can share to earn bonuses for other users they recruit for the PLO.