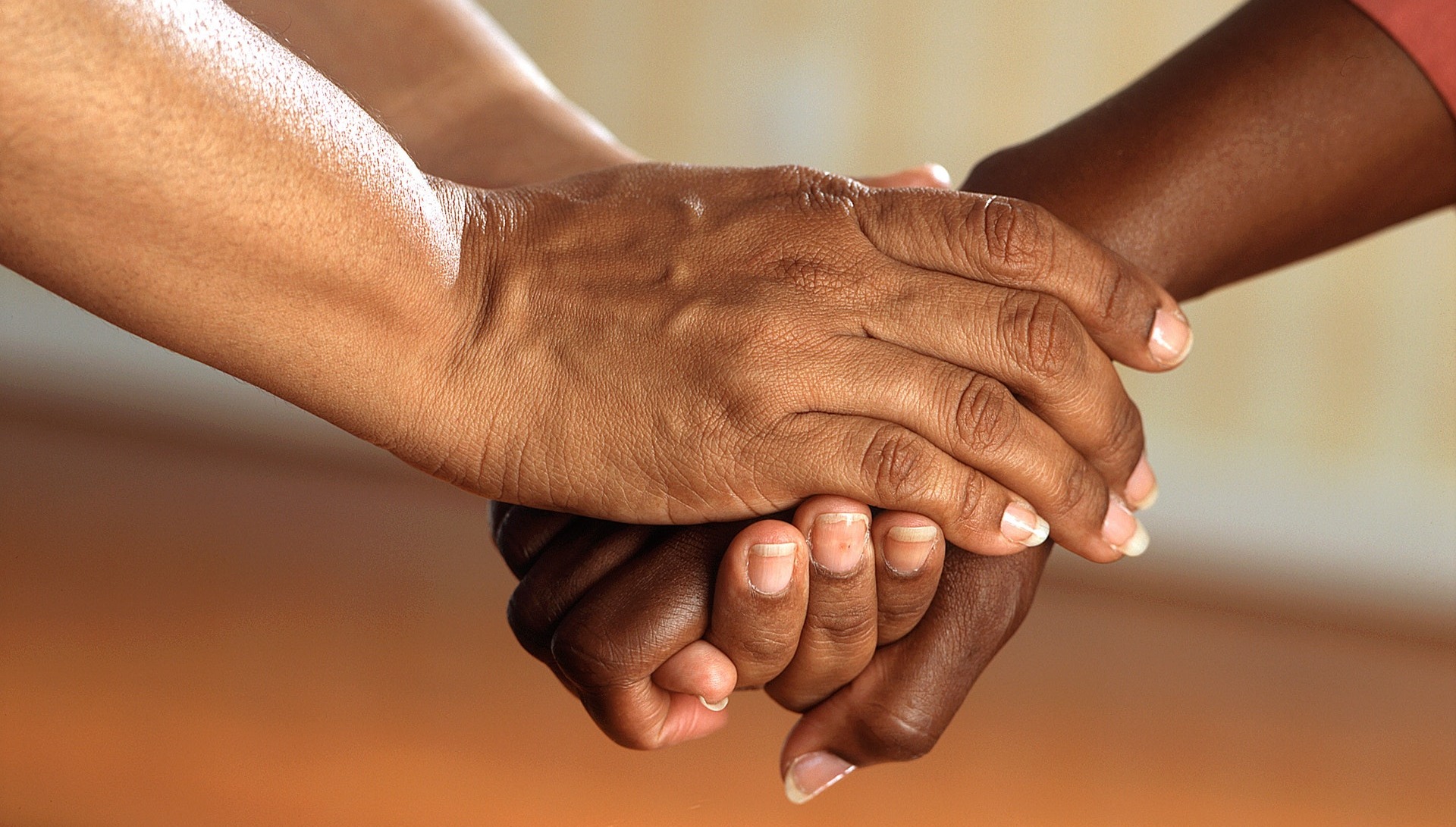 What is Komodo (KMD)? [A Comprehensive Guide to Komodo]

Overhyped is a word you might often hear being associated with blockchain technology, from both inside the space and certainly from media that support incumbent markets and players that stand to be directly threatened by the growth of Distributed Ledger Technologies (DLTs) and cryptocurrencies.

There are many arguments that are posed against crypto - most of which are weak - but there are a few that stand as being somewhat tenable, at least at first. The particular argument being referred to here is that of crypto not being approachable enough for incumbent companies and systems.

This is a reasonable thought. For a while, many blockchain projects did not seem to approach the market with enterprise solutions in mind (with some notable exceptions, like Ethereum), largely focusing on pure P2P products and services that disintermediated processes such that individuals would no longer have to rely on banks or cloud computing companies (and much else) to obtain the corresponding services.

That has changed with some pace, with many projects now building platforms with the explicit intention of bridging the gap between legacy systems and emerging DLT-based systems. Rather than leave pre-existing companies in the dust, these platforms are developing friendly, accessible and seamless solutions that incumbents can adopt to partake the decentralized era.

One such project is the Komodo Platform (KMD), which offers a broad range of solutions for businesses to quickly integrate blockchain technology and customize it according to their requirements. Here we examine the history of the Komodo Platform, the purpose with which it was built, the technology and solutions that support its agenda, the partnerships it has formed and the competition it faces in becoming a successful platform blockchain integration for businesses.

The History of Komodo (KMD)

The idea for Komodo (KMD) platform was first conceptualized in 2014, with the chain being a fork of Zcash that was organized by the SuperNET team - in fact, it’s worth going over Komodo’s interesting inflections from other blockchain projects.

SuperNET’s lead developer, James ‘jl777’ Lee, was building SuperNET on the NXT platform, but when changes came about to the NXT platform, SuperNET’s developers were forced to break away from the platform. They took this setback in their stride, deciding to move away from the use of a single blockchain and turning their attention towards interoperability. As Lee says in a “Declaration of Independence”,

“We the asset holders hereby declare our independence from any single blockchain. An open and jointly developed specification on cross-chain atomic asset transfers will be developed. Any current or future blockchain is invited to join.”

This vision was then sublimated into an idea that would later form the basis for the Komodo Platform. The project’s Initial Coin Offering (ICO) was conducted in 2016, raising just under $2 million - a figure that may seem paltry in the post-2017 age of the ICO, but for the time was a respectable amount. The Komodo team has put together a descriptive timeline of the progress that followed the ICO.

The Komodo team launched the network’s mainnet in January 2017, complete with “complete with independent Smart Chain deployment and delayed Proof of Work security.” They then developed a fully functional atomic swap protocol, allowing the community to test this in a beta program that saw thousands of atomic swaps executed. Following this, the team focused on zero knowledge proofs, a well known technique to obfuscate transaction data to allow for complete privacy.

2018 saw multiple partnerships and programed established, as well as further enhancements to the privacy protocol and smart contracts. Additionally, the team released the beta version of its Agama mobile wallet. Perhaps of greatest interest is the implementation of a feature that allowed smart contracts to work with the Bitcoin protocol. 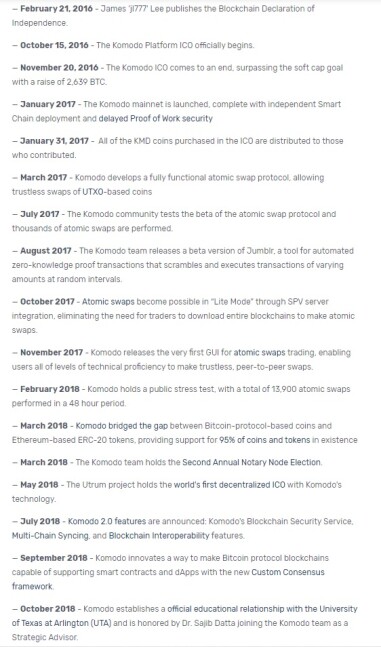 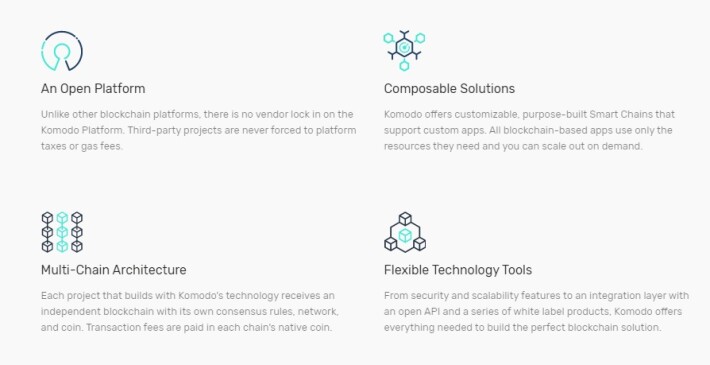 Since then, however, Komodo has shifted its attention to business cases, offering business friendly solutions with a focus on security, scalability, interoperability and adaptability. As an “open, composable Smart Chain platform”, Komodo offers several products that go just beyond smart contract capabilities for businesses. 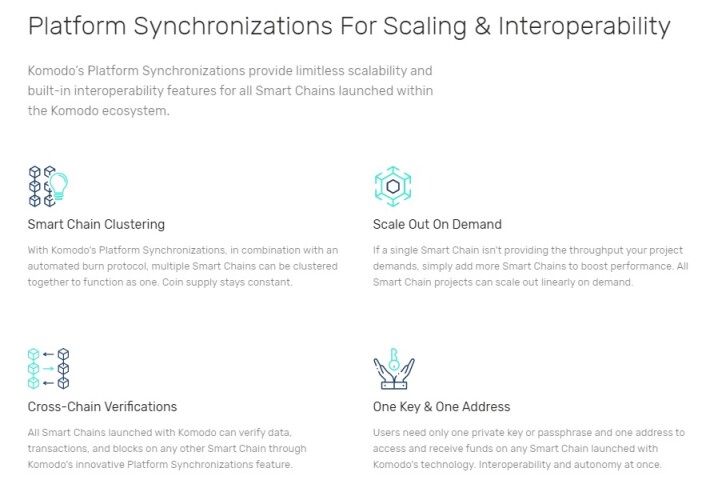 As an end to end blockchain infrastructure platform, this includes the capacity for businesses to easily launch their own blockchains and accompanying ICOs, APIs for easy coding of applications, a library of built-in modules and platform synchronization (cross-chain verification). This comprehensive set of tools allow businesses to build precisely the blockchain and decentralized applications (DApps) that they need.

There are two specific aspects of the Komodo Platform that are worth mentioning: the Antara Framework and the Delayed Proof-of-Work (dPoW) consensus algorithm.

The Antara framework is simply a framework that developers can use to build on top of Komodo. This includes customizable and modular blockchains, choosing from pre built modules or building your own, API integration and general end to end development. The Antara Framework is at the heart of the multi chain architecture.

The dPoW algorithm is a variation of the Proof-of-Work (PoW) algorithm. The team describes it as a “secondary consensus mechanism that recycles the giant hash rate of the Bitcoin network through a series of cross-chain notarizations.” This is simply an additional layer of security and works with both PoW and Proof-of-Stake (PoS).

Essentially, Komodo offers developers a thorough blockchain solution that is customizable and offers cutting edge benefits like interoperability, sophisticated smart contract features and security for businesses.  Komodo’s GitHub page will give some insight into the technical aspects of the platform.

Komodo has formed several partnerships over the course of its existence, neatly archiving them on a single page. For a full list of partnerships, we recommend reading the Komodo Partnerships Archives. 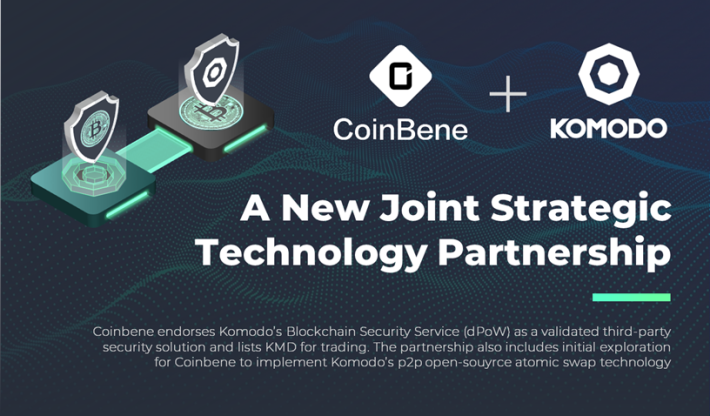 The most significant of these partnerships have to do with cryptocurrency exchanges like CoinBene, Peer2Cash, and CoinSwitch. The latter is particularly notable because it has resulted in a KMD exchange that is dedicated towards Komodo, allowing users to find the lowest rates for the token. The CoinBene partnership is a strategic technology partnership that sees CoinBene use Komodo’s Blockchain Security Service, as well exploring the use of CoinBene’s atomic swap technology.

It has also partnered with cryptocurrency ATM operator CoinFlip, allowing users to purchase Komodo tokens at its network of ATMs. 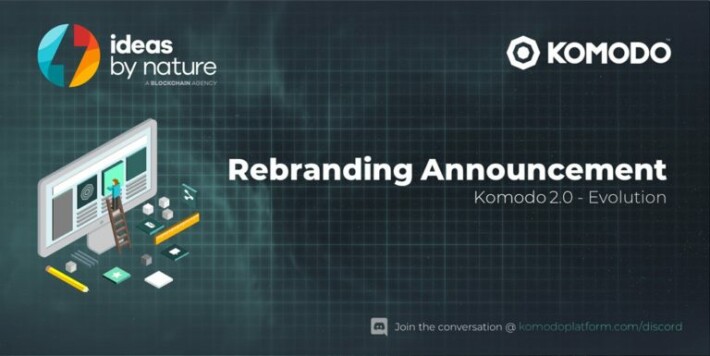 Lastly, it has partnered with Beijing-based Venture Capital fund ValueNet Capital, with the strategic partnership focused on decentralized Initial Coin Offerings (dICOs). As Komodo is focused on businesses, this particular partnership will help businesses launch their blockchains with tokens.

Competitors: Forget Scaling, Interoperability is What Many Focus on Now

The Komodo Platform’s specific target area is interoperability, which is a much discussed pain point in the industry, and one that several projects are tackling. Not the least of these is Parity and the Polkadot project, which has a large following and a tremendous amount of support. Other projects working on interoperability are Cosmos (ATOM), Aion (AION), Ark (ARK), ICON (ICX) and Wanchain (WAN).

Indeed, each of these is taking its approach to solving the interoperability problem, and nearly all are showing great promise in solving the problem.

Besides scaling, interoperability is considered to be the other major problem in the blockchain space, the resolution of which would mean greater efficiency and utility within the space. It would make for more seamless operations between industries and platforms, and well and truly break down barriers between individuals, companies, industries and nations. With interoperability, there is no artificial barrier between tokens.

Having said that, what does it mean for projects in this niche to compete with each other? After all, they are all working towards the greater utopian good of getting different blockchains to work with each other, and any project that succeeds in this regard benefits other projects working on this matter as well. Think of it as something like a non-profit endeavour.

It must be said, however, that Komodo distinguishes itself slightly by offering more than just interoperability solutions: it also offers privacy and enterprise focused solutions, and these are both in high demand in the market. For that reason, Komodo seems like a safe bet when it comes to investment and certainly one that puts in a decent position for the future. For businesses to have these various solutions - interoperability, customizability, business cases - all wrapped up into one is an easy sell.

The Komodo Platform is undoubtedly a neatly packaged multi solution multi-chain platform that has a lot going for it. It offers several solutions backed by years of strong development and demonstrable output, which many other projects cannot boast of. While the interoperability space is a tough one with many projects being equally, if not more, tantalizing investments, it is perhaps better to think of the Komodo Platform as a business focused platform with other features that together make for a worthwhile examination.

The project is one that can wholeheartedly be recommended, at least for the purpose of monitoring in the near future. Keep an eye on the project and the space in general, because interoperability will really play a pivotal role in the growth of the market in the near future. 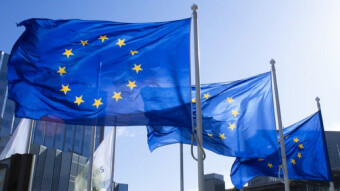