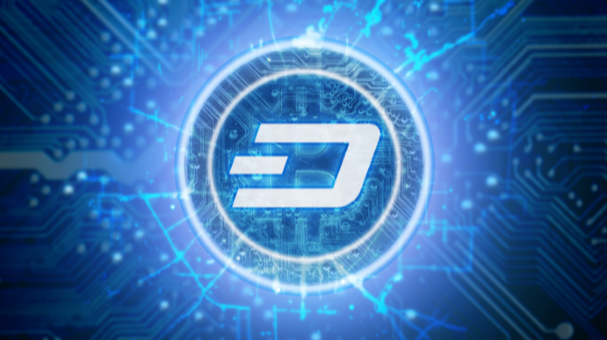 What is Dash? [A Comprehensive Guide to Understanding Dash]

Being one of the top 20 cryptocurrencies, Dash is undoubtedly one of the most promising projects in the crypto industry. Not just because of its privacy-centric approach but also because it’s fast. The intent of Dash is to send cryptocurrency faster than cash while still respecting your privacy at the same time. According to the official website, Dash is meant to be spent as ‘digital money’ that is better and more instantaneous than cash. In this article, we will discuss the history of Dash, how we got here, and whether the ‘claim’ about Dash being better than cash holds weight or not. Let’s get started. 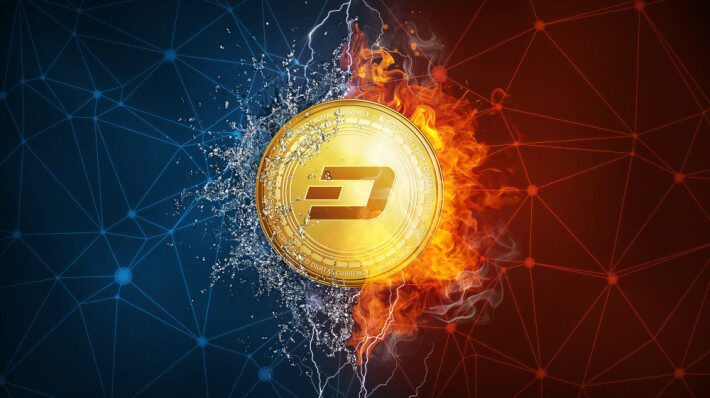 Dash was created in 2014. At the beginning of its existence, it was called Xcoin. The main focus of Xcoin was to improve privacy and untraceability. The co-founders Daniel Diaz and Evan Duffield made a bold statement that this coin was supposed to be the “privacy-centric cryptocurrency” version of Bitcoin. It became Darkcoin before it got rebranded to Dash. Basically, Dash is the shortened version of “Digital Cash”. Before the rebranding to Dash, Darkcoin was a fork of litecoin v0.8.6.2 and then checkpointsync-code from Peercoin was added into the code.

The team behind Dash is called the Dash Core Group. The team include Ryan Taylor as CEO, Andy Freer as CTO, Fernando Gutierrez as CMO, Evan Duffield as Strategy Advisor, and several other key people.

During the history of Dash creation, there was this controversial event that still haunted the Dash core group until today. It was called the “instamine controversy”. It happened during the first two days of the coin’s beginning. At the time, 1.9 million coins were instantly mined. 1.9 million coins out of total 18.9 million max supply of DASH means 10% of the supply was instantly issued within a very short period of time.

The co-founder Evan Duffield stated that this instamine controversy happened due to the bug caused by the Litecoin forked code. While the core developers fixed the issue, but the ‘solution’ proposal to airdrop the coins for broader initial distribution was rejected by the Dash community. Another proposal to ‘relaunch’ the coin was also rejected.

The show, however, must go on. Dash gains its popularity after the ‘rebranding’ and the focus shift to become a fast and cheap peer-to-peer cryptocurrency that put its focus on adoption. Previously, the focus was heavily on the privacy features. Well, Dash is still considered a privacy coin, but nowadays the ‘brand’ of Dash is to support fast and cheap cross-border transactions. Many people believe Dash usage has been growing in developing countries, particularly in countries where the local fiat currency keeps failing such as Venezuela.

Recently, another big controversy hit the Dash project. It was believed a Dash core senior advisor disappeared with investor funds. This incident, obviously, did not help Dash's popularity in the eyes of crypto traders.

The Purpose of Dash 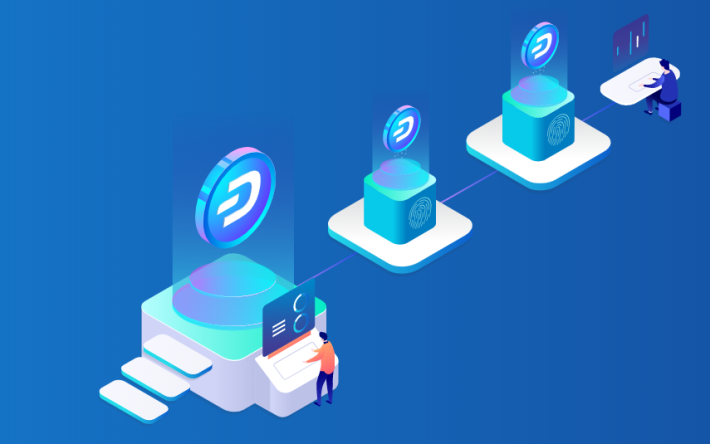 Dash was meant to be a privacy-centric cryptocurrency, but now it’s known as a fast and cheap cross-border P2P coin. Of course, Dash still promotes its privacy feature such as ‘PrivateSend’. But, these days typically Dash made it to the news when Dash supporters boasted about Dash’s transaction speed and costs.

Just like all the cryptocurrencies that were created pre-Ethereum era, the main use case of Dash is only for cross-border transactions. Dash is mostly famous for people from developing countries who want to send money abroad to their family and loved ones. Considering the failure of the fiat system in Venezuela, many people over there have started to utilize Dash to send and receive money.

The official website, dash.org, boasts Dash’s ability to send money from one wallet to another within just 1 second. The same website also brags about Dash adoption rate. By Q2 2019, Dash has been widely accepted in more than 4800 merchants worldwide as well as more than 150 exchanges and brokers.

The Dash team also prioritize businesses and retailers as its adoption focus. At the moment, there are more than $3.3 billion worth of Dash volume (data from Q2 2019). Dash can be easily integrated with e-commerce plugins such as WooCommerce, Shopify, Magento, or ZenCart.

Different from Bitcoin, Dash utilizes X11 algorithm. X11’s hashing algorithm uses a sequence of 11 scientific hashing algo for proof-of-work. Not only the difference in algorithm (compared to Bitcoin), Dash also utilizes MasterNode concept to make verification of transactions easier and faster. The masternodes have to stake and lock 1000 DASH coins. And of course, the masternodes will get economic incentives because their roles here are to verify and validate transactions inside the blockchain.

PrivateSend: Different from InstantSend, the purpose of PrivateSend is to conceal your transaction. As we have mentioned earlier, the original purpose of Dash was to be privacy-centric. This PrivateSend feature ensures that ‘privacy-centric’ approach. The origins of the senders’ funds will be obfuscated with PrivateSend. Once again, we will use an example:

1. Anthony wants to send his DASH coins to Billy using PrivateSend feature. The transaction input is broken down into discrete denominations such as 0.1 DASH, 1 DASH, 10 DASH, and 0.01 DASH.
2. Anthony’s DASH wallet then automatically asks a masternode to mix a certain denomination of DASH coins
3. The same masternode broadcast a message to the blockchain saying it is ready to mix a denomination for Anthony’s DASH wallet
4. Two other users (other than Anthony) who also request to mix the same denomination of DASH coins, are automatically included by the same masternode
5. The masternode then mixes up the inputs and the three users will have to do the mixing sessions several times
6. Once all the users finish their mixing sessions in several different rounds, the fund origins become obfuscated and now the transactions are untraceable

So, the PrivateSend is very useful if you want to ‘hide’ your track in the blockchain. And of course, it’s normal to prioritize privacy when it comes to transfer of funds. Along with InstantSend, PrivateSend feature makes Dash blockchain unique compared to other peer-to-peer cryptocurrencies. 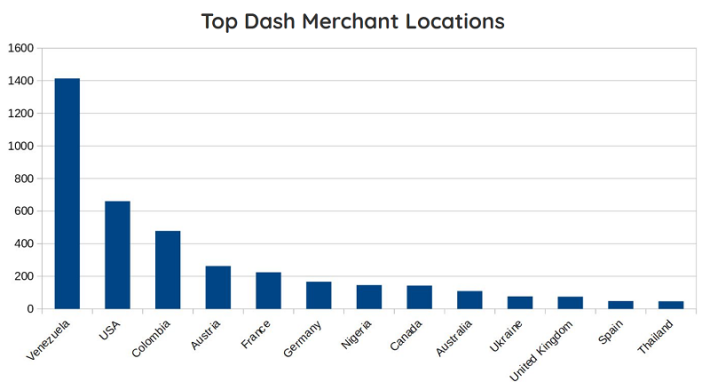 It’s quite easy to check which merchants have accepted Dash. You can go to discoverdash.com which is endorsed by the Dash core team. According to the stats by discoverdash, there are more than 4000 merchants that accept Dash as a form of payment. 1400 of them are located in Venezuela, and more than 600 are located in the United States. The majority of these merchants are Dash-based ATM machines and local restaurants. Dash’s main focus is to become a digital cash, so it’s understandable why many of Dash partners are just places where you can buy drinks or foods.

Dash’s competitors can be broken down into two categories. From the ‘privacy’ perspective, Dash’s biggest rivals are Monero and ZCash. Both of them have their own privacy built-in features that can help you to anonymize your transactions. Meanwhile, from the ‘speed’ perspective, Dash’s biggest competitors are other fast and cheap coins like Litecoin, XRP, XLM, or TRX. Considering Dash’s biggest use case is to be spent as digital cash, it’s more likely in the future Dash will see other fast and cheap coins (not privacy coins) as its biggest rivals.

Dash In The Crypto Market 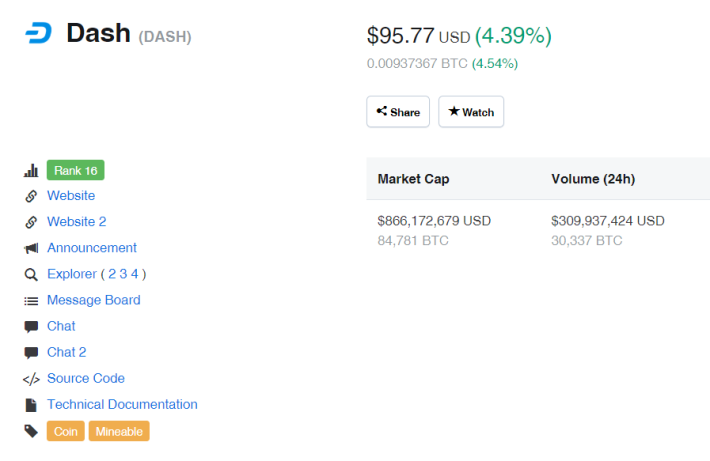 In the crypto market, Dash is considered one of the top altcoins. At the time of this writing (September 14th, 2019), Dash is ranked 16th on the cryptocurrency rankings. The market cap is $828,969,231 USD and the daily trading volume is $253,513,521 USD. It looks like Dash has enough liquidity to support large transactions on the crypto exchanges. You can trade your Dash coins in many crypto exchanges like Binance, OKEx, Huobi, BW.com, or Coinbase Pro.

DASH is one of the best cryptocurrencies when it comes to adoption rate. Many merchants in Venezuela has accepted DASH, and the statistics look much better than many of its competitors. The fact that Dash’s InstantSend transactions are very fast and cheap make this coin even more attractive in the eyes of crypto enthusiasts. It’s easy to see how DASH will have its own place in the future of the crypto market.

However, there are some huge controversies that have happened in the past and recently. Always trade cautiously.