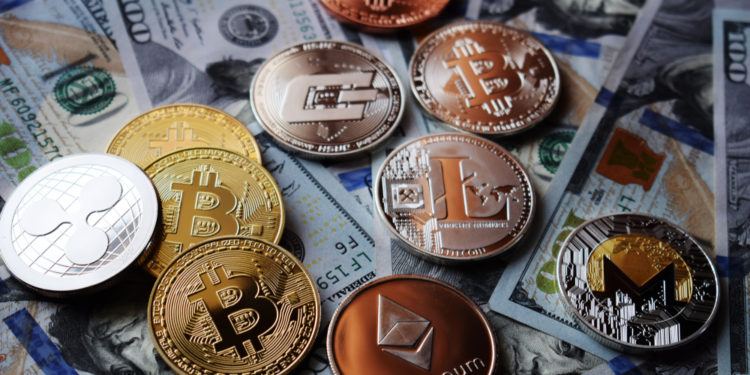 Here is part 2 for my August price prediction. If you would like some analysis on the top 5 projects for August, head on over to my last article over here. Bitcoin is finally heating up again after managing to claw its way back to the $10,000 level. However, the sad news is that the majority of the altcoin market is still looking pretty bearish at this moment (although this is decreasing) as many projects are trapped in a period of consolidation still.

EOS has continued its descent this week, after dropping by a total of 7% to bring the price of the coin down to the $4.26 level. The good news is that the pace of the descent is starting to slow down which could be perceived as an initial promising sign for the bulls.

EOS is now ranked in the 8th place amongst the top cryptocurrency projects as it presently holds a $3.96 billion market cap value after seeing a 24% price over the past 30 days. 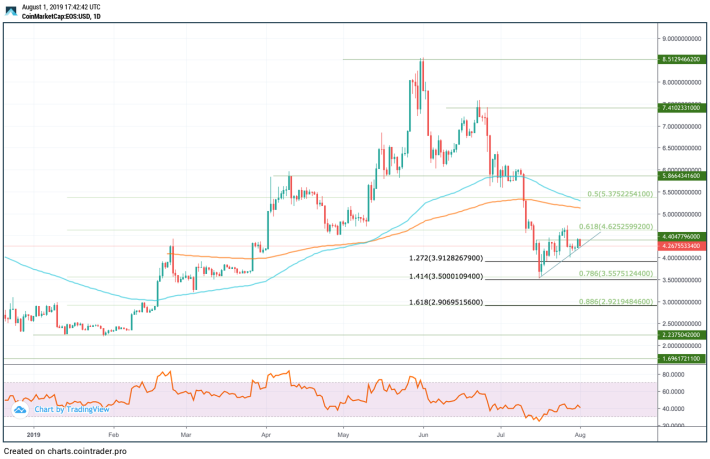 Analysing the market above, we can see that EOS has fallen from the resistance seen at $4.62 but had managed to find support at a rising trend line. EOS has managed to stay above this support trend line and remain above the $4.00 support level but has failed to make any movements higher - which leads me to suspect that we could be dropping beneath this trend line pretty soon.

If we do fall beneath the support trend line we can expect immediate support to be located at $4.00. If the selling continues further below $4.00 we can then expect further support at the downside 1.272 Fibonacci Extension level priced at $3.91. This is then followed up with strong support around $3.50 which is provided by both the downside 1.414 Fib Extension and the short term .786 Fibonacci Retracement.

If the selling continues further beneath $3.50, the next level of support is then to be expected around $2.90 which is provided by the .886 Fibonacci Retracement level and further bolstered by the downside 1.618 Fib Extension.

The RSI is well below the 50 level and is pointing downward again which indicates that the sellers are still in control of the market momentum - a bad sign for the bulls.

Binance has also suffered a sharp downturn during July after losing a total of 16% over the past 30 days. The cryptocurrency has rebounded slightly higher today by 3% which brings the price for the coin up to the $28.36 level.

Binance Coin is ranked in the 6th position in the market cap rankings with a value of $4.41 billion. The project had recently hosted a successful IEO on their Binance Launchpad which was the first IEO that required BNB to be held for a period of 7 days before the actual offering. 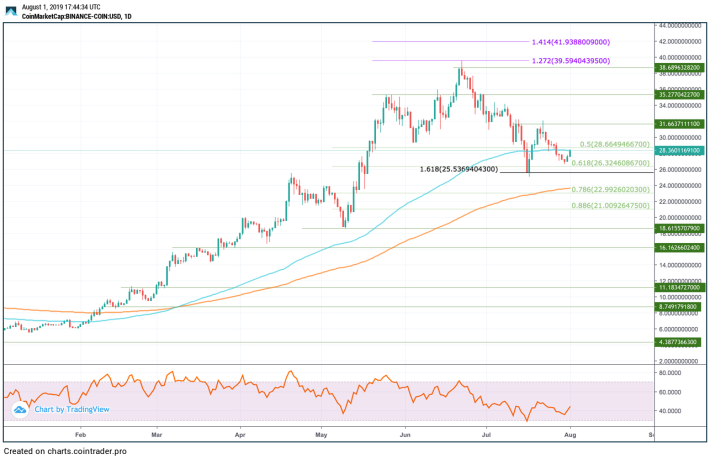 I am pretty bullish on BNB. This is one of the coins that will always have a use case regardless if the market is up or down as people are still trading. If the bulls can continue with the recent upward momentum and break above the 100 day EMA resistance, the next level of higher resistance lies at $30. Above $30 further resistance then lies at $31.66, $35.27, $38.68 and $39.59. If BNB continues to break above $40 and creates a fresh ATH, we can expect more resistance at $41.93.

The RSI is currently involved in a battle at the 50 level as the bulls attempt to gain control of the market momentum. If they are successful, we can expect BNBUSD to break higher toward the upside.

Stellar has had a relatively quiet year in comparison with the rest of the top projects. Stellar had even created a fresh low during February 2019, something which the majority of other cryptocurrencies did not do. XLM had attempted to break higher but failed at the $0.15 level. The trouble has gotten worse for XLM after dropping by a total of 20% over the past 30 days which has brought the price for the coin down to $0.082.

Stellar is ranked in the 10th position with a total market cap value of $1.61 billion. 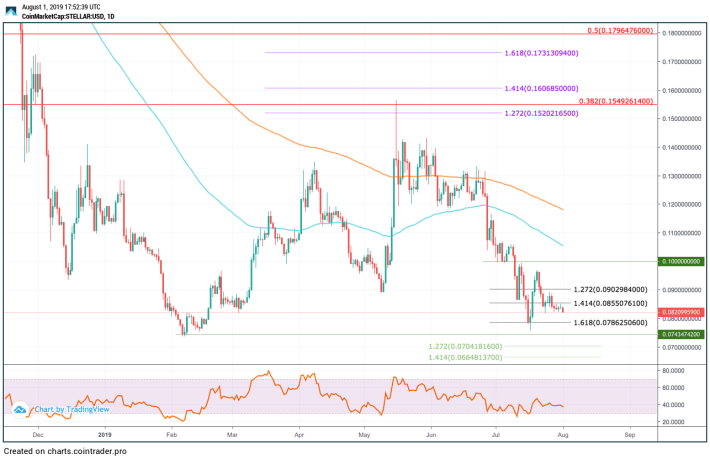 Taking a look at the chart above we can clearly see the stagnant year that XLM has experienced. During July, the selling pressure increased which saw the market hit a low around $0.078. XLM is now trading at $0.082 and is trending downward once again.

If the sellers continue to push lower, we can expect immediate strong support at the downside 1.618 Fibonacci Extension level priced at $0.0786 which had provided strong support for XLMUSD during July 2019. Beneath this, further support can then be found at $0.0743 which is the February 2019 low.

The RSI had recently attempted to break above the 50 level but had failed which had allowed XLMUSD to drop back toward $0.08.

Tron has suffered greatly after the lively period seen last week. TRX has now dropped by a total of 5% over the past 7 days to bring the price for the coin down to $0.022. Furthermore, Tron has now suffered a 30 day price drop which totals 30%.

Tron is ranked in the 12th position as it holds a $1.47 billion market cap value. 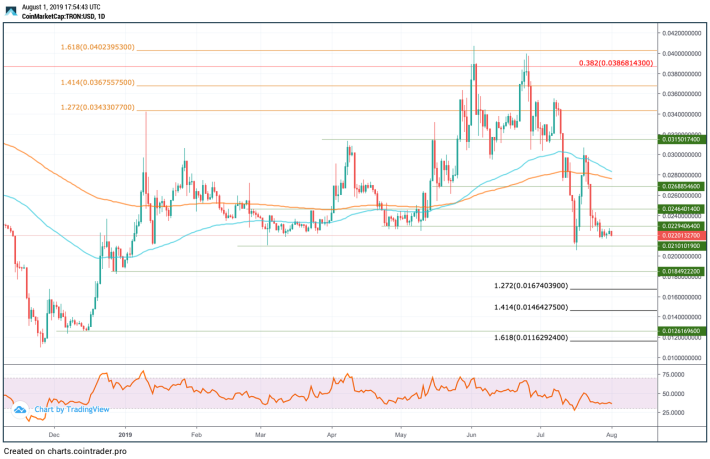 Analysing the chart above, we can see that the 100 day EMA level at $0.03 had caused resistance for TRX which helped to push the market lower. Tron is currently trading at the support that was seen during March 2019 but is likely to continue to trend downward by the looks of things.

The RSI is well in the territory of the bears which gives no hope for the bulls to make a rebound at this point. We will have to wait for support lower for this to be possible.

Cardano has seen a relatively stable 7 day period in which price action had dropped by only -1.36%. The cryptocurrency is trading at a price of around $0.0582 as it follows the trajectory of a short term consolidation pattern.

Cardano is ranked in the 11th place as it presently holds a $1.52 billion market cap value. 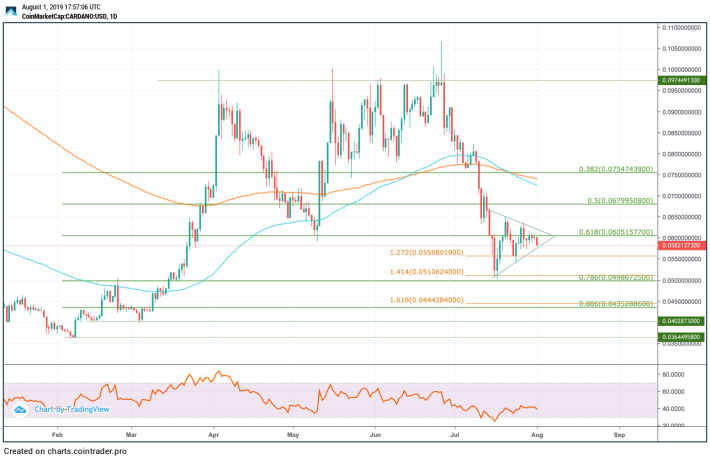 Looking at the chart above, we can clearly see the symmetrical triangle that ADA is trading within. The market is currently about to test the lower boundary of the range and, unfortunately, it is likely to drop beneath.

The bulls had attempted to gain control of the market momentum recently but had failed to do so. Furthermore, the Stochastic RSI has recently produced a bearish crossover in overbought conditions which further aids the case for the bears.

XMR has also seen a stable 7 day period in which prices have barely moved as XMR trades around $80.73. The cryptocurrency is currently in a battle with resistance at the 200 day EMA but is looking rather bullish relative to the rest of coins on this list. 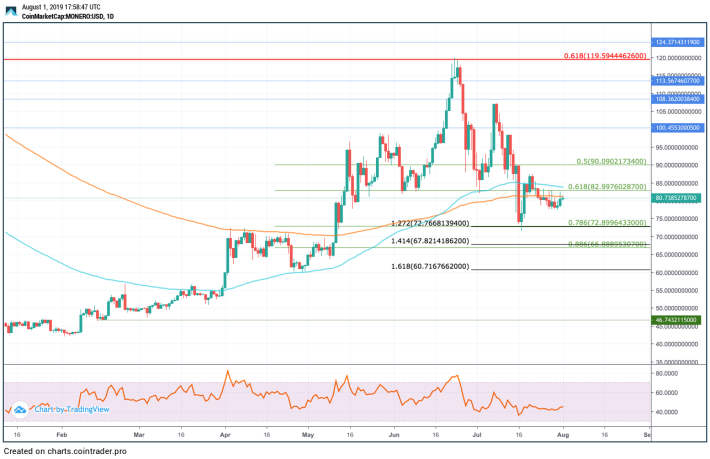 We can see that XMR had dipped lower during the week but had managed to find support at $78 where a rebound was seen that pushed XMR back above $80. If the bulls can break above the 200 day EMA resistance, there is further resistance slightly higher at $83 provided by the 100 day EMA.

If the buyers can continue to climb higher above this, further resistance then lies at $90, $95, $100, $108 and $113. The RSI is looking promising as it attempts to gain traction over the 50 level. If it is successful, we can certainly see a promising month ahead for XMR.

However, if the resistance at the 200 day EMA is too overpowering for the bulls and the market drops lower we can expect immediate support at $78. Beneath this, more support is expected a the .786 and .886 Fibonacci Retracement levels at $72.89 and $66.88, respectively.

So there you have it! My August predictions for these altcoins. If you would like me to add your favourite altcoin to this analysis list for next time, please let me hear it in the comments below.