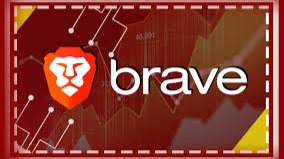 I have realized a large portion of my blogs so far have been related to the Brave Browser which when I decided to start doing this blogging last month was not my plan! My brother recently read some and as a joke said I should just start a series on it and number the posts which I found funny! He then said a little later it would make sense to do it so people could follow along so if y’all would like that please let me know below!

Now to the real point of this post! Earlier this morning I posted about the reward payouts my parents and I received which you can read here. To summarize my dad hit spot on with his rewards, but my mom however for a whole month earned a whopping 2.000 BAT..... I will be monitoring hers more now because she is a teacher and thus is heavily using it.

I also mentioned that I had gotten a random payout of 5.520 BAT from Brave Software International. When checking my Uphold wallet I was perplexed because I had never received BAT there before. For those of you who do not know Brave breaks down in your uphold wallet if you are a publisher to Brave Browser, where I get my typical payouts from the browser itself, and Brave Rewards, where my publisher rewards go.

This amount had gone into my Brave Browser wallet and so I had thought I had never received BAT from Brave Software International. Further investigation though lead me to find out that Brave Publisher rewards come from Brave Software International. While I have at least found the source and where it comes from that wallet had never received BAT from that address.

This has lead me to a few possible conclusions and they are far from ideal. This amount could be either:

a) my referral payment which considering it is supposed to be $7.50 in BAT is extremely off
b) that is somehow my tip amount that on my publisher home screen was 9.5 BAT
c) this is some sort of adjustment to the payout I would receive

Ideally, it would be c and this amount would hopefully be added to one of the payouts either my regular browser or my publisher amount. The Publisher dashboard says I have earned 27.16 BAT so adding to it 5.52 would make it closer to what it should be but still not exactly right. An issue with this idea though is that it went to the browser wallet and not the publisher one. This has me hoping that it is an adjustment for one of my computers payouts.

Brave still has not exactly ironed out how the payments are displayed on their browser and below I am attaching photos of my browser payouts. 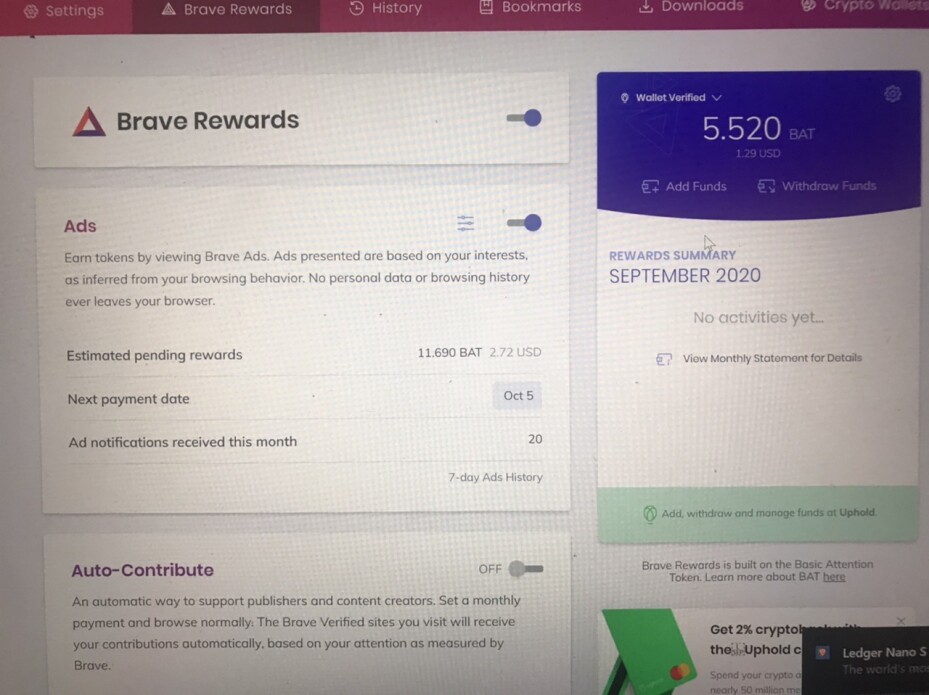 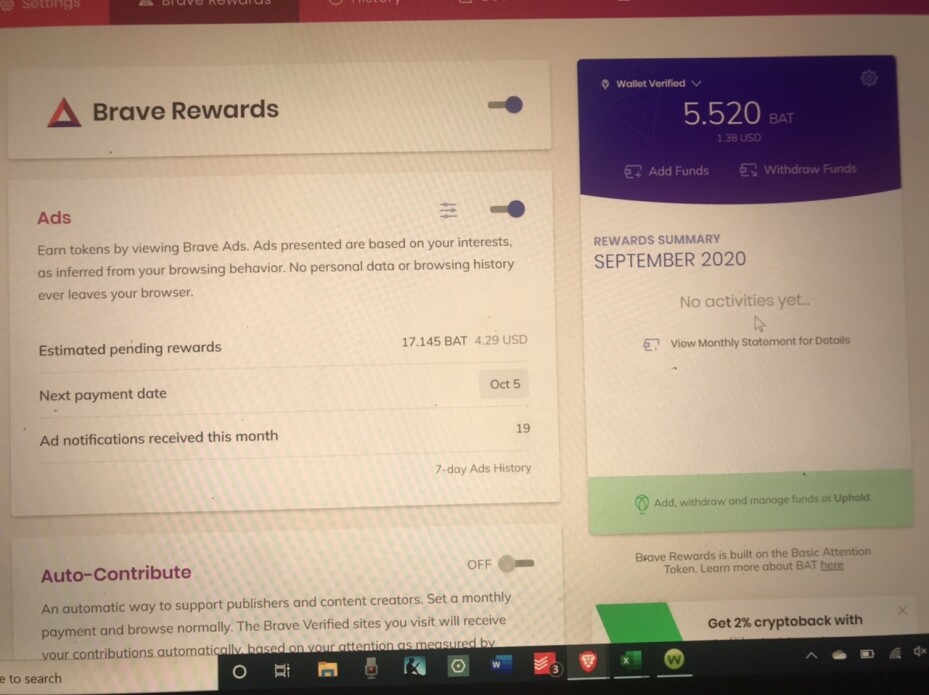 As you can see it has already rolled over to the next month for payouts and the amount owed has not changed. While I have had this occur before it is a little concerning with the random payout that I received from Brave Software. Could this considering these were roughly the amount I was owed due to how much the cutbacks were 5.52 BAT does not make anysense what so ever for the 11 BAT and 17 BAT I am owed.

I have been and continue to be a huge Brave advocate and believer in what they are doing however this is really bizarre and in the comments for the transaction there is no explanation for what is occurring leaving the users in the dark. My hope is that I now get 3 payouts for the two computers of mine that have the browser and independently get the publisher amount. However at this point it anyones guess on what is going on. The Mega Thread does not open till Tuesday due to the weekend and Labor Day on Monday hopefully the more answers are posted soon on the Brave Community website. If you have any ideas, answers or further questions you would like me to explore please comment below! Oh and also if my brother had a decent idea or if yall think he was messing with me cause honestly its a little hard to tell sometimes.......