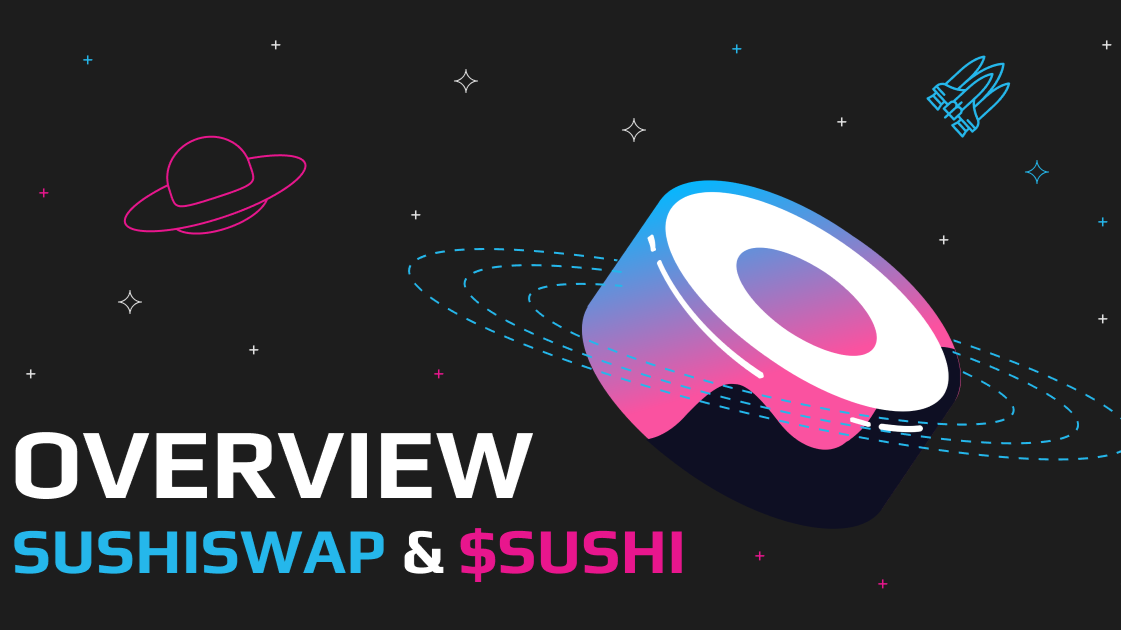 Would You Like Some Crypto Sushi? SushiSwap And $SUSHI Review

SushiSwap (SUSHI) was created in September 2020 by two anonymous developers known as Chef Nomi and 0xMaki. This article outlines all you need to know about SushiSwap and how you can buy the SUSHI coin.

On the Ethereum blockchain, SushiSwap is one of the most popular Decentralized Applications (dApp). SushiSwap’s decentralized exchange (DEX) protocol employs the automated market maker (AMM) concept. Simply put, SushiSwap does not have an order book. Instead, it uses smart contracts, making it easier to purchase and sell cryptocurrency as an algorithm sets the price.

SushiSwap is a decentralized Ethereum-based exchange that was cloned from Uniswap. SushiSwap lets you exchange a variety of tokens and use other financial services. There are no centralized authorities in this system. Instead, it completes trades using smart contracts or codes that automate processes and liquidity offered by other users.

How does SushiSwap work?

SushiSwap can only be used to exchange one cryptocurrency for another; it cannot be used to trade fiat currencies for crypto or vice versa. This is because it employs the Automated Market Maker model.

Users can add liquidity by sending SushiSwap equal-value amounts of two cryptocurrencies. They are given Liquidity Provider (LP) tokens and can start receiving rewards in exchange. Users can earn additional APY rewards by depositing their newly created LP tokens into yield farms. This provides an extra incentive for users to remain a part of the liquidity pool.

Key features of the SushiSwap project

SushiSwap has several features that distinguish it from other decentralized apps. Decentralized exchanges, such as SushiSwap, have become an essential part of the financial ecosystem because they provide equal trading opportunities. SushiSwap’s key features include:

Creation of liquidity pools: SushiSwap operates by using smart contracts to create liquidity pools. The traders have access to the users’ locked assets on the protocol. All donors to the liquidity pool receive two benefits: the form of fees paid by traders when accessing assets and the other in the form of tokens. The fees are dispersed among all contributors in proportion to their pool contribution.

Offering loans through BentoBox and Kashi: The SushiSwap’s BentoBox is a lending market. Users must keep each token for trading pairs in a single contract due to this. This is accomplished using Kashi, a loan and margin trading platform built on BentoBox. It’s a method of creating highly personalized and gas-efficient protocols for lending, borrowing, and collateralizing various synthetic assets, tokens, and crypto-assets.

Support of several dApps through Bentobox: BentoBox serves as a vault for many decentralized applications (dApps). Furthermore, users can profit from BentoBox’s power. The most significant benefit of using BentoBox to create dApps is that they are already approved and save customers money on network wallet fees. In addition, these dApps are extremely gas efficient, allowing users to interact with them at lower costs.

Sushi coin is an ERC20-based token that powers SushiSwap, an Ethereum-based decentralized cryptocurrency exchange, and automated market maker. Holders of the Sushi token (SUSHI) can participate in community governance and stake their tokens to obtain a share of SushiSwap token transaction fees.

Liquidity mining is used to distribute $Sushi token to SushiSwap liquidity providers. The maximum supply of Sushi coins (SUSHI) is 250 million, with a circulating supply of over 192 million sushi coins out of 241,602,267 SUSHI.

Swap: Swap allows users to trade one cryptocurrency for another, such as turning your Tether (USDT) into sushi coin (SUSHI).

Limit Order: The Limit order product enables the SushiSwap crypto trader to place a variety of limit orders for various tokens while maintaining the same underlying capital. The suppliers of decentralized limit orders, such as Sushi exchange, don’t have to take any risks because the filler bots generate profit from every order filled.

MISO: MISO is a set of open-source smart contracts designed to make launching a new project on the SushiSwapexchange as simple as possible. MISO is the Sushi crypto exchange community’s unique platform for launching projects.

BentoBox: The BentoBox is a token vault that pays interest on money invested in it. BentoBox’s standout feature is its ability to track users’ deposits using an artificial balance for accounting for their idle cash while funds are applied. As a result, the BentoBox generates income for these funds while preventing losses.

Kashi Lending: Built on the BentoBox, Kashi is a lending and margin trading platform that allows anybody to establish gas-efficient markets for lending, borrowing, and collateralizing a range of DeFi tokens, stable coins, and synthetic assets.

The DEX platform indicated that significant upcoming advances in the DeFi space would feature complicated and advanced functionalities, such as a cross-chain DEX enabled by Rune and Moonbeam, a Polkadot implementation, and a genuinely decentralized governance system.

According to the press release, the site would also showcase the introduction of BentoBox, a new loan product. In addition, updates on earlier announced projects were also presented, including a v2 launch dubbed ‘Mirin.’

Aside from that, the platform mentioned a potential integration with ArcherDAO. In addition, support for algorithmic stablecoins FRAX, DSD, and BAO will be added soon.

SushiSwap co-founder 0xMaki discussed the idea of the ever-expanding and well-incentivized SushiSwap. He indicated that he wants to encourage people to productize assets by making them join a DAO. He plans on introducing a broader audience to the DeFi ecosystem and feature emerging decentralized applications prominently on the Sushi platform.

The primary plan for 2021 was to move to a new domain representing SushiSwap as an OpenOrg part of the Yearn ecosystem and not an automated market.

Presently, SushiSwap has accomplished some projects in their Roadmap, like BentoBox, while the others are still to come soon.

Uniswap VS SushiSwap VS 1 inch

Let’s look at some of the competing platforms for better understanding of which one we should choose after all.

Reward system for newer coins: Uniswap does not give any additional rewards to new coins launching on its platform, while SushiSwap includes an “Onsen Program” function that acts as a liquidity provider for new coins. The platform encourages more recent and smaller projects by providing greater SUSHI rewards to holders of these newer tokens through the Onsen mechanism.

SushiSwap and 1inch are both decentralized platforms. Additionally, they have governance tokens for voting on proposals. However, this might be where the similarities end, as they are significantly different platforms, and here are their differences:

Platform: SushiSwap is a decentralized platform that offers standard financial services via a peer-to-peer network. Staking, lending, borrowing, and trading are all available. 1inch, on the other hand, is a DEX aggregator that brings together many DeFi systems. You can trade on 1inch, but it specializes in assisting users in executing profitable trades.

Liquidity: SushiSwap rewards liquidity providers but struggles to find liquidity. On the other hand, aggregators such as 1 inch address the issue of liquidity scarcity. They boost liquidity and speed up execution by searching across platforms.

SUSHI exchange: where and how?

SUSHI can be exchanged in a few different ways. Using a SUSHI coin exchange enabled platform like Swapzone is the most common way. On Swapzone, users can quickly locate the best SushiSwap rates and convert any cryptocurrency to SUSHI tokens.

Swapzone gives the best exchange rates, providing you with information on crypto exchange offers and services to pick the best and convert cryptocurrency instantly, with low fees and no registration required. Here you can find the best rates for SUSHI in real-time and exchange SUSHI without KYC verification following simple process.