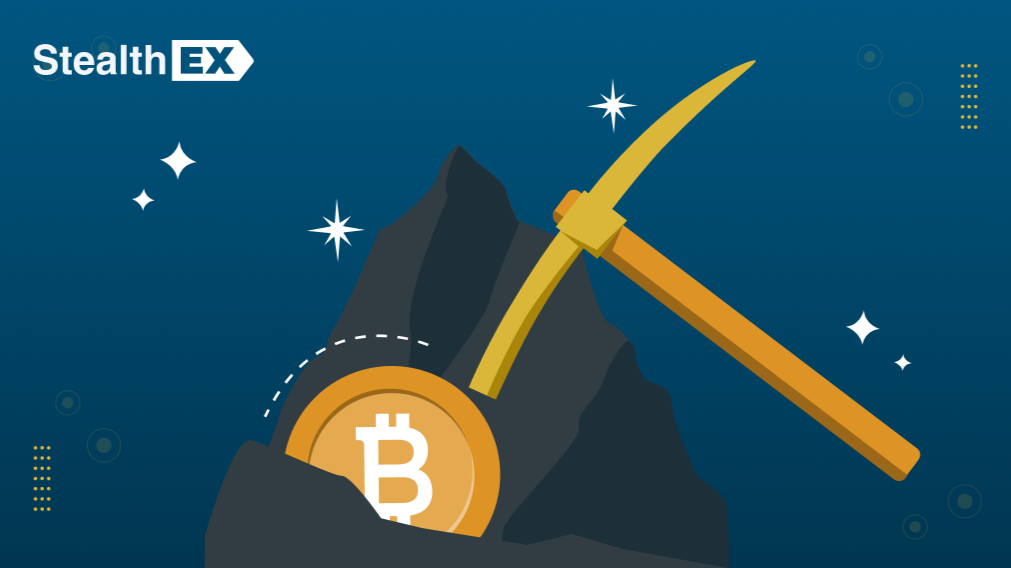 Many people are beginning to mine cryptocurrency because they see it as a secure alternative to fiat money. Digital asset investments are already becoming more profitable and understandable than the usual sources of investment. However, before you start mining, you need to study the StealthEX guide on cryptocurrency mining for dummies.

What Is Crypto Mining For Dummies?

Mining is the process of using computer power to create new blocks, secure them, and create new records in a shared distributed database, the blockchain.

The greater the number of miners and the more computers involved in the process, the more stable the entire system is. Thus, miners keep the network alive and get remuneration in cryptocurrency.

How Does Cryptocurrency Mining Work?

Mining involves computers solving mathematical problems that result in finding a new block and adding it to the blockchain. Miners are rewarded in digital coins for this work.

The miner then withdraws the coins he receives to the wallet he uses for the cryptocurrency in question.

The time to mine another block depends on the complexity of the network. If you want to know about Bitcoin mining explained for dummies, you should know this process takes 10 minutes to create 1 BTC block.

The complexity of the network is constantly increasing, and the number of coins that can still be mined is decreasing. Along with this, the reward per block is decreasing, and as a result, miners are earning less.

Cryptocurrency mining can be classified according to the equipment used. There’re 7 primary ways of mining:

Each cryptocurrency uses a specific encryption algorithm, and it’s decrypted during the mining process.

Cryptocurrency algorithms are a set of cryptographic mechanisms and rules that encrypt digital currency. Most networks use Proof of Work or Proof of Stake.

Proof of Work implies that the miner with the most processing power can find more blocks and get more rewards.

A miner’s profits depend on the power of their equipment (hash rate). Miners process transactions, including them in a new block, and receive a reward proportional to the power spent.

In Proof of Stake, the user’s profit doesn’t depend on the power of the equipment, which the PoS algorithm doesn’t need at all, but on the number of coins in the wallet.

The key condition is to constantly synchronize their cryptocurrency with the network. In this way, the owners of digital assets keep the network running and get remuneration for their work. In this case, the longer the money is in the digital storage, the higher the earnings of the miner.

How To Choose A Cryptocurrency For Mining?

To choose a coin for mining, it is necessary to be guided by the size of the investment. Mining Bitcoin and other top cryptocurrencies are already off the charts and require a lot of equipment costs. So, it’s wise to start with affordable altcoins.

Overall, the mining industry is changing at breakneck speed. As the process became more complex and profitability dropped, the types of mining started changing. While initially only Bitcoin was mined, users started learning what is Ethereum mining for dummies and how to mine altcoins. In general, mining can become a passive way to earn money. The main thing is to choose the right token and to be aware of the risks.

Where To Buy Crypto?

And finally, if you are interested in blockchain technology and decide not to wait, you can buy some crypto right now, turn to an instant cryptocurrency exchange StealthEX. This service is free from registration and does not store users’ funds on the platform.

Just go to StealthEX. It will automatically guide you to the «Exchange» crypto window.

You can also buy crypto with your debit or credit card. To do so, you need to open the «Buy» crypto window instead of «Exchange» crypto.