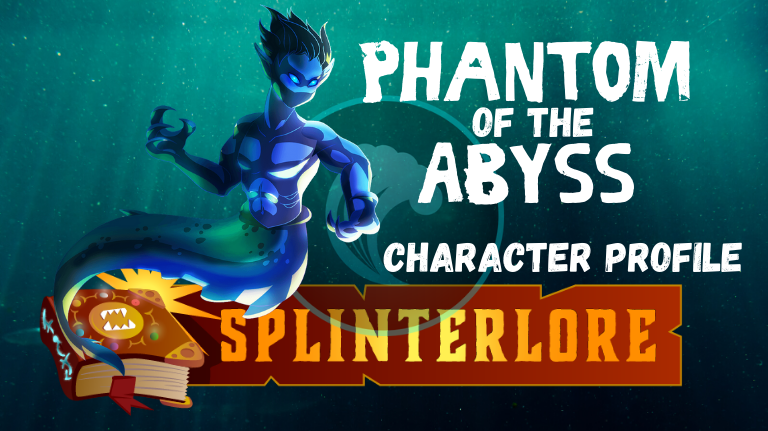 You must beware the deepest blue,
for deeper should you swim,
The blue will turn to black, and you'll
Be at the Phantom's whim. 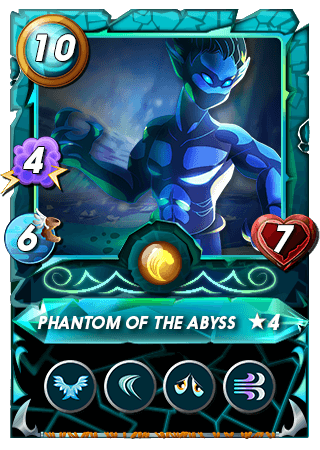 Phantom of the Abyss

Size - The Phantom of the Abyss is not large, but if he had cared to develop magically toward bulk and strength he would have done so. The true power of the Phantom lives in his mind. He is the size of a medium shark.

Lifespan - The Phantom of the Abyss is not a ghost as his name implies, but a dark and slippery amphibious creature. He was born from a single mysterious egg that fell to the bottom of the deepest trench beneath the Dark Water about 300 years ago. If he wished, the Phantom could survive out of water, but he finds the ocean a far more comfortable place.

Habitat - The Phantom of the Abyss lives directly beneath the Dark Water of ΛZMΛRÉ. Of course, the extreme depths at which he lives are always dark, but his glowing blue eyes are so piercing that they can sometimes be seen from the surface. The ghostly eyes are the reason that so many scary stories are told about the Phantom. The truth is that he is a protector of ΛZMΛRÉ and its people and the nightmarish stories about him have been grossly exaggerated.

Weapon - When he comes to battle at Mount Mox, the Phantom of the Abyss never wields a weapon. He sees the tournament battles as an opportunity to show off his incredible magic skills, which can cut straight through an enemy tank and land damage on the backline. His magic is intense and powerful. His main attack is known as the Rippleshock, and his other preferred spell, Impulse Grab, allows him to control the minds of his opponents. The Phantom also has a love of more traditional weapons that he recovers from sunken shipwrecks and lost treasures. Arranged precariously on the ocean floor he has a collection of spears, sword and daggers. They are all fascinating objects to the Phantom, but his most prized possession is the Pearl of Roth, which he won from the Ruler of the Seas in a bet half a century ago.

Diet - The Phantom of the Abyss is a bottom feeder; he typically eats from the things that fall into his domain. At those depths, there is a constant rain of organic particles from the waters above, such as tiny bits of fish and plants. This is the Phantom’s main source of food, but he despises its taste if it has already landed on the ocean floor. Whenever hungry, he swims along with a large net that collects the particles before they hit bottom. The children of ΛZMΛRÉ are told stories of the Phantom eating people, but he has actually never tried.

Allies - Under the intense pressure at the bottom of the sea it is a lonely life. The Phantom is able to survive there because of the way his unique slimy flesh allows water to flow through it to some degree. If he were not the only one of his kind and at the bottom of the ocean, Splintral scientists would be eager to study this magnificent trait (especially the genetic scientists of the Gloridax). The Phantom has visited the Ruler of the Seas on many occasions, and the two have always gotten along well. The two brilliant minds sometimes even play games with one another.

Enemies - Since the Phantom of the Abyss is an amphibian, he could live just as easily where there are more people, perhaps even out of the water entirely. He has gone into the abyss because that is what he chose for himself, and none of the stories of ΛZMΛRÉ can say why. Long ago, the Phantom made a decision that to protect the people of his land, he needed to separate himself from them. He knew that there was something inside him that he could not control, a dark enemy, a brooding chaos that always threatened to take over. It’s not madness, but one day it may be. And lately, since the uncovering of the various Untamed Prophecies, it has been getting worse. The Phantom wishes he could go deeper, but the ocean will not allow it.

Pastimes - The bottom of the ocean is an endless plain of wonderful curiosities. This is where the Phantom of the Abyss explores. It is his playground, his workshop and his home, and he never runs out of things with which to be fascinated.