Ninja Swap is a DEX on the Binance Smart Chain, with AMO ( Automatic Minting Offering), Farming, Staking, and fair Tokenometrics set-up. Runs on Binance Smart-Chain and can be easily accessed with Metamask. The dashboard is user-friendly and all tabs are in the left side of the screen: DEX, Farms, Stake, Bounty, AMO, CAKE Airdrop, Ninja Starter, Analytics, One Pager and More.

It's good to DYOR but have a look at the table below as a easy graphical representation about the current crypto set-up. No other platform has (yet) native lending, native stablecoin or no pre-minted tokens. 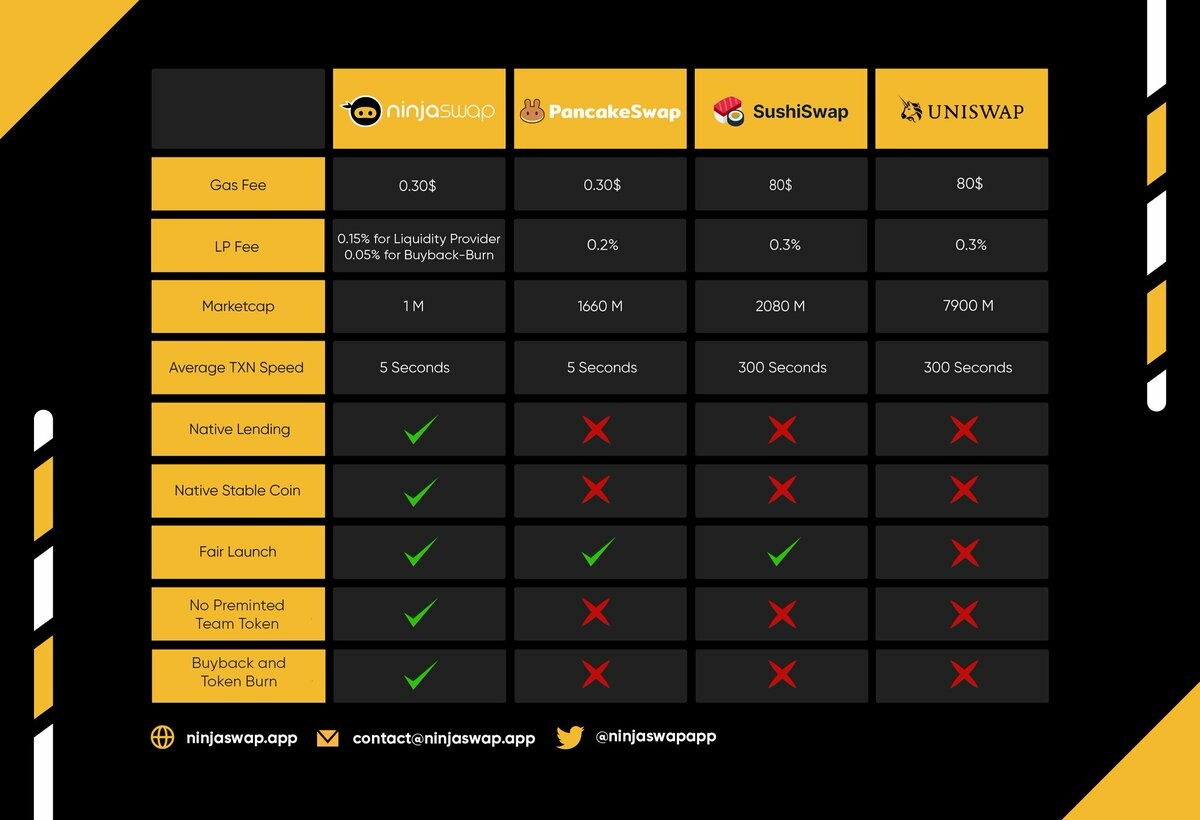 The NINJA token has a maximum total supply of 3,800,000 tokens, all minted on the Binance Smart Chain. From the total supply, a limited number was preminted for various tasks: 800,000 NINJA tokens were for farming and staking rewards, 120,000 for the CAKE airdrop and 80,0000 for bounty rewards. For an indepth review of Ninja Swap feel free to read Ninja Swap - The first ever Automatic Minting Offering (AMO) 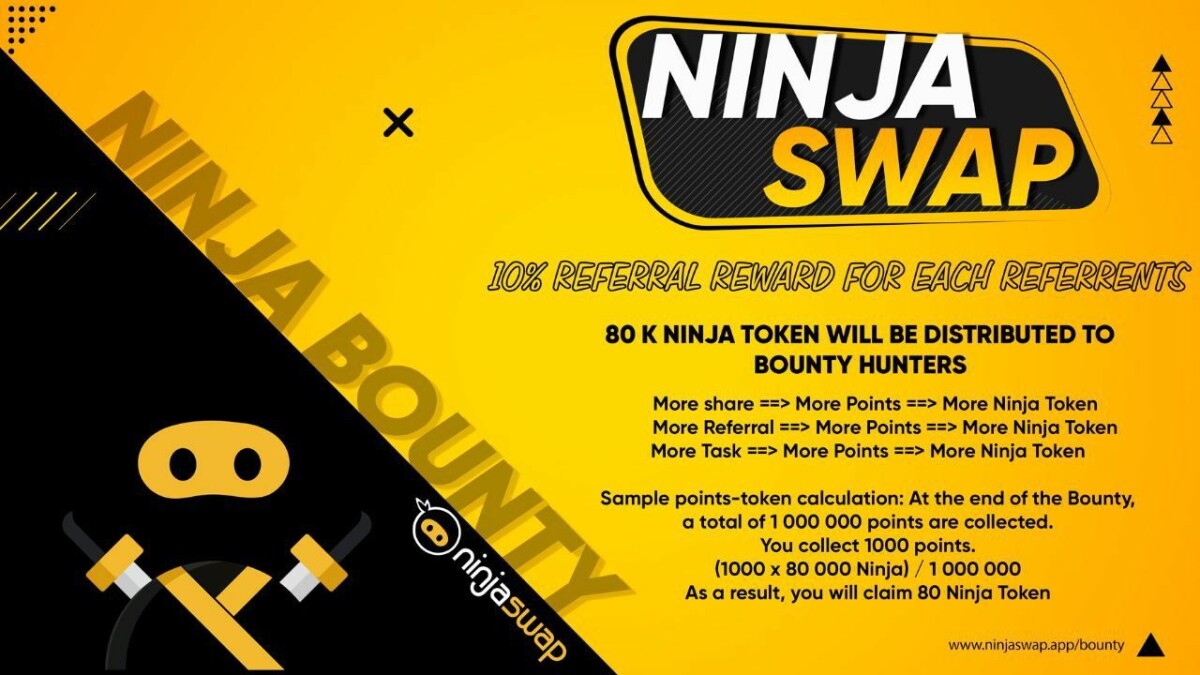 There are five bounties to complete! All including social media involvement and interaction. Completing all five will award a total of 230 points. Users can also earn 10% of the points earned by the people they refer. Fill your bag with BNB, CAKE and BUSD and go search the world for the ninja bounty! 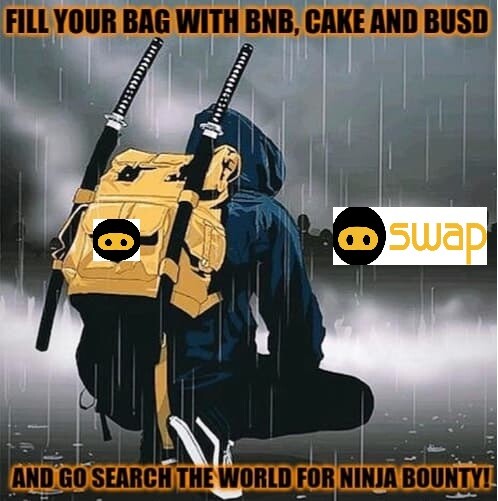 The first task is to join the Ninja Swap telegram group. The bounty task will be confirmed once you confirm your username, and 5 points will be added to the balance. The second task involves following Ninja Swap on twitter and than retweet the featured tweet, tagging five friends and adding the #NINJA #BNB #BSC tags. This two tasks will reward 20 points. 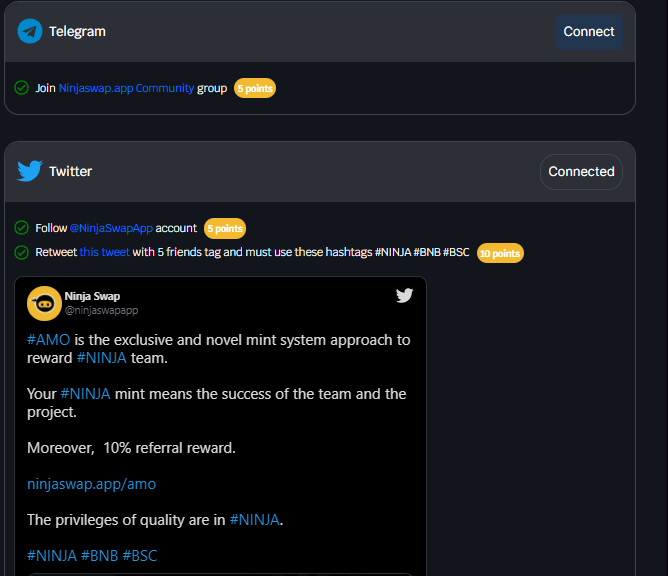 Memes? Anyone said memes? Yes please! Creating and adding three memes will be rewarded with 60 points.  I wish I could add more than three, as my mind is now on ... Ninja mode 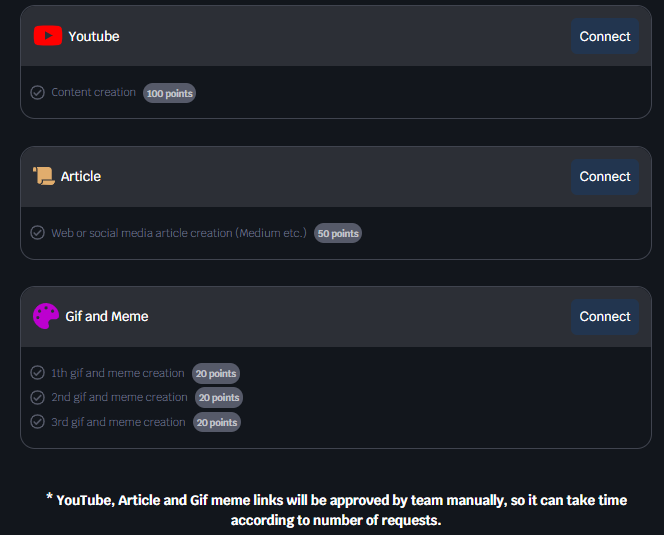 I asked on TG for clarifications regarding the deadline and the reward system for the bounty. The Ninja bounty is a gradual process that will be concluded approximately at the end of June. Also it is very likely that new tasks to be added gradually. The points collected by a participant will be multiplied with the 80,000 NINJA tokens allocated to the campaign and than divided by the total number of points collected by all participants. This will give result the share of the bounty awarded in NINJA tokens. Only one day after publishing the Ninja Swap - The first ever Automatic Minting Offering (AMO) article, I made 15 referrals and earned 14.5 points. The earned points are the equivalent of 10% of the bounty points they earned. 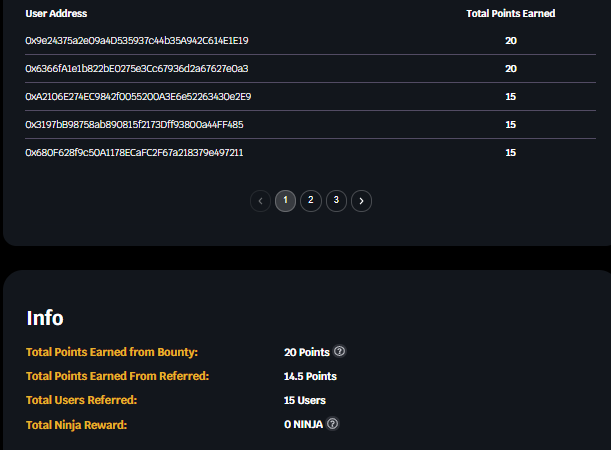