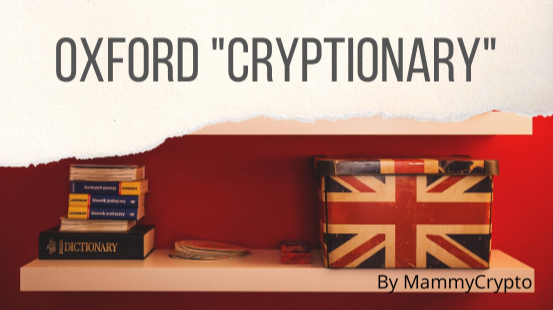 Cryptionary: The Crypto Basics According to Oxford Dictionary

It is very easy to find crypto related words and definitions on Wikipedia. However any definition is only completely accepted worldwide, by major institutions, once it has been added as a word to the Oxford Dictionary. So I gathered some few simple crypto words that only exists today because of Bitcoin. Definitions that have already been added to the Oxford dictionary and that will probably be recorded in history. This article was originally written in October 2019 but often being updated with few added words, so please check it out the most recent update.

1. Cryptocurrency: A digital currency in which encryption techniques are used to regulate the generation of units of currency and verify the transfer of funds, operating independently of a central bank. EX: ‘decentralized cryptocurrencies such as bitcoin now provide an outlet for personal wealth that is beyond restriction and confiscation’ Origin: Early 21st century from crypto- + currency.

2. Bitcoin:  A type of digital currency in which a record of transactions is maintained and new units of currency are generated by the computational solution of mathematical problems, and which operates independently of a central bank. EX: ' if you want to buy something using bitcoin you need to make sure the seller accepts the cryptocurrency’

3. Blockchain: A system in which a record of transactions made in bitcoin or another cryptocurrency are maintained across several computers that are linked in a peer-to-peer network. ‘we can actually have a look at the blockchain and see evidence of what's going on’   4. Cryptography: The art of writing or solving codes.

5. Satoshi: “A satoshi is the smallest monetary unit in the Bitcoin cryptocurrency, and is named after Satoshi Nakamoto, the—probably pseudonymous—developer(s) of Bitcoin.”

6. Stablecoin: Any cryptocurrency designed to have a relatively stable price, typically through being pegged to a commodity or currency or having its supply regulated by an algorithm.

7. Decentralized : (This word was coined before the existence of Bitcoin but one of the main characteristics of Bitcoin, so I felt it needed to be included) - (of an activity or organization) controlled by several local offices or authorities rather than one single one.

8. Decentalization: (This word was coined before the existence of Bitcoin but one of the words that embodies the Bitcoin Movement so I felt it needed to be included) The transfer of control of an activity or organization to several local offices or authorities rather than one single one. ‘efforts to promote decentralization and reform of the national political party’

And for now that is as far Oxford dictionary goes when it comes to Cryptocurrencies and blockchain technology. They fail to mention the definition of Litecoin, Ethereum or the word alt-coin. So I did not even attempt to go much further as those two seam to be the most popular ones in the market today. On another note I did find the meaning for computing Fork which I thought was quite nice: Split (a process) into two or more independent process. Hope one day they get to distinguish between a soft and a hard fork.

One of these days I will make sure to add  more popular definitions that we often use when talking about crypto in the real world. There are certainly many words, terms and slangs that are now part of the crypto and blockchain popular culture.

Feel free to dig into the only resource I used:    It will make you smarter instantly. Just kidding, read some!