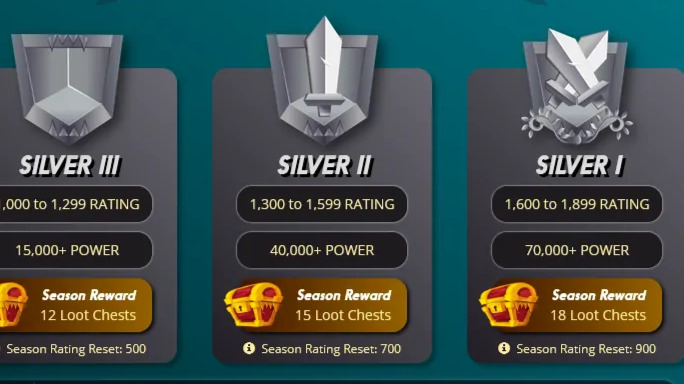 For much of the year my deck has reach mostly gold league at the end of every season I have played. However majority of the seasons I have stayed in silver league for most of the time. In this post I talk about the matches and situations I have good and and bad with playing in the silver league.

With Silver League being only league above novice there is not much a lot of potential in earning daily quest rewards. In addition the earned DEC per battle win is limited compared to higher leagues. At full 100% DEC bar I earn slightly less than 15 DEC per battle win. The real struggle is the daily chest rewards where at the lowest point of Silver League III I can only earn two daily chests while League I is four chests. The ability to earn more adds up for a long period of time, considering players in gold league can get up to seven chests daily it is almost double that of top silver league. In fact most of the season I do not get to play at Silver I league but lower so it makes the gap between stronger player versus weaker players widen when it comes to deck strength. Although not always the case having more chests means better rewards however the chances of better rewards are greater.

One game function that players sometimes overlook is at the end of a season all players no matter where they are ranked are reset to one few rank leagues lower. For me as I am mostly ending at gold league by season end I start off at Silver III more often than not at beginning of a new season. There are a couple of occassions this year where I was able to reach diamond, however due to lack of power rating I am unable to qualify above diamond.

Not as much of a draw back to start at a lower league but when persuing to earn more rewards and DEC / battle it is more difficult since I have to climb my way back up. As for someone who ends the season in diamond they would reset at gold and move up the ranks much quicker while earning more daily chests compared to silver.

Another less but well known draw back with league resets is that most players fall back into silver league and sometime I will be out match. My opponent may have full level monsters and summoners while I have barely enough of a card at level 1 versus a competitive one. The reset basically pushes majority of players back into ranks together so that it would make better random battles for all players. The draw backs are it is difficult at the beginning of the season to obtain wins where some players simply have stronger cards.

At all leagues except for diamond and champion the monsters and summoners are limited to a certain level. For silver it is level 5 for commons, 4 for rares, 3 for epics and 2 for legendary. What is often the hurdle toward easy of winning in silver is that majority of used summoners are rare and that limits summoners at level 4. Many monsters than when in excess of level 5 or more can not be used to its fullest potential when playing in Silver league.

The limitation in levels may not necessarily be a bad thing as it requires less resources to compete at lower leagues. However to move ahead to higher leagues the win rates quickly depreciate as often playing at silver league meant I had low to middle level cards. By the time I reach to gold which is near the end of the season I tend to not win battles as often. That is because at gold league the levels limits have been raised.