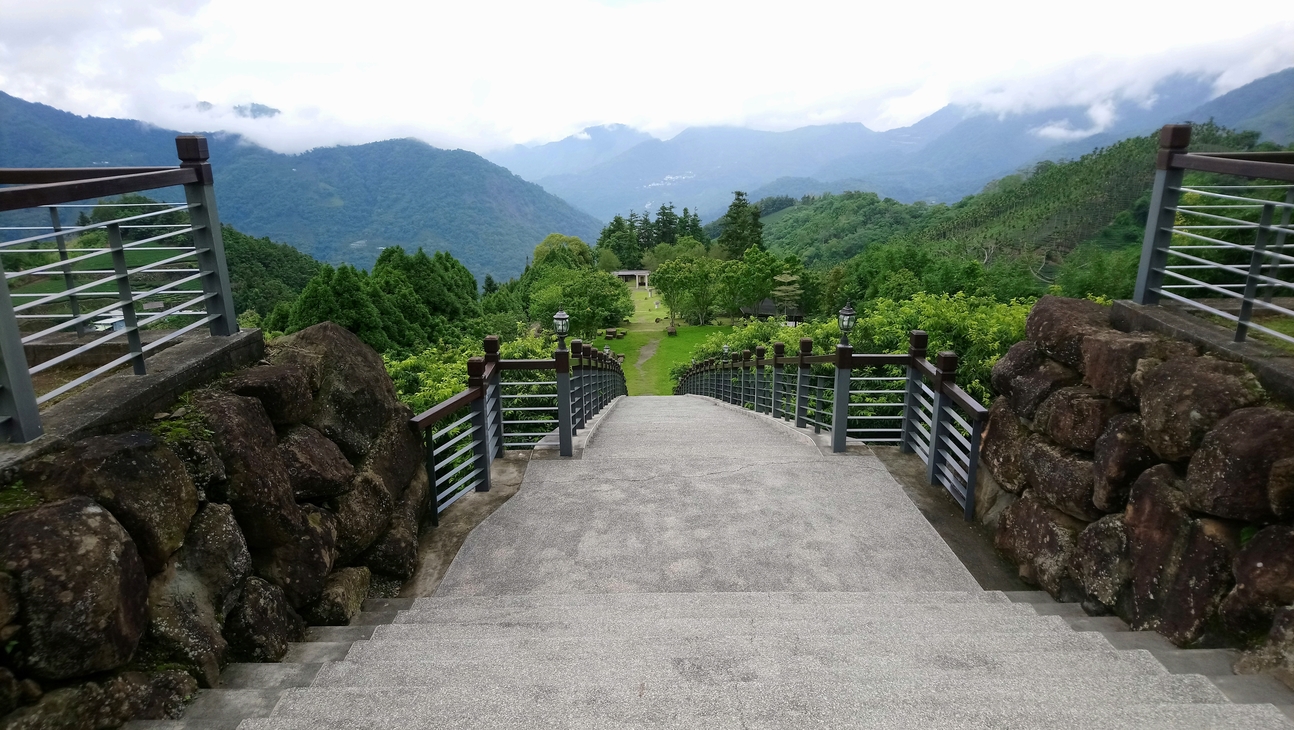 Hanshini - a weird place up in the mountains Our original plan was to go on a proper hike higher up in the moutains, but the weather was a bit unstable. So we decided to stop en route first to a place my friend had passed by on his previous hike. It is called Hanshini 寒溪呢. In Chinese, Han means cold, Shi means stream, and ni is a word you put at the end of the sentence which doesn't have any meaning . I think that's called a particle, but my grammar isn't exactly the best. Anyway, I have no idea what the name means as I didn't see any stream or river inside the park.

After driving for about half an hour up some tiny bendy mountain roads, we finally reached the car park by the main entrance. There was one other car there, and two guys at the entrance booth who welcomed us with open arms - and our entrance fee. NTD720 that's USD23/£18 for three adults and a car! I thought that was a bit steep for somewhere in the middle of nowhere. After paying our dues, we left the car park, and followed a steep hill up into the park. There wasn't anything to see along this path so I didn't take any photos. After about five minutes we got to some sort of stone circle structure. It reminded me of Stonehenge in England. They are positioned the way they are for a reason, which I wasn't aware of at the time. I only read up on it afterwards, and I'll explain in a minute. Hanshini is surrounded by mountains all around and there are three main ones in the background. They are visible in a clear day. The one on the right is Alishan, the most famous mountain in Taiwan. It's not the highest though, only 2216m. I couldn't see anything when I was here as it was quite cloudy due to the bad weather. The stone circle structure leads to the Tai Chi pagoda via a walkway. This is my favourite part of the entire park. The walkway has a very slight convex and it feels a long walk, but in reality it's only about a minute or so. During the sakura season, white sakura flowers bloom on both sides of the walkway and apparently the scene is really stunning. You can see this on the entrance ticket above. Sadly I was a couple of months too late for that. It was a very pleasant stroll and when I got to the top I looked back. The view was absolutely breathtaking. PRAYING AT THE TOP OF THE MOUNTAINS

I didn't take a good look at the Tai Chi pagoda as I'm not really into Taoism and I thought it was kind of odd to erect a religious structure in the middle of the mountain. They even had instructions on how to pray. You walk up towards the pagoda solemnly, bow your head slightly with you hands in a praying position. Then you walk clockwise around it three times. That is suppose to bring good luck to you and your friends. My friend walked anti clockwise by mistake, I guess luck won't be coming our way now. There wasn't much to do around the Tai Chi pagoda as the praying only took one minute. The view around was much more rewarding, and had it not been for the potential mosquitoes, I might have stayed a bit longer.

Next was the cafe a bit further down the mountain. Again, the walk from the pagoda to the cafe wasn't terribly exicting and it started to rain by now. I hurried carefully along the slippery path and arrived at a pond outside the cafe. By the way, this building isn't the cafe, I'm not sure what it is. This is the patio of the cafe, there's an indoor seating area and in total sits 120. Today there were three of us, and five staff, and we weren't plan on eating here. They view, was however quite spectacular again. THIS WEIRD PLACE UP IN THE MOUNTAINS

The staff were very friendly and chatty, maybe because they had nothing else to do and what happy to have some outsiders to chat to. They told us this used to be a private meditation and retreat centre, and it opened it up to the public last year. It seems some pilgrams discovered this spot some thirty years ago and believe there was some sacred power to it. I'm quite sceptical about new age beliefs, but in a way I can understand why the pilgrims thought this is a sacred place as it is extremely tranquil. Over the years, the pilgrims developed the retreat center and expanded it to the scale today. And if these wasn't weird enough, in 2005 a Dutch scientist said that Taiwan has a very high amount of energy, even higher than Sedona of Arizona in the States. The concentration point of this energy in Taiwan, the power spot, is at none other than the range of mountains around Hanshini! As I mentioned before, I'm not into new age beliefs, so find it difficult to apprehend the concept of energy and sacred palces. That's why I think this is a weird place up in the mountains, but this is in no way meant as a disrespect to the pilgims or Hanshini. My last stop of the day was a little hike up a hill called Meng Shan 1166, 1166 is its height. On the way I passed through some bamboo forest, similar to the ones I often see when I go hiking. Only here it cost us NTD720/USD23/£18 whereas normally nature is free for all to enjoy. There is a 360 degree view at the top of Meng Shan, here's just one view. On the other side is a stand where visitors can write messages on their lucky charm and leave it here. It is said that the energy force at this higher level will enhance the chances of one's wishes to come true. You've probably gathered two things by now. One, I wasn't too keen to fork out quite a big sum to see nature when I normally hike through the mountains free of charge. And second, I'm not into new age beliefs, energy and sacred places.

Anyway, having spent an hour at Hanshini, do you think the energy (if any) has made any impact on me? ^_^