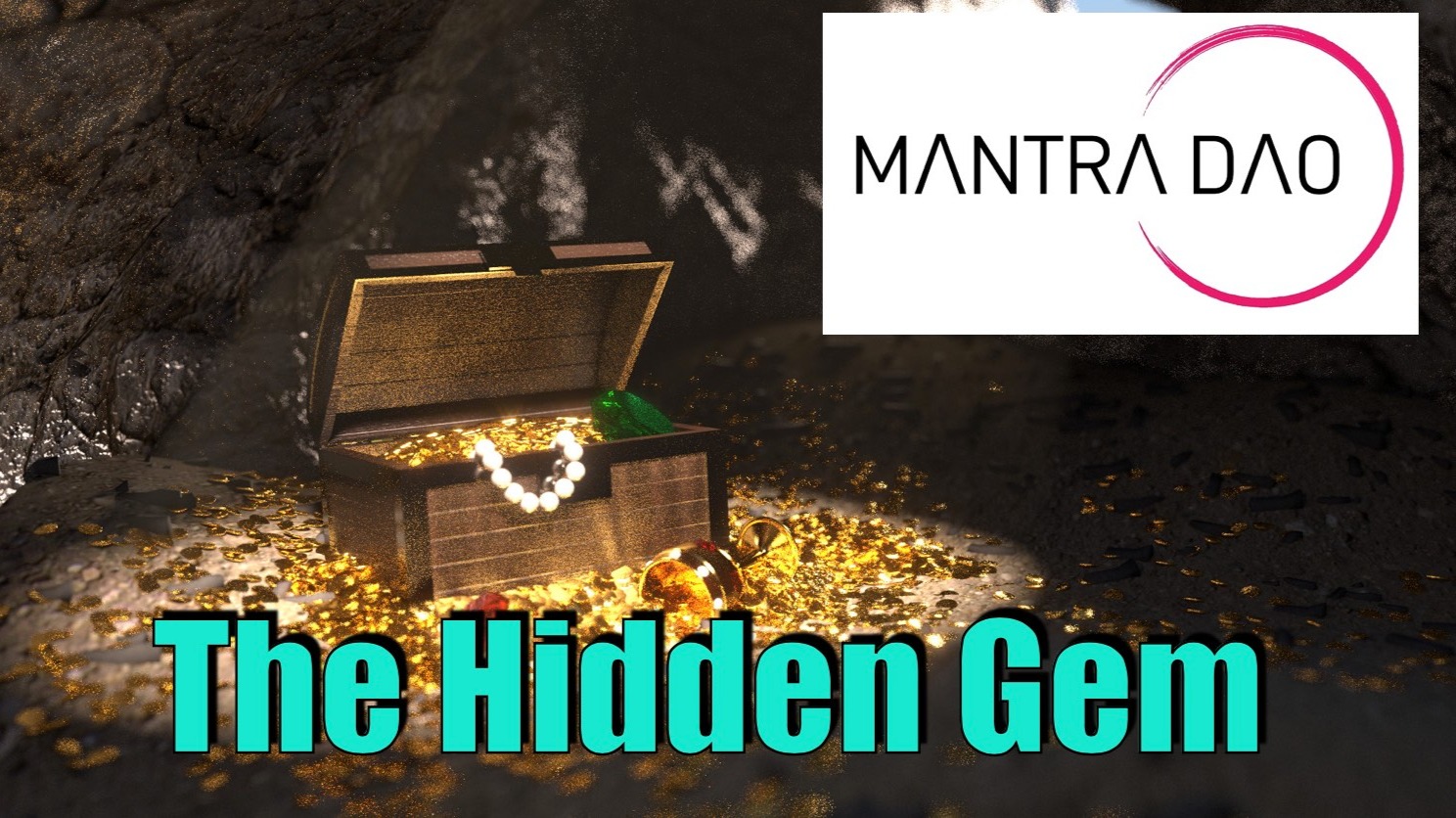 If you are anything like me, you are always looking for the next, new and upcoming project in the crypto space.  And in-fact one of my recent favorite projects is Polkadot which officially launched on exchanges just about a month ago and has already jumped up into the top 5 in terms of market cap.  Unfortunately with Polkadot already gaining such a high market cap it has made some people feel that they have already missed the boat with this coin and may have begun looking elsewhere.

But I have some good news for you.  Even though Polkadot just only recently launched, it already has a large and thriving Polkadot Ecosystem, and many of these coins are performing just as well or even better in terms of percentage gains.  There are many up and coming amazing projects in this ecosystem that have amazing potential, that have yet to go mainstream, and I would like to share one of those hyped projects with you today.

And that project is Mantra Dao!  (Also known as OM)

Actually I must be upfront with you, in some previous posts of mine, (top coins I'm focused on) I have actually listed Mantra Dao as one of my most hyped projects and there are many reasons for this.

1) DeFi in the Polkadot Ecosystem

7) Still Not Listed on some Major Exchanges

But before I talk about each of these categories, who exactly is behind Mantra Dao, and what are they trying to do!?

Not that you know exactly what Mantra Dao is, and what they are trying to do, let's get into the features or things about the Mantra Dao project that has me so excited. 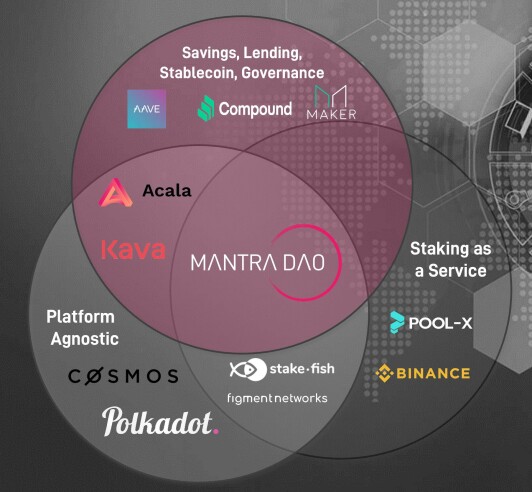 If you have been paying attention to the crypto market for the last few months, the buzz word that everyone has been talking about is DeFi (Decentralized Finance).  It has truly become the "Next Big Thing" in the cryptocurrency market. There are some people who are interested in DeFi for the technology that it brings.  They believe it has the power to change the world and financial markets forever.  Finally giving control to the individual, and no longer needing a 3rd party or bank to send transactions, borrow money, or even receive passive income interest for funds that you loan out to other people.  It truly is groundbreaking.

And then there are people who are in it for the financial gains.  During the last few DeFi hype months, we have seen countless projects increase by 2x, 10x, 100x, and even more than 1000x.  There have been life changing financial gains for many people who have invested in some of these projects.

As I have mentioned before already,  I'm a huge fan of the Polkadot ecosystem, because it has the ability to work interoperable with other blockchains.  This means it could work with Ethereum, Cosmos, Bitcoin and other blockchains as well.  Then when you take into account that Mantra Dao is the one of the very first DeFi projects on Polkadot, and then you will begin to see the potential that OM has.  In fact, I believe that OM has both of the characteristics that I just mentioned.  Groundbreaking technology, and also it is still so early for the project, which means there is possibly great potential for financial gains.

Along with DeFi, being able to stake your coins and earn a passive income has also been one of the hottest trends.  And I must admit, recently I have focused heavily on projects that do offer the ability to stake, as I have trying to increase my passive income.  Because it is so early with Mantra Dao, some places/exchanges are offering insanely great initial staking opportunities.  For example the exchange BitMax, is offering an incredible 88.88% annual interest rate.  In my opinion if you have any OM yourself, it would be a no-brainer decision stake up your coins and earn that incredible interest.  While that rate will not last forever, it still will be a great chance to make an income, especially compared to what banks are offering for interest rates recently. 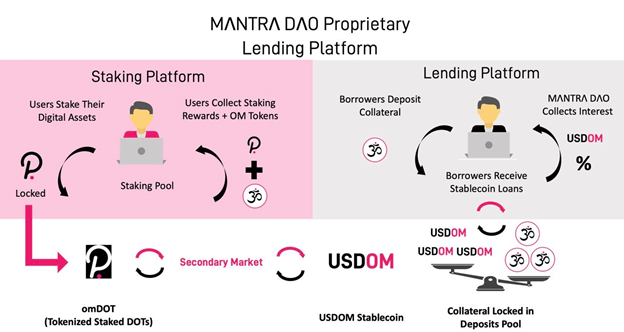 One of my favorite aspects of groundbreaking DeFi projects is the ability to borrow money without going to bank.  In fact, with Mantra Dao you will be able to receive a loan from the tips of your fingers; by using your smartphone or computer, and the funds can be received instantly.  No more going to a bank, no more trying to convince them how you will repay the loans, no more being rejected for petty reasons.  The world is becoming a better place.  All you need to do is to simply deposit some of your cryptocurrencies as collateral, and then you'll be able to receive a loan in stable coins.

Also you will have the ability to loan out your cryptocurrency to other people, which will allow you to again earn a passive income from the interest of those loans.  I'm all about earning an extra income, so this has me incredibly excited.

MANTRA DAO members holding OM tokens have full control over the ecosystem through systemic voting and governance rights.  Some people may not see the importance of this, but it is critically important.  How many times have we seen a cryptocurrency make a decision that we weren't a fan of.  Something that comes to mind is how recently there was a proposal from the developers of Bitcoin Cash to tax each and every block and use those funds for development costs.  Many BCH users were not happy about this, especially because they had no say in the matter, and this inner-chain battle has lead the developers to decide to do their own fork of the coin.

But with Mantra Dao, people who own OM will be able to vote on matters and have a say in the future of the project.  This is an incredible thing, and incentivizes people to own the coin. 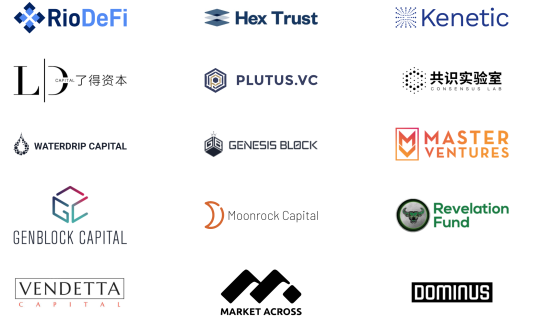 A project that has great ideas and potential is always a good thing, but to be honest, it doesn't mean anything unless those things come to fruition.  Meaning that they need to gain traction in the market place, and have many partners.  I'm very happy to say tell you that Mantra Dao has so many partnerships that I could even show them all in the picture about.  But beyond the normal partners in the Polkadot ecosystem, the thing that has me so bullish is that they having been landing partners with other chains as well.  Just recently it was announced that OM has become partners with KAVA, another chain that is trying to bring DeFi cross-chain.  It seems nearly every day that another partnership deal is announced and each time it does, it gives me more and more confidence in the OM project, and confidence that it will be around for a long time.

Because Mantra Dao is built on Rio Chain for Polkadot, its infrastructure efficiently connects organizations (banks, merchants, dApps) with users across multiple blockchains.  Which means in the future, Mantra Dao will be able to perform DeFi for not only Polkadot projects, but other chains as well.

I truly think that interoperability is the future in the crypto market place.  All you need to do is look at the problems that Ethereum is having right now.  If Ethereum was able to offload many of its transactions to other chains this could be a huge help to ETH and the general market as a whole.  This is a key feature of OM and DOT that many people should be more attention to in my opinion.

7) Still Not Listed on Many Exchanges

Another thing that has me incredibly bullish for the future price of Mantra Dao is that it is still so incredibly early on in this project's life.  Having launched just about a month ago, it still isn't listed on many of the world's largest exchanges.  While it is continuing to be added to larger exchanges such as OKEX, Poloniex and others, it still hasn't been listed on some of the larger exchanges that really bump up the price when listed there.  The exchanges that come to mind are Binance, Coinbase and others.  Also when you take into account that for it being a Polkadot ecosystem chain, the market cap is still relatively small when compared to others.  Coming in currently at around a market cap of $24,000,000 and ranked at #247 on Coingecko, there is incredible potential for Mantra Dao to rise up.  Of course this is all my opinion and not financial advice, but everything above has me very bullish.

So these are some of the things that I really love and had me so excited about the Mantra Dao project.  As you can see there is incredible potential here, and I can't wait to see how the project continues to grow from here on out.

So how about you?  What do you like about Mantra Dao? And will you be adding some OM to your portfolio?