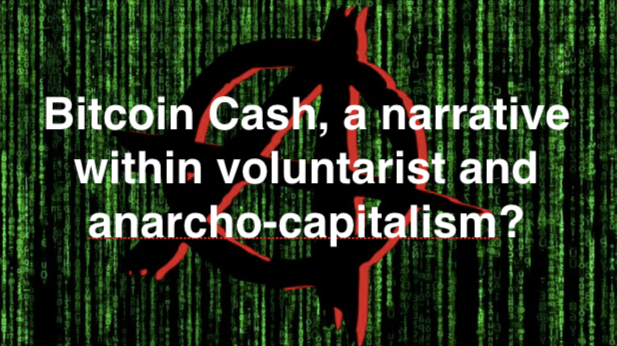 Bitcoin Cash, a narrative within voluntarist and anarcho-capitalism? 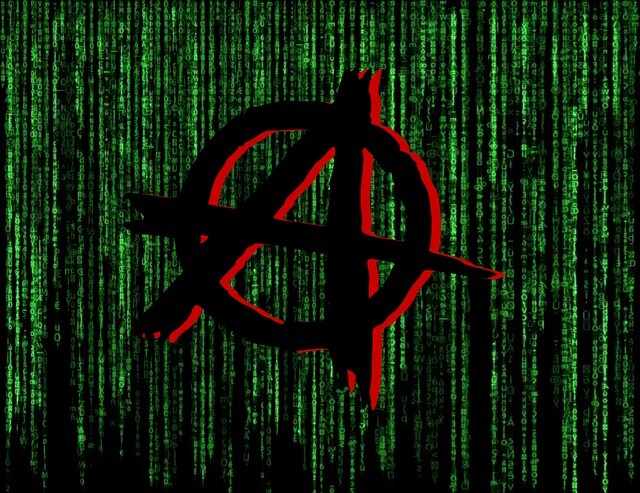 A crypto ramble on Bitcoin Cash

The narrative about freedom is at the genesis of modern socio-economic thought and has been evolving over the last three hundred years. Although, I do not remember studying voluntarist and anarcho-capitalism during my university academic training.

If you do not know these concepts you can watch the following summary video Voluntarism and Anarchy || Discussing Polycentrism.

These themes had a lot of resonance in academic circles when I was still enjoying my early adolescence. So I don't understand why did not include in the curriculum. Well, yes, I do understand now.

The adjective libertarian is in fashion. I hear it almost daily from the authors that I usually see and read on social media. By the way, they are careful in the speech to avoid censorship by their administrators; A violation of freedom of expression.

You will say, "Stop beating around the bush, and get to the point."

I understand the seduction of the current trend, which induces you to try to cover as much information as possible as quickly as possible. People ignore the biological fact that human beings are designed with cognitive limits to understand and handle one threshold of issues at a time.

So be patient, and let me develop concisely the ideas I want to raise with you. While we have unique capabilities, we are not machines with artificial intelligence, thank God.

I studied organizations and social theory at a Jesuit university. I admit that back then, I was dazzled by the quality of the system and curriculum. The teachers, intelligent people, imparted their best in each class efficiently.

Something caught my attention at the Catholic University. The professors' speeches did not touch on the transversal of knowledge, the assumptions of Jewish Christian principles.

Perhaps, it was because of the specificity of the postgraduate course I studied: Organizational Development, closely linked to the tradition of the Fráncfourt school and the Tavistock Institute.

Curious. A Christian university with a curriculum designed by atheist intellectuals.

In this sense, I think you'll see where I want to go. The world system of elites selects and indoctrinates the most enlightened minds in secular universities and even with the religious rectory to prevent people from threatening its stability.

Anarchist theories, it is understood, those whose central objective is social freedom and the abolition of the State as a regulator of socio-economic activity, do not be sponsored, even though they arise within it.

It is clear to me the indoctrination that I received to accept the central idea and objective of the elites; convergence towards globalism as a political system.

I am telling you that the most respected politicians, sociologists, economists in today's society, however intelligent they may be, work, consciously or unconsciously, to perpetuate those who dominate the system.

So do not expect in the mainstream open support for cryptocurrencies, and especially Bitcoin Cash. When the narrative changes, it will be because they, the elites, have twisted development in their favor or have been defeated.

The world of Bitcoin Cash. Does Utopia or Dystopia?

The term Utopia, created by Thomas More, an English Renaissance religious who wrote a work in which he imagined an ideal society, where everyone sharing goods and services equally and are happy in a political system to the Platonic ideal. A paradise on Earth.

It sounds good, but something smells very bad. I guess you figured it out already. Collective property is a clear indication of the ideal of communism. Although no project has achieved the end of the communist ideal, the essays have been catastrophic for the people. Death and economic ruin.

On the other hand, modern dystopias, such as the famous "Hunger Games" movie saga, do not predict a desirable future. I believe they box us in by fear so that we accept with the least resistance the plan they have devised for the world to come.

Those who defend the system when they hear the libertarian narrative, the label within conspiracy theories. They want to discredit the arguments and torpedo any initiative of dissident groups seeking to free themselves from the yoke.

In this sense, the promoters of Bitcoin try to transform today's society through the convergence of the mathematics behind the cryptography that runs on blockchain technology. A bold step that encounters obstacles by attacking the core that supports the system.

You will say, "so much detour to say that bitcoin is an anti-system medium."

Okay, yes. You are right, but I hope you understand why to use Neo-language in the style of Orwells in narrative and its effect on the crypto market. Regardless of where it comes from, call each other left or right; they are wings of the same bird.

In addition, there will be people who will find here a new reading, a snack that seeks to stimulate them to start their investigations.

So you may wonder, is Bitcoin a part of a utopia or a dystopia?

Before answering the question, it is necessary to discern which Bitcoin. Currently, Bitcoin Core (BTC) dominates the market and is very popular with traditional investors.

Instead, Bitcoin Cash (BCH) is vastly undervalued and receives constant attacks in the media seeking to ridicule and downplay it. However, adoption by merchants continues to grow steadily.

I see in these the result of the use of the neo-language. I associate it with Germany divided by the Berlin Wall in times of the cold war. A society divided by the then superpowers, the USA and the extinct USSR. The result, the Federal Republic of Germany and the German Democratic Republic.

Of course, the comparison is something drawn by the hair, since for me, both political systems, deep down, have the same objectives; they differ from the methods of domination, and in the management of capital.

What is remarkable in the analogy is in the fact that although both cryptos abrogate the name of Bitcoin, only one embodies the libertarian ideal.

In this sense, I do not doubt that Bitcoin Cash is the legitimate heir to the original vision of Satoshi Nakamoto's project. The one with the potential to liberate the oppressed. If you want to see my arguments, you can click on the following link, No matter how old you are, why should you invest in Bitcoin Cash in 2021?

Bitcoin Cash is not an unattainable utopia, nor is it a dystopia to avoid

BCH is the option with the potential, among those competing in its gender, to change society. And consequently, a threat to the world government project under the narrative of inclusive capitalism and the common good. A New Disguise for Tech-Powered Communism.

The promoters of Bitcoin Cash want to revolutionize the world towards fairer relationships. The replacement of the statesman model by a voluntarist anarcho-capitalist model.

History records how totalitarian it finishes any government. In the end, the interests of a few always prevail. They subjugate the majority by force or deception.

Also, by analyzing the speeches of prominent figures in the Bitcoin Cash community, such as @RogerVer and @MarcDeMesel, you will discover why they invest in BCH.

It is not only a question of profit. Although it is a smart bet, there are also associated principles of voluntarism.

Perhaps the world where socio-economic relationships flow over a Bitcoin Cash ecosystem will detract from the Hobbesian Leviathan and transfer it to the people.

Perhaps new associations will emerge based on renewed morals and ethics.

In reviewing the literature for this essay-type article, and in my own experience, I appreciated a common motivation among the perspectives; An eagerness to leave God out of the equation.

I am a believer who professes an intelligent faith, that is, a faith dissociated from religious organizations and grounded in the denoted and connoted treasures of inspired scripture. I think that any human action without the help of God is doomed to failure.

You don't have to agree with me. You are free to believe whatever you want. Only in my wandering through life, the collated evidence is more valid than that presented by the atheists, whom I studied at the Catholic university.

By the way, I no longer feel Catholic. An ironic situation. It reveals the threads of those who dominate the world.

Welcome to the world of Bitcoin Cash and the new paradigm behind it.

An original article by @Jnavedan

Who I am? Someone like you, passionate about sharing ideas and experiences that unite us along the way.