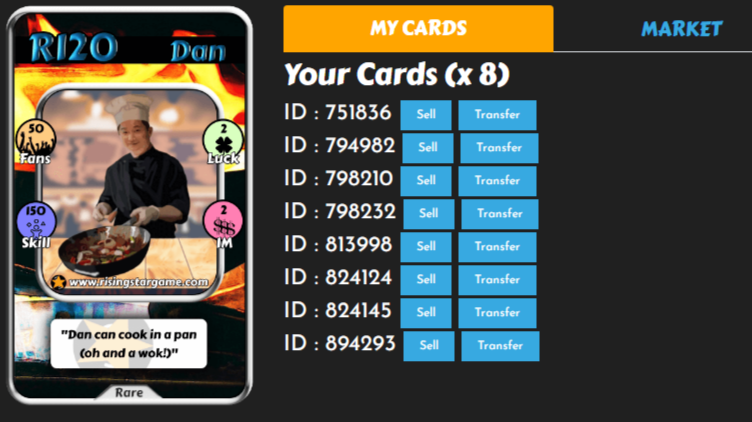 Here is my weekly status and giveaway. It was a busy week but I think I was able to focus more on the game. There were some technical issues with the game so I couldn't place a long running mission before I went to sleep. The issues seems to be resolved now so I don't think there should be anymore issues for now.

It's just a musician this week that I did not give away in the past. The giveaway item is R120 Dan and it has 50 fans, 150 skill, 2 luck and 2 income modifier. All musicians help quite a bit and it will definitely help the people starting unlock more missions. This musician also has more skills than fans so it will help if you have too much ego.

In order to participate:

This time if you do not leave your username, I will not include you in the draw. I want to reward the people who follow the rules. I transferred the Carlito below. Overall I am making progress on my fans and I am getting closer to the 100k fan mark. There are some drunk fans but I should be reaching it in a month or so at worst. I am slowly gathering more starbits for the next seasonal mission.

I opened my packs quite late but I did get an epic card. It's my 3rd Low Rider card so maybe I should try to trade it for an epic vehicle that I don't have. Here are the blended cards that I managed to make after last week's post. I think giving up duplicate cards for a unique card is better for the rankings. While I was checking the cards, I found a few unique cards that I did not have. They were relatively cheap so maybe I should of bought some more. I traded away a duplicate E42 Electric Violin for this card and I think it was a great move. They give the same amount of luck and I did not have one of these cards yet so it adds to my unique cards.

Using the discord bot, I got my stats. My rank is up from last week and my time played is better too. It could of been better but the server issues stopped me from running a 5 hour mission while I was asleep. It probably has affected other people as well so I don't think it affects my ranking too much.

If you want to join Rising star, feel free to use my referral link.

I think the tips are something every new player should know about. It will help people progress in the game and it hasn't really been shared since surya1adiga stopped his giveaways.