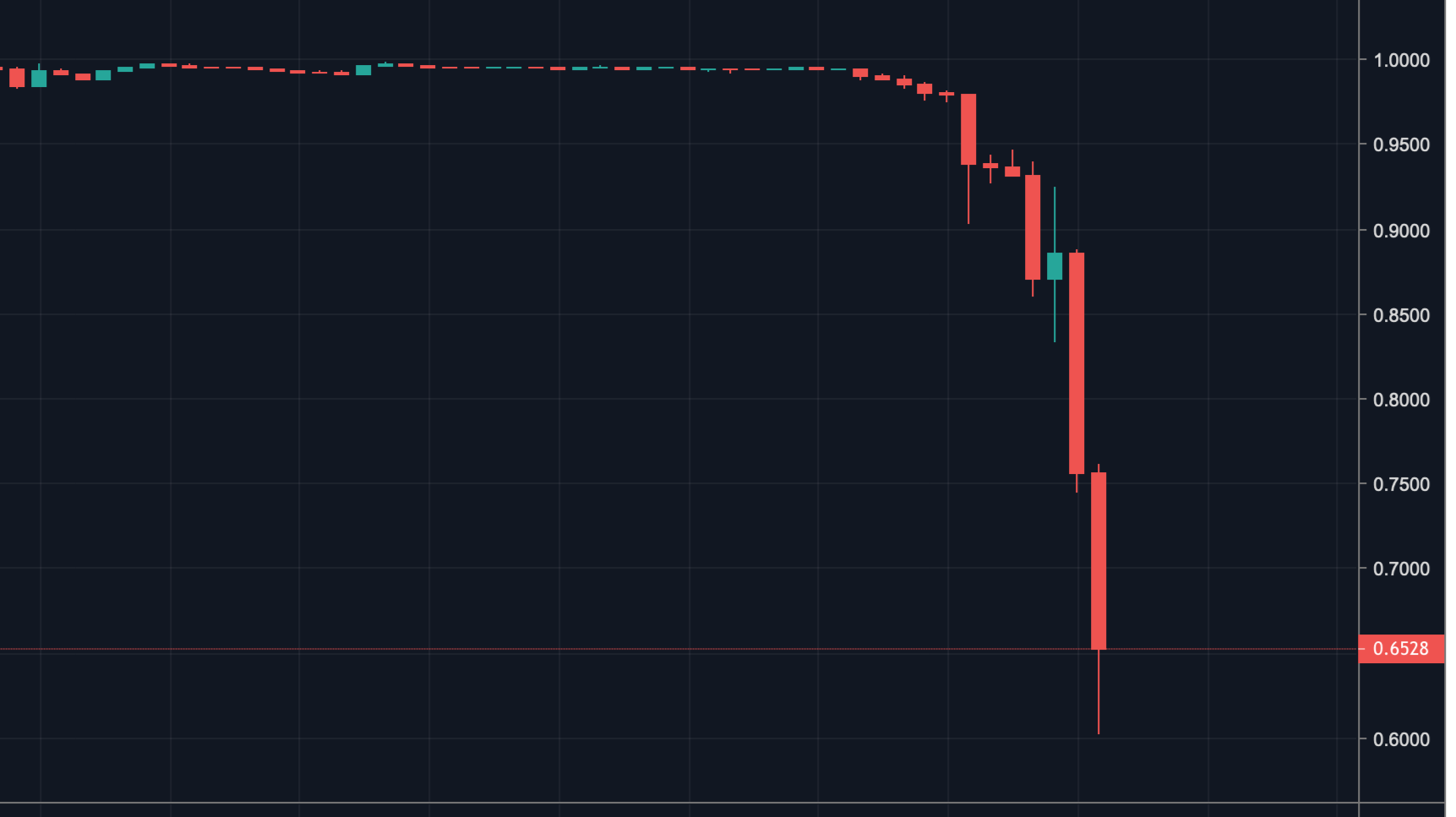 If the realized risks of Terra's death spiral yesterday wasn't a rough reminder, please remember that the whole of Defi/Crypto is risky, and please note that this is NOT financial advice and for educational (and hopefully entertainment) purposes only.

The whole Terra ecosystem got pretty battered over the past few days with a historic collapse in UST's peg, which systematically also brought down LUNA to YTD lows as well too. However if you kept up with news, the depegging really started over the weekend off-chain when huge dumps of UST occurred in the curve pool, creating massive pool imbalances and subsequently creating market differences in UST's price action. This, in addition to a select few whale wallets that all pulled out of Anchor at the same time definitely spooked the Terra market and led to around 4-5 billion dollars worth of value to be taken out of Anchor overnight. In what's known as a "death spiral," people en masse lost extreme confidence in UST, and essentially there was humongous pressure to sell UST, driving the peg even lower which also consequently put collateral sell pressure for people to get rid of LUNA as well. And then finally with the price of LUNA tanking, 100's of millions of dollars worth of LUNA were liquidated, which further increased sell-offs and loss of confidence driving the market down even further. DoKwon and the LFG has in recent months bought a whole bunch of BTC to add to its reserves to help back UST, but considering that TVL for Anchor dropped from over 20 billion to 8.5 billion (at the time of writing this), it's not a surprise that a few billion in BTC reserves couldn't backstop the massive slide of UST to go down towards the $0.60 ranges.

If you were expecting to read more about the depegging death spiral itself, my purposes for this article wasn't to talk about the mechanics of the collapse, nor the fundamental issues of what went wrong here, so if you want more information about about the depegging, I highly recommend that you try to get your news from official sources, because as I'll touch upon a little bit later, twitter has a huge tendency to stir up a lot of FUD.

As I stayed up late last night tracking a lot of this action, I came up with a lot of observations last night, big and small:

1) The Cryptocurrency market in general is horribly inefficient  - Although they're closer together now, the rates for UST/LUNA were and still are significantly different on multiple platforms. If I go on Uniswap right now the peg is at about $0.80, if I go on OkCoin it's $0.91, or if I go on-chain to White Whale it's about $0.93. 12 hours ago, these differences were even greater.--on-chain prices were still pegged around 1USD to 1UST, while off-chain they were going up and down anywhere from $0.60-something cents all the way back up to around $0.95 cents.

I know that normally arbitraging has its functional purposes for an open market to help even out prices (and for the most part I would totally agree with this), but last night, I would not. With network congestions, liquidity pools being frozen, and simple service shutdowns--many late-to-the-game retail investors were completely denied from either being able to deleverage their positions so they could stop themselves being liquidated, or at the very least be able to convert their assets off Terra to something less volatile like USDC. So without many people being able to move their funds, the price differentials only added to the uncertainty and panic that people were displaying on twitter.

2) Speaking of Twitter, I really don't think the come-at-me-bro-mentality is really good for a project in the long run, and here, I'm specifically talking about DoKwon, the figurehead for the Terra ecosystem. Now don't get me wrong, from what I've read I think the guy is a brilliant visionary who has created an incredible ecosystem. But I think talking down about other projects or crypto-endeavors is bad for not only those projects themselves, but for the whole crypto-economy. Take the following tweets for example:

Now to be completely fair, I believe DoKwon IS a huge proponent and supporter of the crypto-economy and I know it's not a fair take for me to be picking out random tweets and then to present them myopically. However, as the single figurehead for one of the the biggest TVL blockchains out there, whether he likes it or not he is a public figure and people will read (sometimes erroneously) into what he says, whether it was intentionally said in jest or not. That being said, I could totally see how this might paint a target on LUNA/Terra's back which is what I believe might be why we saw this collapse this week. We saw a similar (but not as big) collapse of Daniele Sesta and the Frog Nation, which caused many of the Frog Army and other non-assuming retail investors to lose a ton of money. Dani, like DoKwon, was known to have the come-at-me-bro kind of attitude and had similar troubles:

Aside from the smack-tacking, I was however really impressed by the #LUNAtics community. Several people were opening up their DMs to lend support to others that were losing money. That, and I read countless tweets and messages from community members that were really caring for one another. In times of stress, many were reaching out to one another with their sympathies and support.

3) And speaking of Dani, although this was similar to the bank run that happened on MIM, I think the bank run on UST was that times 10. MIM, or Magic Internet Money, is a stable coin that keeps its peg from overcollateralization through Abracadabra.money, also underwent a stress test back during the Sifu scandal earlier this year. However unlike MIMs, the UST depeg broke through the $0.98 cent range and hit much lower levels, thus making things more catastrophic. The MIMs bank run like the UST bank run shows how blockchains and protocols and come so symbiotically intertwined. MIMs was by third degree associated with a scandal that occurred on Time Wonderland, whereas LFG's selloff of BTC caused massive FUD throughout the entire cryptospace.

3) If the rumors about Citadel are true, a war on TradFi might have begun, if it hasn't started already. As a follow-up from the "come-at-me-bro" attitude, when DoKwon is publicly tweeting out when and how much BTC he's buying, it creates a game plan for potential actors that have enough capital to manipulate the market and short the sh!t out of you, which as it appears is what happened here. Essentially the rumor was that someone from Citadel orchestrated an attack which involved shorting the BTC that DoKwon purchased:

If this isn't painting a target on your back I don't know what is, but TradFi certainly has the motive and the capital to do so.

4) White Whale Protocol is a beast. If you're unfamiliar with White Whale, you can read about it in my previous post, essentially it has an arbitrage vault which seeks to auto-capitalize on different arbitraging opportunities when there's UST price deviations on different protocols.  So full disclaimer, I could be completely wrong, but I do have personal faith that UST will eventually restore its peg and for that reason, I did leave a bag of UST in White Whale's arb vault. And during this time of extreme peg volatility, I've seen White Whale spit out arbitraging opportunities every few minutes since last weekend. Did it stay true to it's "Keep the Peg. Be the Whale" motto? Obviously not. But nonetheless, I have been extremely impressed by its functionality and will most likely continue to keep a bag there as long as the arb vault continues to take advantage of the price differentials. 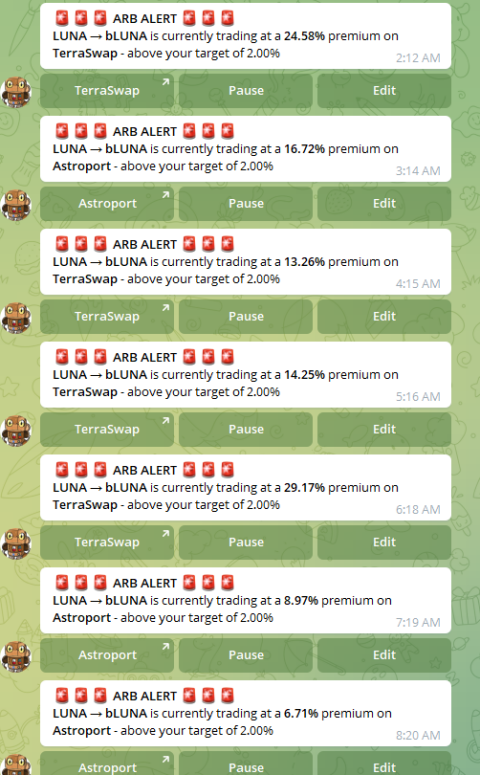 I myself arbitraged when there was about a 9% percent premium, but had I been more patience (and not gotten any sleep), I could have gotten almost 30%. Now was this completely foolish given the price action on LUNA? Probably. But then again, I'm still banking on the fact that the ecosystem will still recover, which leads me to my next observation.

6) There's a lot of degens out there. Yes, there was a huge liquidity drain from anchor and yes, tons of people lost hundreds of millions of dollars through liquidations, but despite all of this, at the time of writing there is still more than 8 and a half billion dollars in TVL in anchor, including more than 2 billion put up in collateral. This is a far shot away from the 20 billion in TVL last week, but I would argue that there's still a lot of life left in the system. On top of that, besides people just trying to arbitrage, there was (and continues to be) a ton of action for people trying to short and long just about everything.

In this same vein, it was interesting to see how a lot of content creators (whether on twitter, Youtube, or any other platform) talk about this. Prior to this fiasco, perhaps every content creator (myself included) that I've ever followed mentioned all the benefits of Anchor Protocol and how to make money off the Terra ecosystem, but there were many that either felt silent, or felt personally responsible for having their followers go into something that has obviously failed and potentially put life savings at risk. I myself, try to identify (when I can) the potential risks for any project that I blog about, but let's be honest here--when you see crazy high yields and the possibility to get rich quick, it can bring out the degen in all of us. For this very reason, I intentionally try not to blog about the super risky degen projects that I am personally involved with, because I just don't feel comfortable with the idea of someone taking that kind of risk on my behalf. That being said, I, like many other content creators knew that this death spiral possibility was out there, but I think we can all agree that this happened lightning fast and took most people by complete surprise.

There were a lot of lessons learned from the past few days, and I hope that these experiences will all help us go into whatever we invest into next with our eyes wide open. And will Terra recover? I certainly hope so, but at this point its still hard to say for certain as during the time I took to write this article, the price of UST has fluctuated +/- 5%. So once again, please do your own research and remain critical of everything that comes at you. I believe that it's certainly acceptable to take risks at times, but please try to fully understand what those risks are, and if you accept the risks, be willing to accept what the consequences may be.

Once again, thanks for reading. Take the time to spend with loved ones, and remember that the markets care for not one person, and will continue to do what they do despite what we might think.