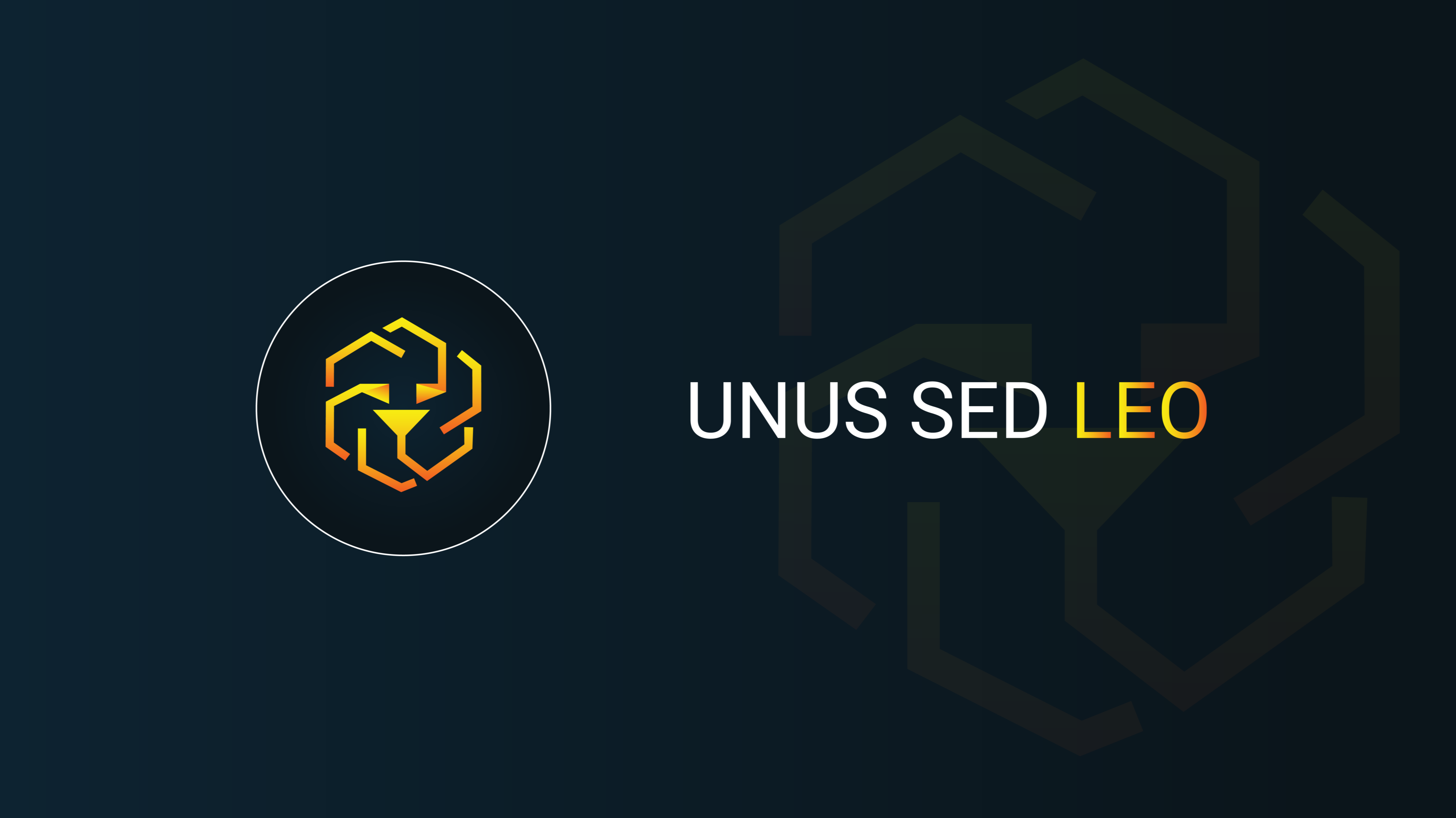 Is Unus Sed Leo (LEO) a Good Investment? In-depth Analysis and Near to Longer-Term Expectations

2019 has been a transitional year for cryptocurrency, so to speak. Bitcoin’s still up about 127 % from last year, where the bottom was at $3,100. It’s nothing like how it was between 2017 and 2018 though - that was a breakout year for cryptocurrencies as Bitcoin really became a household name. Institutional investors started seeing value in cryptocurrencies. Enterprises began looking into both private and public networks for such uses as digital identity management, logistics and remittance payments.

Unlike the years before, 2019 has been more research and development oriented - many new technologies, implementations and applications have been developed and we are seeing the first signs of ecosystem growth for decentralized finance (DeFi) space and projects like the Basic Attention Token (BAT).

Sidechains, enterprise platforms, institutional investment, lightning network and interoperability have all been major talking points this year, but the token I am going to highlight today has to do with another big trend of 2019: exchange tokens.

The most famous of these is Binance Coin (BNB), which has seen extraordinary growth this year. Tied into Binance’s services, the token has become one of the market’s best performing assets in 2019. The worth of exchange tokens is strongly associated with its issuing exchange, and how good an exchange it is. Multiple other exchanges have also launched their own tokens, designed with similar intentions.

iFinex, the company behind liquidity-high exchange Bitfinex and stablecoin Tether, has launched an exchange token called Unus Sed Leo (LEO) that is tied to Bitfinex. I’ll be looking at LEO and whether it’s a good investment in a space that is packed with competition.

What is Unus Sed Leo (LEO)? 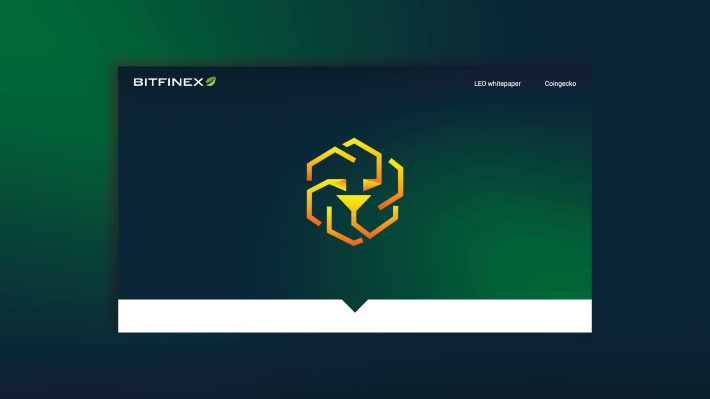 LEO is an exchange token through and through. Exchange tokens are basically tokens native to the platform that offer a range of advantages in order to incentivize you to use the platform. For example,you might get a discount on trading fees or when investing in new projects launched on the platform’s chain. Or you might get airdrops. There could also be passive income benefits.

The token gets a name from a story from Aesop’s Fables. According to the team, the ethos of the effort  is that of quality, not quantity, and independence. The latter the team says manifests in the form of the fact that third party solutions will be limited.

There seem to have been a few motivation as to why iFinex launched this token. One reason is because the concept of an exchange token could further enhance the platform and provide additional value to customers. The other may be because the team wanted to rebuild the Bitfinex coffers and reputation, which had taken a hit following a long period of legal issues.

The team created 1 billion of these tokens via a closed Initial Exchange Offering (IEO) that was organized in May 2019. These tokens were sold for up to $1 billion USDT.

It’s worth reiterating iFinex’s decision to recover the $850 million of the exchange’s payment processor, Crypto Capital, that was seized by authorities. LEO was created to help with that financial void and Bitfinex will be repurchasing and burning tokens, driving the price up, if it manages to recover the funds. LEO tokens will be bought from the market at amounts equal to 27% of consolidated gross revenues regularly.

While Tether may have a less than stellar reputation in the market, LEO seems to be doing rather well, having quickly jumped into the top 15 cryptocurrencies by market capitalization. The token also has a fair bit of liquidity, with the OKEx exchange listing the token in June.

What are the Benefits of LEO?

The benefits of LEO are similar to those of other exchange tokens. Users received discounted trades, deposit and withdrawals; access to airdrops and competitions; discounts on investing in ICO projects; voting rights on the platform; and a share in exchange profits through dividends.

For example, taker trading fees for crypto to crypto pairs are reduced by 15% for LEO users. They also receive a 25% reduction in withdrawal and deposit fees. iFinex also has several other platforms and upcoming products which will also work with LEO.

iFinex and Bitfinex have had more than a few controversies in the past, with most of them having to do with the Tether (USDT) stablecoin. The doubt surrounding Tether’s reserves and whether it is capable of backing all of the USDT tokens in circulation has not quite been put to rest. A few satisfactory reports put out by Bitfinex has done little to calm investors down, though Tether itself remains quite popular in terms of use.

The team did not want to encounter the same problem with Unus Sed Leo, which is why they set up the Unus Sed Leo Transparency Initiative to be as clear as possible with their intentions, in addition to the burning mechanism. This Transparency Initiative can be directly accessed from the Bitfinex dashboard and gives user insight into the token burning and how platform fees are collected.

The Transparency Initiative set by Bitfinex was a response to those accusations.  It shows how much LEO was burned every day over the week as well as the transaction IDs. Its nothing spectacular, but a much needed move.

Unfortunately, both the Transparency Initiative and the LEO whitepaper does seem to give the impression that it has quickly been cobbled together. Given the troubled past of Bitfinex, it would have been much more to see a professional and thorough presentation of transparency.

The issues surrounding iFinex does not seem to have deterred it from trying to continue to make a mark on the market, but there is no doubt that it is weighing it down.

It’s not difficult to see that the success and use of exchange tokens is mirrored by the success and use of the issuing exchange. If you have more unique features for your users, or offer better fees, than you’ll see more users hop onto your platform. This is why Binance Coin (BNB) is so successful: Binance has built a diverse set of features that include a decentralized exchange (DEX), a blockchain and an ICO launch platform, and users are interested to reap the monetary benefits of these features.

Is it possible to guess how well Bitfinex will do? That is just not possible, but it definitely the case that Bitfinex has a somewhat upward struggle to recoup its losses and repair its reputation. Despite the trouble it has gone through, it has been doing rather well. It may not see the greatest trading volume among all exchanges, but it does receive a respectable volume of over $100 million in a 24 hour period. Binance, for comparison, has nearly $1 billion in 24 hour trading volume. 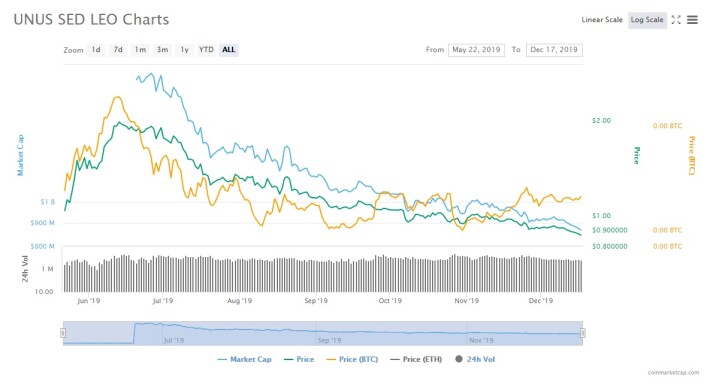 Unus Sed Leo has quickly risen up the rankings to reach the top 15 on Coinmarketcap. The price currently sits at $0.87, having reached as high as $1.97. The token has a market cap of just under $900 million.

That may not be as great as how Binance has grown (which is really what inspired other exchanges to launch their own tokens). Binancec grew from $0.11 to $40 from August 2017 to June 2019. Can LEO attain similar growth patterns?

That remains to be seen and is largely dependent on how well iFinex and Bitfinex does.

So is the Unus Sed Leo (LEO) token a good investment? It’s certainly a good one if you’re a user of the exchange. In fact, it’s probably best to invest in the exchange token of your primary exchange, if it has one.

Exchange tokens are definitely a good kind of token to invest in; Binance has proven that emphatically. Exchanges are only going to gain more clout in the industry as they expand and develop more features. There’s no reason to think that Binance will be the only exchange in the world 5 years from now. There will be a set of major exchanges operating in different jurisdictions which for whatever reasons are popular. It’s viable that all of these exchanges will have their own tokens and associated benefits.

Assuming that Bitfinex exists into the future without encountering some existential threat, then it is definitely possible that Bitfinex could hold great investment potential. There’s no guarantee for that, even with the Binance Coin (BNB). However, if you don’t use an exchange with such a token and you’d like to invest in an exchange token, then you’d probably want to choose Binance and BNB, as that has the best demonstrable record.

So then your decision to invest will be based on whether you think Bitfinex and iFinex ecosystem will grow, or whether you already hold an account on the former.