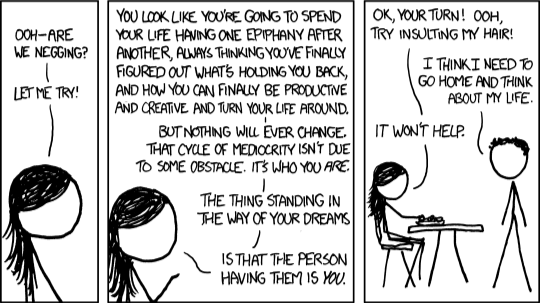 Today, I had a deep realisation about Incels (yet more content about Oog the Caveman)

In case you missed the thing about Oog the Caveman and his incel ways, here, have a link.

Today, I had a realisation. That is that Incels aren't actually interested in attracting women (especially not for fun sexy times). They're not even interested in interacting with other men (in general). They're only interested in remaining in their circle of fellow incels and willful ignorance. It's essentially the "only gay in the village" skit from Little Britain, but on a bigger scale. If it were otherwise, they'd make a concerted effort to drop that nonsense and learn another way (one that actually works at least some of the time).

Most middle-aged men are unhappy because they don't know how to interact with others, especially women. They believe they know how, but when they get shut down (especially by older women they were soliciting for sex), they assume the woman is bitter, angry and crazy, when really they just don't realise that nobody owes them sex and that they need to bring something to the table to form a meaningful relationship when they clearly can't. Work on yourself first, then come back.^ You may think you're hot shit, especially with a cringe-worthy profile description (some alpha male BS), but you've got a long way to go, kiddos. Hot tip: The attitude expressed in the below doesn't work (although, TBH, I don't think they/you care):

But really, I'm doing this for your benefit, hot, young women. Honestly, I am. It's out of altruism. Women who didn't chain themselves to being owned and exploited by a man when they were young and hot, despite having a longer life expectancy and a rewarding career, are really, really miserable. Honest.

You can trust me, young, hot women. I know far more about women than women do and why would I lie to you? Honestly, I have your best interests at heart.

* Of course, once I've got my dick wet, I'll probably change my mind.

^ "That cycle of mediocrity isn't going to change. It's who you are. The thing standing in the way of your dreams is that the person having them is you."

Oof! I feel like this applies to me in a very real/tangible way. I now feel despondent/demotivated, because that's how my life has gone for a long time and nothing I do to improve/be better changes that.