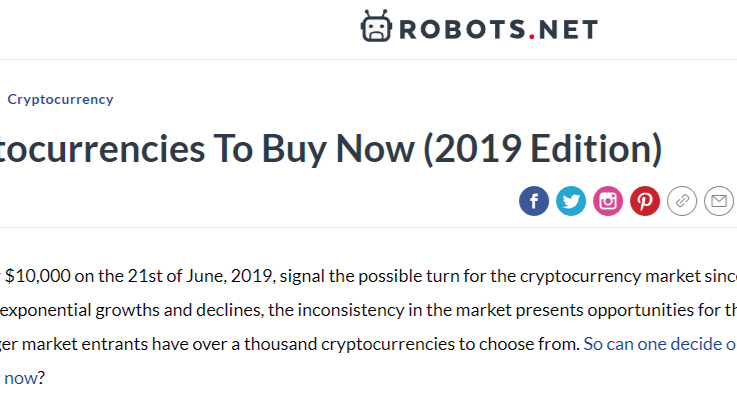 Steem continues to see good press as of late!

Robots.net recently put out a list of their Top 10 Cryptocurrencies to buy right now (2019 edition) and STEEM found its way inside the top 10.

It was listed at number 8 to be precise.

This isn't quite earth shattering news as I have never even heard of Robots.net before today, but it was nice to see STEEM mentioned never the less.

The ranking went as follows:

There are a couple interesting names on there and before you spit out your drink as it relates to USDT, it appears each token was chosen for the particular market it represents, for example USDT was their stable coin of choice.

Anyways, like I said, nothing earth shattering here, but it is nice to see STEEM getting a mention never the less.

More details on the rankings can be seen here:

Also, Steemit,Inc put out a press release announcing the recent changes for steem and steemit

The PR was picked up by several news organizations, such as yahoo finance:

The PR in its entirety can be seen below:

"AUSTIN, Texas, Sept. 19, 2019 /PRNewswire/ -- Steemit, Inc. (https://steemit.com) announced its most significant changes to Steem since it launched in 2016. The first addition is the SteemDAO which allows the blockchain to fund its own development by enabling anyone to submit proposals. Winning proposals receive funding in SBD (Steem's dollar-pegged asset) from the blockchain based entirely on the votes of stakeholders. Annual funding of the SteemDao are expected to be between one to two million dollars.

No other blockchain has distributed as many rewards (approximately $100,000,000) to content creators all over the world. Recently, quality content and engagement has declined on Steem which is why the "Economic Improvement Proposal" (EIP) was added to Steem via the last hardfork. The EIP ensures only high quality content is rewarded through the implementation of a convergent linear rewards curve. The EIP makes Steem the most advanced decentralized reward system in the world.

As significant as these changes are, Steemit engineers continue to work on the most anticipated projects to the blockchain with Smart Media Tokens (SMTs). Steemit Senior Blockchain Engineer, Michael Vandeberg, said of SMTs, "Almost every single core system that exists in Steem is being expanded to support SMTs. When SMTs launch they will be the world's most advanced turnkey solution for tokenizing web applications."

With the release of SMTs and Steem Communities (think "decentralized subreddits"), 2019 is shaping up to be the year that the Steem blockchain matures from a decentralized content platform, into a full-fledged blockchain protocol capable of powering applications that are impossible to run on so-called "smart contract" platforms.

"I am so proud of the amount of hard work our engineering team has put in over the last ten months. From solving blockchain scaling issues, massive improvements to the rewards system and launching the SteemDao, Steemit continues to lead all other blockchain projects in the industry," said Elizabeth Powell, Manager Director at Steemit.

## About Steemit, Inc.
Steemit, Inc. uses blockchain technology to develop cryptocurrencies that support, improve, and monetize social media sites and networks. It is the primary developers of the Steem blockchain and steemit.com, a top 5000 Alexa site. To learn more about Steemit, visit steemit.com and Steem at steem.com."

I am glad to see Steemit/Steem announcing these changes in PR form much more often than they used to.

The more steem and steemit stay in front of people, the better!