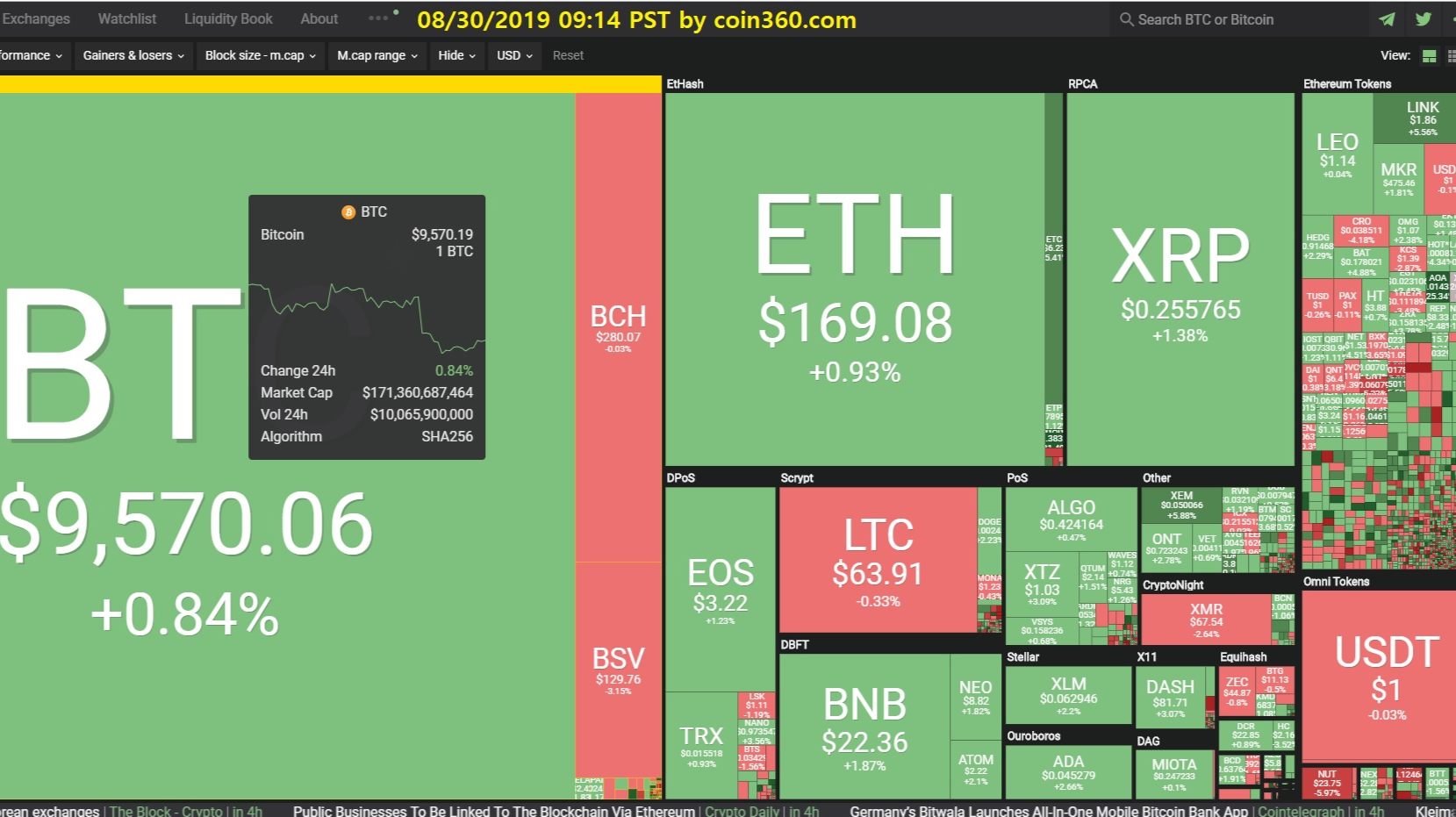 Markets had slid dramatically a day previously, dropping from $10,200 to hit a local low of just $9,350 hours later.

Bitcoin remains on track to test $9,000 after falling off a narrowing range earlier this week. The granddaddy of cryptocurrencies is on its way to post a third monthly loss in 2019 following a considerable drop throughout August. Bitcoin is teetering around $9,587 at the time of writing. BTC opened the trading on August 1 around $ 10,077.44 representing a 4.8% loss.

Trading veteran Jim Wyckoff, who has more than 30 years of working with traditional markets, believes bulls could feel more pain in the short-term.
Wyckoff points out, that bears have managed to establish a price downtrend on the 1-day price chart. At this point, sideways trading remains the most plausible scenario when both camps don’t move the needle.

The Chicago Mercantile Exchange (CME) is currently registering an average daily trading volume of $370 million in Bitcoin futures. This is according to the Managing Director of the CME Group, Tim McCourt. This represents an increase of 132% compared to the same period last year.

Major economic oppression and manipulation by governments and central banks is what drove a band of cypherpunks to create Bitcoin a decade ago. That financial storm is worsening which has generated an even greater need for a decentralized form of money. As ex-congressman Ron Paul points out, the FED should not exist.

Following this major price plunge, analysts are now predicting that BTC might be on its way to a major 20%-30% price dip which can cause the price to perambulate around $7.5k region in the next few days. However, this drastic price fall, according to popular BTC traders, is healthy and would initiate the next bull season.

When crypto markets fall hard in a few hours panic usually sets in. A torrent of sell orders usually floods the market until Bitcoin price finds support. This is exactly what happened yesterday, but zooming out will provide an opportunity to breathe as not all is as bad as it seems.

Don’t Panic Over Bitcoin Below $9,500, John McAfee Says as His Exile Continues [blockmedia]

Popular cryptocurrency commentator and veteran entrepreneur John McAfee tweeted that people shouldn’t panic over the price of Bitcoin dropping below $9,500. The serial entrepreneur is a well-known Bitcoin proponent and has expressed optimism about the cryptocurrency in the long term multiple times. However, his exile continues as he has admitted to not filing tax returns for at least the past 7 years.

The S&P 500 has traded sideways since the trade war began, underscoring the market’s fear of tariffs. | Source: Yahoo Finance

The Dow strung together its third straight triple-digit advance on Friday, seeking to end the week with a bang after President Trump teased a new tax cut that supporters say would grow the economy, extending the longest expansion in US history.
Wall Street’s three most closely watched indices rose in tandem during the week’s final trading session. As of 10:36 am ET, the Dow Jones Industrial Average had gained 103.12 points, lifting the DJIA 0.39% to 26,465.37.

The following weekly newsletter is republished with permission from Global Coin Research, a global research firm with a focus on Asia blockchain and related technologies. You can find more resources on Asia Cryptocurrency and Blockchain at GlobalCoinResearch.com and on Twitter at @globalcoinrsrch

Binance has come up with a detailed research report about the new People’s Bank of China (PBoC) Central Bank Digital Currency (CBDC). The research reveals that the new currency will be a two-tiered system and is aimed at replacing cash.

Alan Howard, who is a British billionaire hedge fund manager, now wants to launch a $1 billion venture that would invest in different cryptocurrency hedge funds. The goal is to be able to profit from the current bull market the cryptocurrency industry is experiencing. This is according to a recent report released by the Financial Times.