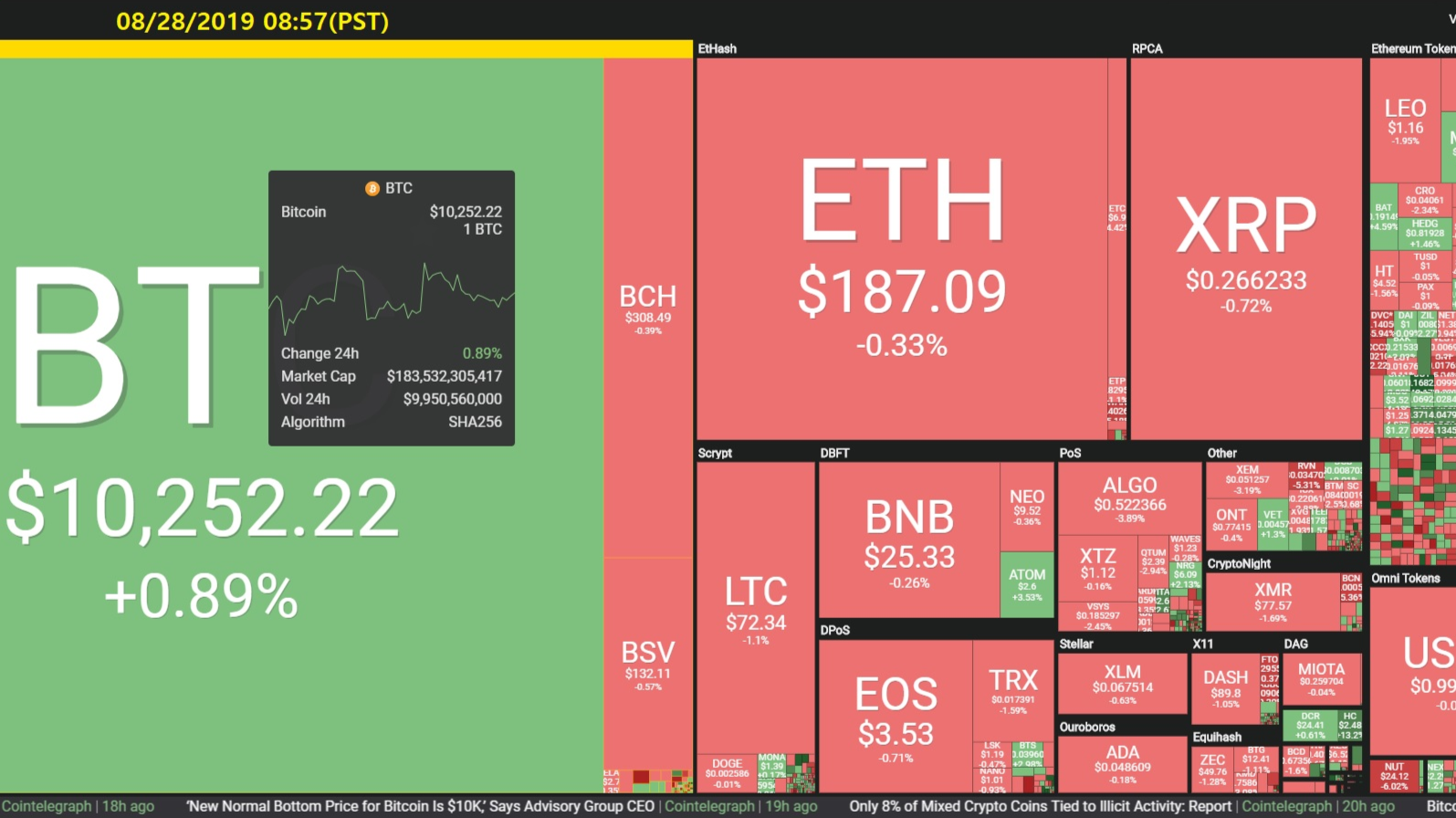 Data from Coin360 painted a fairly unremarkable picture of Bitcoin markets on Wednesday, the largest cryptocurrency trading in a narrow corridor between $10,050 and $10,250.

BTC/USD has stayed above the $10,000 mark since Monday, repeatedly testing but failing to break support for five figures.

The Psychological Importance Of $10k: 30 Days Of Bitcoin Prices [cryptobriefing.com]

Is $10,000 really a magic number for Bitcoin? Do traders care if it trades above or below this mark? It certainly seems so.

Bitcoin is trapped in an extremely narrow trading range as we head into the U.S session, following another minor bounce from just above the $10,000 support level. With Bitcoin close to posting thirty consecutive daily prices above the $10,000 level, we thought it may be a good time at look at this key psychological barrier and what it may mean for Bitcoin going forward.

The Dow declined for a second straight session on Wednesday. | Source: Yahoo Finance

The Dow stumbled toward a losing session on Wednesday after President Trump appeared to double down on his controversial trade war strategy ahead of new tariffs scheduled for this weekend.

Meanwhile, one Wall Street strategist warns that the stock market could be on the cusp of entering a nauseating “death spiral.”

The Dow Jones Industrial Average and other bellwether indices continued to bleed this morning after Tuesday’s early rally fell short.

US President Donald Trump reassured that the economic situation with China is “doing very well.” The tweet came weeks after the imposition of yet another tariff imposition which saw traditional markets plunge into the red. Despite his reassurance, the overall market condition is still far from positive. Amid this economic uncertainty, Bitcoin remains relatively stable above $10,000, showcasing its negative correlation to traditional markets yet again.

Craig Wright’s Claims His Loss Of $5 Billion Bitcoin Will Crash The Market; Only In His Wild Dreams [bitcoinexchangeguide.com]

“Dr. Wright’s story not only was not supported by other evidence in the record, it defies common sense and real-life experience. Consider his claims. He designed Bitcoin to be an anonymous digital cash system with an evidentiary trail. DE 236 at 15. He mined approximately 1,000,000 bitcoin, but there is no accessible evidentiary trail for the vast majority of them.”

On the surface, Bitcoin (BTC) looks downright boring today, trading on low volume within a very narrow range. But in fact, the leading crypto has been squeezed into an extremely tight corner of a pattern, and volatility could swiftly return at any moment.

We start with a 6-hour chart, below, showing the 200 exponential moving average (EMA). This average has been an inflection point for Bitcoin’s price since mid-August (and even before). And on the August 26 fakeout out of this pattern, price was quickly sold back below the 200.

Bitcoin’s recent price performance has provided little inspiration lately. An ongoing range-bound bounce between the high $9k and mid-$10k price levels has not given any clear direction of future movements. Some analysts expect a breakdown to a new lower low while others remain bullish.

The last 48 hours have seen the market go calm. The week has seen top coins largely trade sideways. Neither bears nor the bulls are taking charge of the situation which has seen market prices trade within recent ranges. Unfortunately, for most of these coins, they are trading near critical support positions.

For Bitcoin, the week began with a great prospect after hitting $10,500, however, the bears struck before dusk on Monday. Since then the asset has not been able to recover. Fortunately, the asset found strong support above $10K which has been a challenge in the last few weeks.

For both those involved in Bitcoin and traditional markets, all eyes have been on the Federal Reserve over the past few months.

Many analysts claim that whatever the American monetary authority decides to do with monetary policy will dictate the direction for global markets, and, potentially, the fate of the current fiat economic hegemony.

Bitcoin Teeters on $10K, But Can It Fend Off Another Bear? [coindesk.com]

The above chart shows bitcoin’s “network difficulty,” a function of how hard the software makes it to discover a new block and thus claim the new cryptocurrency it releases to the market.

Bitcoin’s recent market movements have thrown into contention consensus about its short-term price direction, with traders asking openly if demand is strong enough to fend off another bear market.

Such a question has emerged in the wake of the world’s largest cryptocurrency’s inability to set new highs above those seen in June and July, when optimism about a Facebook cryptocurrency launch pushed the price of bitcoin to $13,880 and $13,200 on June 26 and July 10, respectively.

Since then, bitcoin has largely failed to test these highs again, prompting speculation traders may be willing to push the market into a lower range, one that could be deepened by available futures options. 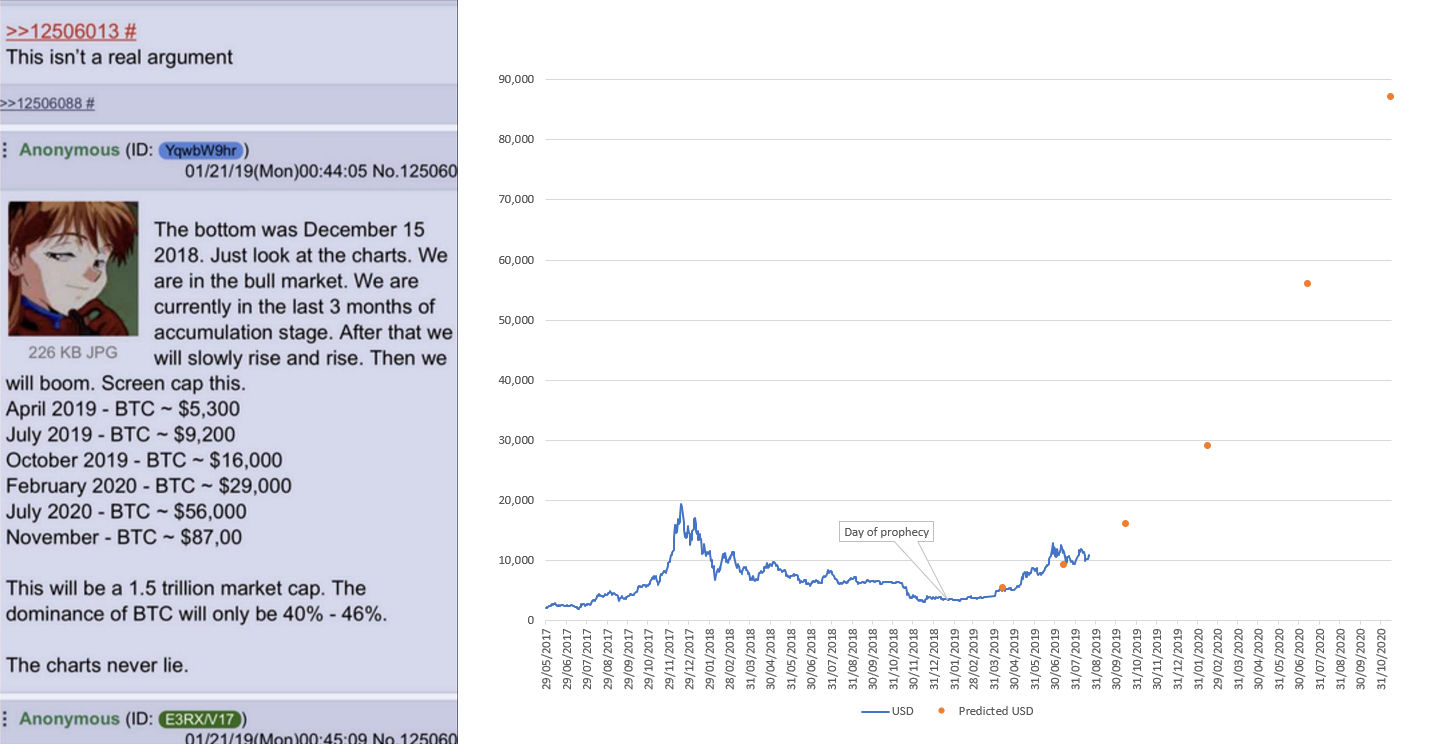 A series of Bitcoin predictions from an anonymous analyst are catching fire on Reddit.

The forecast was posted on 4chan on January 21st of this year, mapping out BTC’s price movements through November. A screenshot of the original post shot to the top of the Bitcoin subreddit on Tuesday, along with a graph showing the predicted parabolic movement.

Social media giant Facebook rattled regulatory cages when it announced plans for its Libra project earlier this year. Messaging platform Telegram has clear ambitions to win this particular race with the launch of GRAM, but will it hit the same brick wall?

According to an AMA (Ask Me Anything) session on Twitter, CZ followed up on last month’s announcement that Binance was planning to launch futures trading.

“Binance is planning to offer futures contracts on the exchange. Binance CEO Changpeng “CZ” Zhao announced plans for this futures trading feature during a presentation at the Asia Blockchain Summit in Taipei. 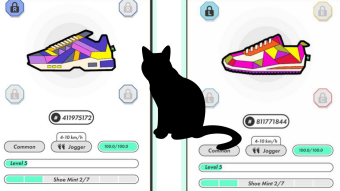