Here's Why Atom Will Be Bullish In 2022: Evmos And Interchain Security
MyCryptoOutlook2022 BitYard Contest and Giveaway - $1,200 in ETH Prizes! >> JOIN FROM HERE << 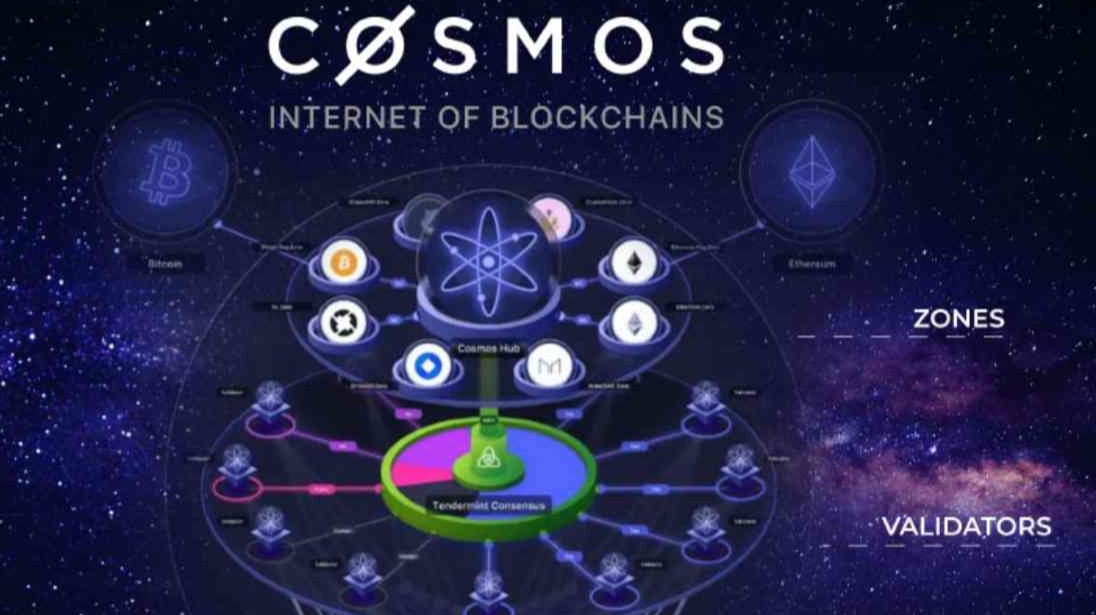 Here's Why Atom Will Be Bullish In 2022: Evmos And Interchain Security

The Terra blockchain has been integrated with the Cosmos IBC for a few months. IBC (Inter Blockchain Communication) is a "bridge" that connects different sidechains to Cosmos (Osmosis, Secret Network, Crypto.org chain, Juno Network, Comdex, Akash, Starname, Persistence, Desmos Network and also Terra). The big news of Cosmos for 2022 will be:

1) Interchain Security (this feature will make Cosmos similar to Polkadot. $Atom will secure not only its Cosmos chain but all other sidechains as well. This is what $Dot does with its parachains)
2) Evmos (this feature will make Cosmos compatible with Ethereum and the EVM world: BSC, Polygon, Fantom, Avalanche, etc). Evmos has announced a big airdrop that involves not only the Cosmos world but also the Ethereum one: The Evmos Rektdrop (Elegibility)

Osmosis (Cosmos sidechan) is a dex with many farming pools and interesting APY. The integration with Terra has made it possible to bring not only Luna but also its UST stablecoin to Osmosis. 2022 could finally be the year of the $Atom token because this flood of liquidity could do a lot of good for the token, same goes for interchain security.
The other reason there are big incentives to stake $Atom is definitely airdrops. In the Cosmos world it is known that many new projects airdrop their tokens to:

The other token to keep under observation is Juno Network which is inherent in the construction of smart contracts. Obviously I would like to emphasize that the airdrops are proportional to the quantities that are staking. If you stake 1 $Atom you will get little or no airdrop. The minimum order quantity is usually 5 $Atom. What protocols are airdrops of their tokens? 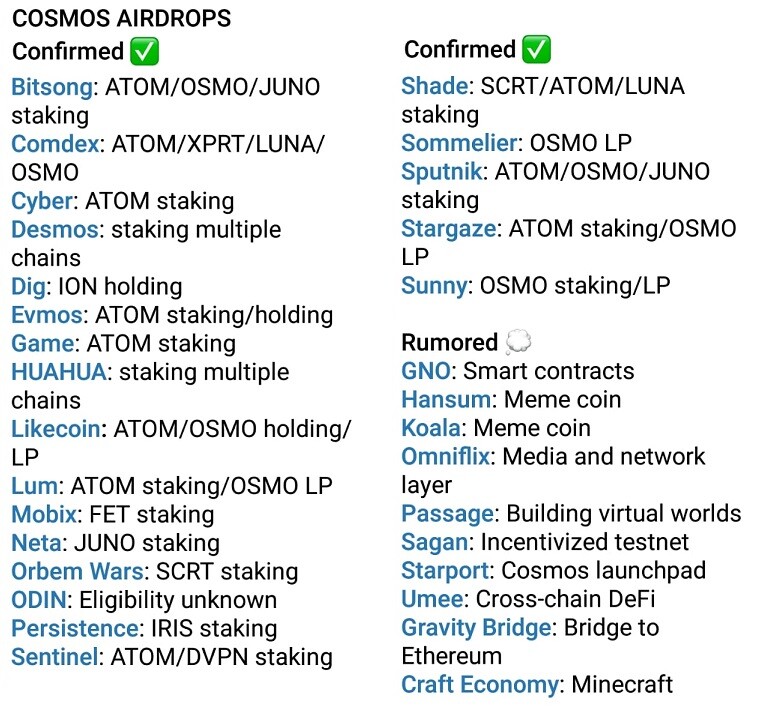 If you are staking $Atom or $Osmo, you may have missed some of these airdrops but don't worry you still have time to make the claim! The number of tokens received depends on:
1) Number of $Atom in staking
2) Number of $Osmo staked or amount of liquidity provided on Osmosis
One of the first airdrops was that of $Osmo: airdrop for those who had $Atom staking on February 18, 2021. On this date, other snapshots were taken (that of $ Juno and $ Game). Some LP on Osmosis also received the mysterious $Ion. I sold $Ion for around $1865: 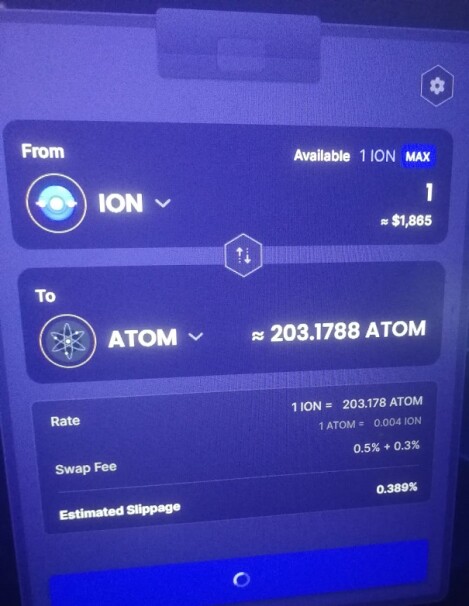 I am still crying for selling $Ion. Dump a token received as a gift isn't always the best solution. Usually when an airdrop is received a lot of people sell tokens. This is the best thing to do if you don't want to participate in the DAO. But very often after the dump, if you don't want to have any regrets, you have to buy the token again! You see how much $Ion is worth today:

Later LP on Osmosis were awarded $Sunny (strangely it is not a platform of the Cosmos ecosystem! Sunny is an aggregator on the Solana blockchain!). 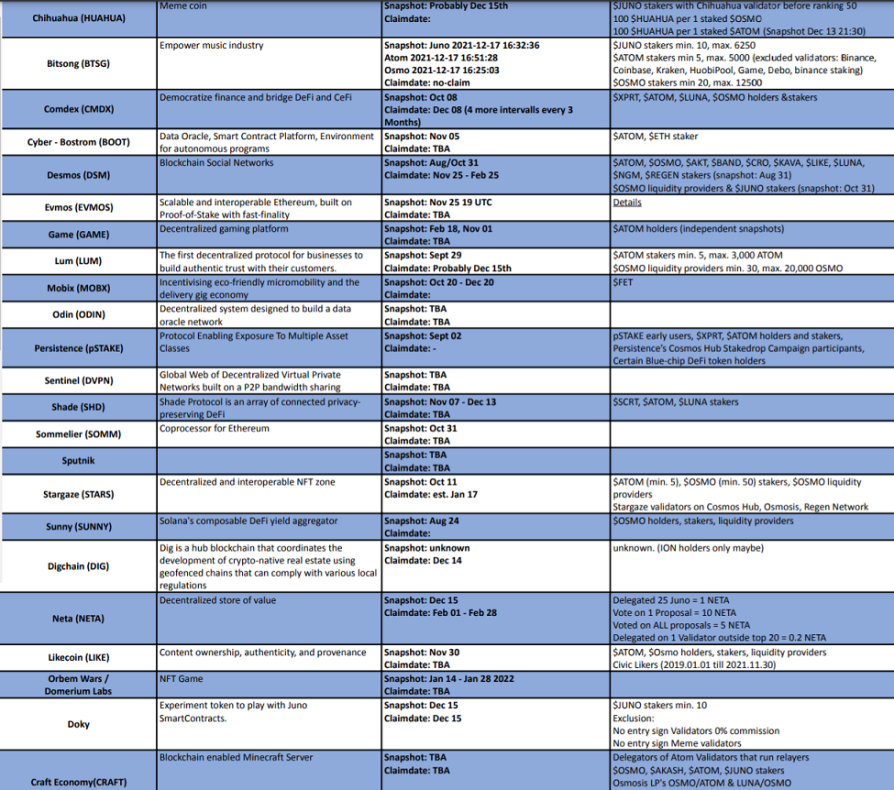 Two interesting airdrops were certainly that of Shade (they will launch an algorithmic stablecoin) and Comdex (it relates to derivatives and synthetic assets). These obviously proportional to the quantities staked on $Atom, $Osmo and $Luna. Desmos ($Dsm) & Stargaze ($Stars) on Osmosis will be listed shortly.
Desmos has awarded countless blockchains and platforms:
1) Atom, Juno, Osmosis, Regen, etc.
2) Terra
3) Crypto.org chain
4) Kava
5) Band 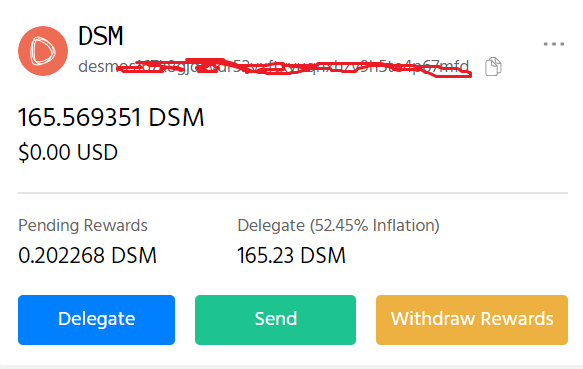 We don't know the price of $Dsm but we do know the price of $Stars (Stargaze) that will be airdropped in the coming weeks. The LBP (Liquid Bootstrapping Pool) was run on Osmosis to decide the price. I believe it is always the best thing to do! This is an anti-whale airdrop, where all stakers of $Atom and $Osmo were awarded with 2453 $Stars tokens regardless of the amounts put into play. This is a NFT platform.

Obviously, a shitcoin on Cosmos could not be missing. I'm talking about $Huahua which is a completely useless memecoin token (this is also an airdrop). Although I have noticed that they have a validator node in several Cosmos sidechains. Website: ChihuahuaChain

I will be doing a similar article on $Luna in the next few days. The Terra blockchain also gives many airdrops to its users. Stay connected. If you are interested in a probable airdrop of a protocol (it is rumors), I recommend this article: Unstoppable Domains Will Give An Airdrop Like Ethereum Name Service?