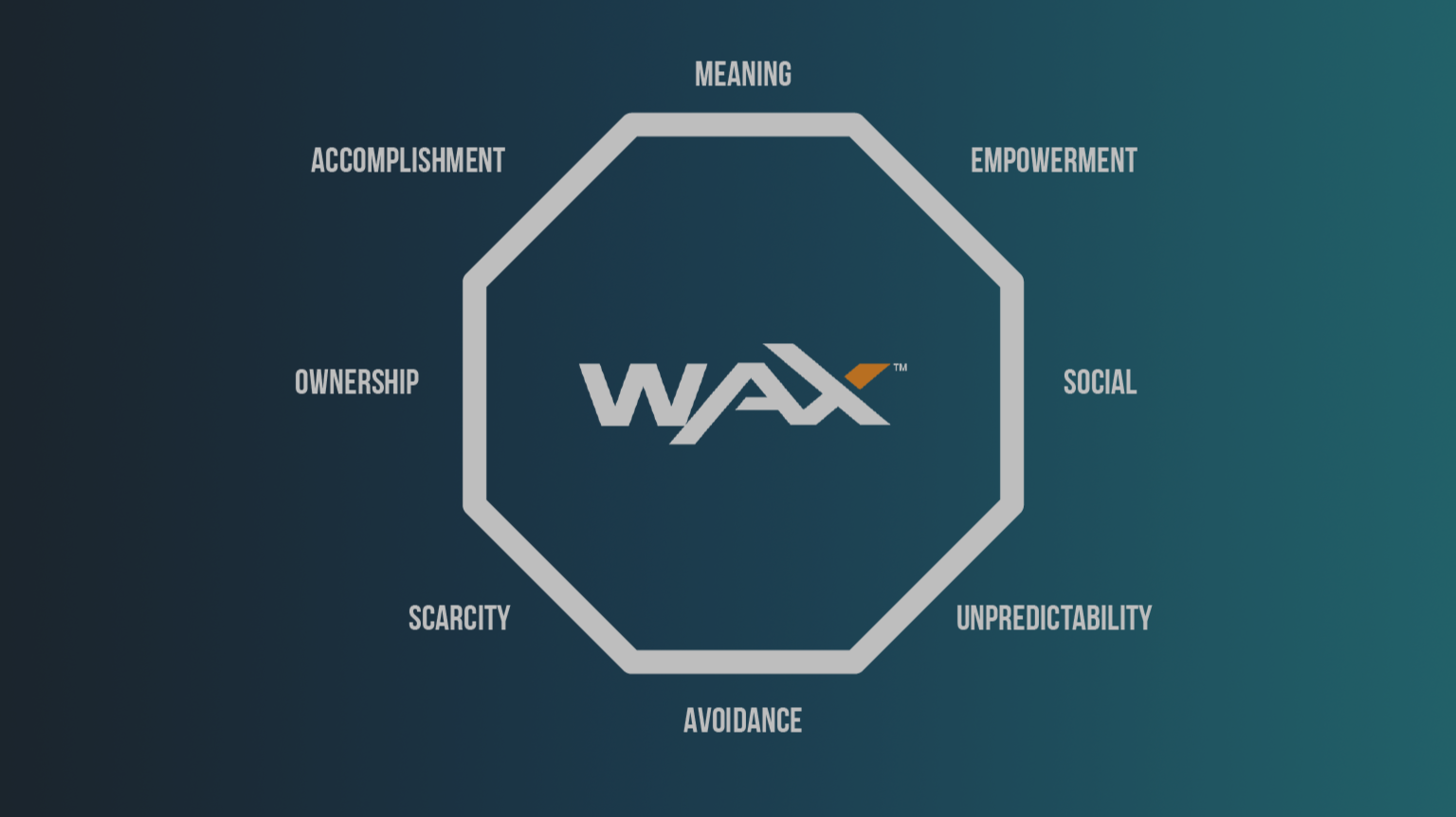 his article is based on Octalysis Gamification Framework

Working with various dApps at Dapplica we have always wondered how to engage users? I think almost every owner or developer of a product sooner or later asks himself this question.

As any product develops, when it already begins to gain traction, it becomes necessary to somehow retain users. Often, core functionality does an excellent job and solves the problem of users, but they do not stay for a long time and you often lose a precious client. This means that the time has come to add gamification functionality to the core.

In this article, we will understand what benefits an application or platform can get using the Gamification framework. We will use  the example of the WAX.io blockchain and its ecosystem solutions.

Gamification is design that places the most emphasis on human motivation in the process. In essence, it is Human-Focused Design (as opposed to “function-focused design”).

Gamification is the craft of deriving all the fun and engaging elements found in games and applying them to real-world or productive activities. This process is what I call “Human-Focused Design,” as opposed to “Function-Focused Design.” It’s a design process that optimizes for human motivation in a system, as opposed to pure efficiency.

Human-Focused Design remembers that people in a system have feelings, insecurities, and reasons why they want or do not want to do certain things, and therefore optimizes for their feelings, motivations, and engagement.

The reason it is called Gamification is because the gaming industry was the first to master Human-Focused Design.

Yu-kai Chou, the Author of Octalysis Gamification Framework spent a lot of time forming a complete Gamification framework to analyze and build strategies around the various systems that make a game fun.

And the end result of this work becomes the Gamification Framework called Octalysis, designed as an octagon shape with 8 Core Drives representing each side.

Based on this framework, everything that holds the user into the platform or application is within one or more of the 8 Core Drives of this framework.

Read how to build your own game on WAX.io – https://dapplica.io/blog/wax/building-wax-games-series-part-1-match-3-game/

How to retain user in WAX blockchain

The WAXIO has some of the characteristics of Human-Focused Design at the moment. A lot of dApps appeared on the platform that use several Core Drives, taking NFT items as a basis. But it must be said that much more can be done to fully and effectively engage users.

To use more Core Drives, it is necessary to develop the application infrastructure in order to get extended features and become more complex and full-fledged. Next, we will delve deeper into the proposed user experience gamification scheme and consider each Core Drive in a simple way:

The 8 Core Drives of Gamification

This is the drive where people are motivated because they believe they are engaged in something that is bigger than themselves.

Within this drive, blockchain projects have always been strong, as they captivated enthusiasts with their innovation and a great goal to change the world. And WAX.io is no exception – the community feels like a part of something bigger.

Wax blockchain has a cool background and history, unique partnership projects Topps, William Shatner have been launched that make you feel part of the elite.

To make it easier for a user to enter the NFT world, you can use engagement techniques such as Beginner’s Luck and Free Lunch. Imagine that, within the community project, a new user in the early stages can purchase a limited NTF item at a very good price, or by taking a simple set of actions, he will receive something for free.

This is the Core Drive where people are driven by a sense of growth towards a goal and accomplishing it.

Awards and badges are classics of most games and are now often used in different applications and services as well. So why not implement this in dApps for NFT holders.

Looks like WAX.io and NFT oriented dApps do not use this drive at least to some extent.

You can implement progress tracking as part of obtaining and collecting NTF items. Present badges and awards for a specific collection of NTF items or progress in a particular application.

In the end, it is also possible to introduce a small competitive effect in the process of receiving and earning rewards, which will make the process even more attractive.

What is hard, but might be achievable is introducing levels of complexity and skill mastery in terms of flipping and collecting NFTs.

The Core Drive that really emphasizes on “Play.” It is when users are engaged in a creative process where they have to repeatedly figure things out and try different combinations.

How can a WAX.io user get creative? The first thing that comes to mind is creating your own NTF items. Also, the milestones unlocking process over and over again can be simply implemented in games.

At the moment, a few WAX.io dApps have basic solutions for creating NFTs, such as Simple Asset and Atomic Hub.

Also, NFT based games have been launched and are being developed where you can easily implement the process of manifesting creativity by the user. For example, the process of creating a deck in the Dark Country game. Part of the creative process is designing a way to unpack cards from packs, via using boosters. In Dark Country game, there are some tips and tricks to get this or that desired rarity of items.

As part of the blockchain platform, it is ideal to create a sandbox with Evergreen mechanics, where the developer will not need to add new content to keep the user interested. A cool example is the Sandbox blockchain platform where users independently and continuously fill the virtual world with content, showing their creativity.

It is based on the principle that because you own something, you want to improve it, protect it, and get more of it.

An ideal core drive from the blockchain point of view, since the very essence of NFT items is independent ownership. This feature makes it possible to feel the owner in a special way.

WAX.io is completely built on item ownership and this drive is especially evident here. Everything is organized so that the user can get, own and dispose of their virtual property as they wish.

To complement the user’s sense of item ownership, you can create an environment within the community project that the user creates and fills on his own. For example, creating your own personalized collection with the ability to show it to other participants.

It is related to activities inspired by what other people think, do, or say

This code drive also overlaps strongly with the formed principles of any blockchain community. WAX.io is no exception, with a core of followers that shape the vision and guide newcomers in the right direction.

WAX.io has an active strong community that mentors and makes you feel like a part of the team or collectors elite.

For those who are already actively involved in the process of collecting and using NFT items, an opportunity can be realized where they can show their wealth to others and receive social rewards in the form of likes and ratings. Some group quests and tasks can be introduced, based on some form of DAO, so users can make a shared collection for example.

It is the drive that motivates us simply because we are either unable to obtain something immediately, or because there is great difficulty in obtaining it.

WAXIO used this drive perfectly with the sale of Topps collectible cards and William Shatner Trading cards. Each of these collections sold out very quickly.

Regular events with the sale of valuable and limited NFT items stir up interest and fully use the Scarcity principle.

Use time frames. For example, at a certain period of the day, the cost decreases or it becomes possible to get a limited and rare NFT item. Limited offer and details on how many items would be sold also turns this drive on, so users buy out asap, what can be done is some VIP club that can get offers faster than others with some discount.

The main force behind our infatuation with experiences that are uncertain and involve chance.

Generally, this is a harmless drive of wanting to find out what will happen next. And probably the most used in blockchain projects. But in many dApps it is abused, creating decentralized casinos and enticing users to gambling.

Of course, this drive can be used in a more harmless way.

To use this drive, WAX.io has developed a decentralized random that anyone can use. It was also used to open packs of collectible cards from WAX.io

As part of this drive, there are many solutions to how to engage the user using Curiosity. For example, use a glowing choice for new users as part of your project onboarding, where the next step is always highlighted on the UI. Or use so-called Easter eggs – non-obvious, unexpected rewards. For example, just for surfing a distant page of your application.

It motivates through the fear of losing something or having undesirable events transpire.

This is the notorious FOMO that most blockchain enthusiasts are pursuing. This drive has been used many times in different variations ranging from cryptocurrency trading to decentralized gaming.

When selling NFT items on NFT marketplaces, the Evanescent Opportunities technique is constantly used with a countdown timer, which indicates the proximity to miss the profit and get a benefit in buying the necessary NFT.

In the case of collecting NTF items, the Rightful Heritage technique can work well. For example, show a unique item in the user’s possession for a certain period of time. And inform him that the item can become his permanent possession when performing certain actions.

Most of the user engagement techniques described above have long been known and used by many applications. But according to our observations, they are very rarely used in combination, which does not give a complete experience to the user. This can be clearly seen especially in blockchain projects.

From our point of view, the use of all 8 core drives will allow the project to interest, involve and hold the user’s attention for a long time, which is essential for the survival and development of any project.

Even more can be said – the full use of the proposed framework within your project can be the key to the mass audience that any blockchain project needs so much.

In the next articles, we will take a closer look at each of the core drives and think about how to integrate them into a blockchain product.

Dapplica is a blockchain development company building projects in the blockchain and cryptocurrencies industry. We are offering full development cycle for decentralized applications, as well as tokenization and technology consulting.

Dapplica is a Blockchain dApp Development company and a WAX guild