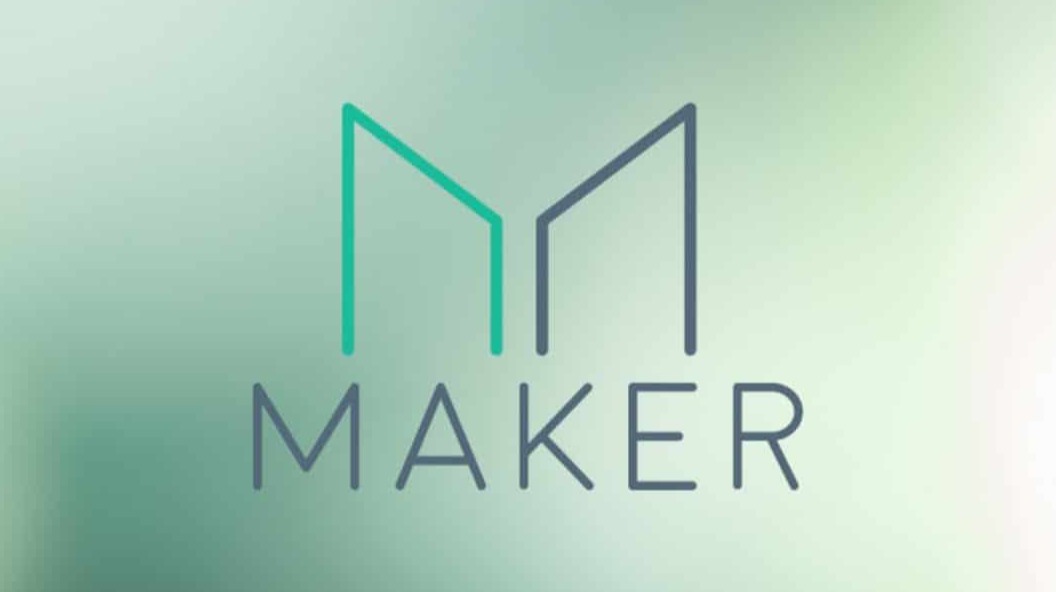 What is Maker (MKR)? [A Comprehensive Guide to Understanding Maker]

Cryptocurrencies, in the classical sense of the word, are intended to be used as a means of payment. Take Bitcoin for example, in the Bitcoin whitepaper Satoshi Nakamoto called Bitcoin a peer-to-peer electronic cash system. Many other cryptocurrencies such as Litecoin, Dash, Nano, and others were created with the same underlying purpose. However, these cryptocurrencies have yet to become widely adopted for their intended use and are seen more as speculative investments. This is because cryptocurrencies have very volatile price action and can go up or drop by 50% in value in the next few hours, days, weeks or months. This price uncertainty is what prevents people from spending crypto and merchants from accepting it. As well, this volatility causes people to sell their crypto into fiat currency, which in many countries is a taxable event.

Therefore, stability is a necessary component to expand the cryptocurrency ecosystem from traders and holders to businesses and everyday people. This is why the industry has come up with stablecoins – tokens pegged 1:1 to the US dollar. However, since stablecoins are pegged to the dollar, the issuers of these coins must hold fiat currency reserves to back up these tokens and thus follow a centralized model. Such stablecoins include Tether (USDT), USD Coin (USDC), Gemini Dollar (GUSD), and so on. While these stablecoins work just fine, they go against what this industry stands for – decentralization and a move away from the traditional monetary system of fiat currency.

However, not all is lost, for the visionary Maker (MKR) cryptocurrency project has created a decentralized stablecoin called DAI and it's backed by crypto, not fiat. In other words, Maker has created the first stable value that lives within a smart contract, making it a pioneer in the decentralized finance (DeFi) space.

Maker is one of the first companies to build on Ethereum as they were established in 2015 and began developing the DAI stable cryptocurrency for more than 3 years. The creators of Maker and DAI are CEO Rune Christensen and CTO Andy Milenius. Both of these guys are truly brilliant and realized the potential of Bitcoin and cryptocurrencies early on, making them crypto veterans. They created Maker because they understood the importance of decentralization and the need for a stable cryptocurrency.

The Maker (MKR) cryptocurrency was in development since 2015 but only launched in early 2018. The project did not conduct an initial coin offering (ICO) but instead distributed MKR tokens through private sales to people who understood and believed in the concept of their project. The total supply of Maker is 1 million MKR and all tokens are now in circulation, which is generally a positive thing for price discovery. As for Maker’s DAI stable cryptocurrency, it launched at the end of 2017 and has experienced significant traction since then.

Maker is one of the most complex cryptocurrencies to understand, which is why I’m going to do my best to break down the MKR token and its purpose so that you can fundamentally understand what it is, what it’s used for, and why it’s important.

Maker is a smart contract platform built on the Ethereum blockchain and it’s responsible for the backing, stabilizing, and issuance of the DAI stable cryptocurrency. The MKR token is utilized for paying fees in the Maker ecosystem as well as for governance decisions in Maker’s Decentralized Autonomous Organisation (DAO).

How is DAI Created and How is MKR Involved?

The DAI stable cryptocurrency is created via the Maker platform which offers everyone the opportunity to create DAI tokens in exchange for collateral. Currently, only Ether (ETH) can be used as collateral, but multi-collateralized DAI is coming out towards the end of 2019. The reason DAI is collateralized by users is to maintain decentralization and so that Maker cannot print money out of thin air.

To explain another way, say you deposit ETH into the Maker smart contract where it is then locked up and you receive DAI in return. For instance, say you lock up $1000 worth of Ether and you receive DAI on a 4:1 ratio – for every four dollars’ worth of Ether, you receive one dollar worth of DAI. So for $1000 worth of Ether, you would receive $250 in DAI. Essentially, when a user locks up ETH to receive DAI they are giving themselves a loan. You still own the $1000 of locked up Ether and now you own $250 worth of DAI. However, your Ether remains locked in Maker until you pay back the loaned $250 of DAI plus a stability fee that is paid with MKR. The stability fee helps to keep DAI at $1 as it is soft pegged 1:1 to USD.

The logic behind getting a DAI loan through Maker is that you can use the loaned DAI to invest in more Ether or other cryptocurrencies and if your investment goes up, you can simply unlock your ETH and pay the DAI loan back. With Maker, there’s no need to sell your ETH in order to receive more money through a loan to invest more.

But what if the Ether goes down, will you lose your locked ETH?

As long as the collateralization ratio stays above a certain percentage threshold your deposit will be safe. Therefore, to play it safe, you want to have a high collateralization ratio of say 400% – which is 4 times more than your outstanding debt. So if you lock up $1000 worth of ETH and receive $250 of DAI, and if ETH were to drop 50% you would be fine because your locked ETH would still be worth $500, which is still twice as much as your loaned DAI. Therefore, you would still have a collateralization of 200%, meaning you have enough funds to cover your debt.

To sum things up, the Maker smart contract platform is used for the collateralization and issuance of DAI through loans. Every time someone pays back a DAI loan, they pay a 0.5% annual fee. This fee is paid in MKR tokens and then immediately burned which continuously reduces the Maker supply. Therefore, anytime someone pays off their debt, Maker tokens are purchased at market price and immediately burned.

Maker (MKR) is a Governance Token

Besides MKR’s utility for paying fees, the MKR token is also a governance token for Maker’s Decentralized Autonomous Organisation, hence the name MakerDAO. A DAO on the blockchain enables token holders to vote on the project’s future. Therefore, MKR token holders can be involved in the project’s decision making by voting on proposals and submitting new ones.

MKR token holders have influence over aspects such as:

As I said before, Maker is a very complex cryptocurrency and there are many components and aspects to consider in order for the protocol to run smoothly.

Maker is said to be one of the most innovative cryptocurrency projects and has received praise from numerous experts in the space including the legendary creator of Ethereum, Vitalik Buterin. However, this does not mean Maker is free from issues and controversy. Maker is very complex and is still being improved and developed today.

One of the most known and talked about issues with Maker is surrounding the stability of its DAI stablecoin. DAI is an ERC-20 token soft pegged 1:1 with the United States dollar and it’s supposed to remain stable from the stability fees paid in MKR when users reclaim their locked ETH collateral. The stability fee is supposed to prevent DAI from dropping below $1 since the fee makes it expensive to mint more DAI tokens. 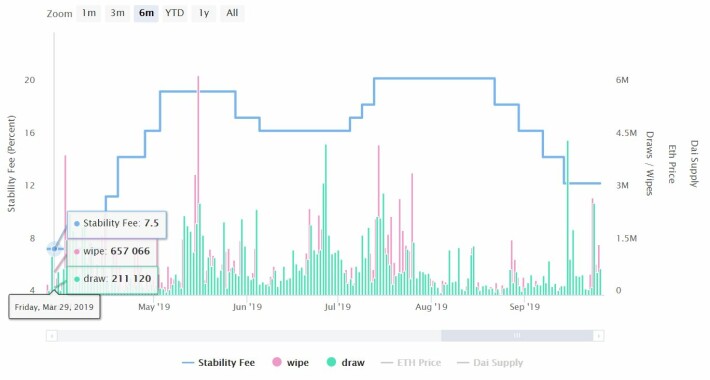 However, in the first half of 2019, DAI was consistently below $1 and even dropped to $0.95 on a couple of occasions. As a result the MakerDAO community (MKR token holders) voted on several occasions to raise the stability fee. Throughout 2019 the fee has been raised numerous times, reaching as high as 20.5% through July and August. The raising of this fee has helped to stabilize DAI to around $1, but the MakerDAO community is waiting for more substantial and longer-term solutions to be implemented. However, many proposed solutions remain controversial.

Another controversy with MakerDAO is regarding transparency of its governance board, which consists of nine unknown members who hold approximately 27% of MKR governance tokens. These members choose to remain anonymous and can largely influence the development of Maker. However, the team behind MakerDAO defends these members right to stay anonymous and says "the anonymity of the MEGF board is preserved due to security concerns." Moreover, the Maker Foundation is taking steps to resolve such transparency issues and is pursuing a formal and public board structure.

Maker is an extremely successful project when it comes to working products in the DeFi space. Maker pioneered the DeFi industry with its collateralized lending of DAI and it currently makes up over 50% of the DeFi lending market with more than $250 million locked in Maker.

Users can generate DAI or earn interest on DAI in Maker’s very own collateralized debt position (CDP) portal which supports 4 different crypto wallets; Metamask, Parity, Ledger Nano S, and Trezor. Additionally, users can choose to generate DAI or earn interest through various other CDP portals. One of the easiest ones to use is through the popular MyEtherWallet (MEW) which also uses Kyber Network to easily swap ETH or any other ERC-20 token for MKR or DAI.

There’s no denying that Maker and its DAI stable cryptocurrency are the most challenging projects in the crypto space. Yet Maker has managed to build and continue to develop the world’s first decentralized, crypto-backed stable cryptocurrency and DeFi lending market. What Maker is doing is truly revolutionary and it's shaping the future of finance today. The Maker ecosystem is growing steadily and the MKR token is dwindling in supply. Therefore, it may very well be one of the most promising projects in crypto as it has real utility, solves a hair-on-fire problem, and is achieving a high level of adoption.

What do you think about Maker (MKR)? Will it remain as the number 1 stable cryptocurrency platform? Let us know what you think in the comment section below.