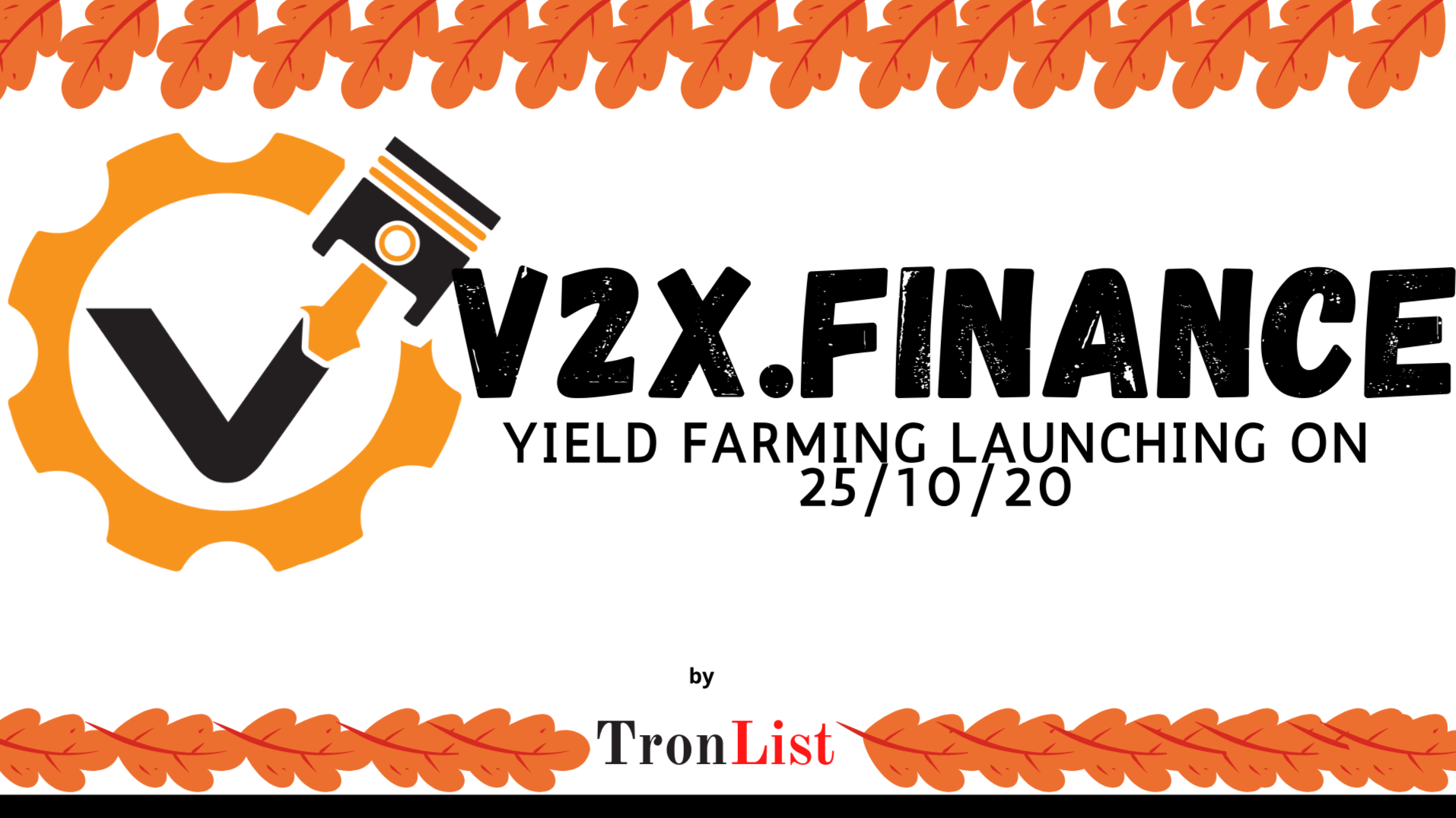 In todays article we will introduce you to V2X.Finance – the upcoming yield farming platform from two of the most successful DApps on the TRON Blockchain – VOIDX and T2X. What is V2X? How does it work and when is it going to launch? We have all the answers you seek and much more – keep on reading!

V2X is the newest Yield farming platform on the TRON blockchain. It is a collaboration between two amazing platforms – T2Xtoken.io and VoidX. With their combined efforts they aim to take the concept of yield farming and push it to the next level!

V2X will have a built in Dividends system on all V2X engines and a collective Multi Token Dividends Pool for the S-V2X-TRX Engine. What does that mean? Simply put you will have the chance to earn double with V2X. Let’s see how exactly it’s going to work:

You will be able to mine V2X tokens when you stake your coins into one of their initially available mining engines:

Furthermore you can then provide liquidity to JustSwap’s trading pair TRX/V2X with your mined V2X tokens. That will generate you S-V2X tokens, which can be staked at the S-V2X-TRX mining engine. By doing that you will then start earning a share of the Multi Token Dividends Pool of the S-V2X-TRX Mining Engine. If you are confused already here is a summary of how it all works:

The upcoming project doesn’t only impress with it’s multiple next generation mining/farming engines – their tokenomics are also made to last for years!

Entry and Exit Fees for the V2X Mining Engines:

All V2X Mining Engine Entry and Exit Fees will:

V2X LISTING AND NEXT PHASE

As soon as V2X is live and the mining has started, the developers will provide an amount of 300 000 TRX and 3000 V2X tokens for liquidity to JustSwap. That will create the trading pair V2X/TRX and allow users to buy and also add V2X tokens, which they mine, to the liquidity pool.

By doing that users will then receive S-V2X-TRX tokens as rewards and those as discussed above can then be used to join the S-V2X-TRX Mining Engine and start earning a share from the Multi Token Dividends.

Furthermore V2X plans on adding 5 more Mining Engines in the future. That will happen in periods – one new Token Engine will be released every 1460 Hours (2months). This will bring the number of total mining agents on the V2X.finance platform to 10 after 10 months with a final mining period of 1460 hours to mine the last V2X tokens.

After the mining ends, token holders will still be able to profit from the hourglass style dividends pools and also from the multi token dividends from the S-V2X-TRX mining engine.

After the success of T2X and VoidX – we can certainly expect a huge success of their merged efforts – V2X.Finance. The tokenomics are built to last years, the developers are trusted and the earning possibilities are endless with the multitoken-dividends. We can’t wait for the release on the 25th of October and will certainly keep you updated about its progress! Thanks for checking out our article and remember to always do you own research before investing anywhere.

Are you going to check out V2X? Let us know in the comments.