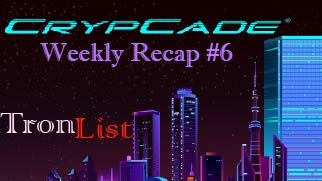 We have rolled over to the second half of August and the end of the summer nears. What happend in the past week at CrypCade? How is the dividends pool doing? Did they release any new games? What can we expect in the future? HOOOLD! Just keep calm and dig in this weeks recap #6.

Last week CrypCade rolled out 13 more Playson slot games. Some of them being “Diamond Wins -Hold and Win”, “Rise of Egypt – Deluxe” and “Vikings Gods – Thor & Loki”. Slot-lovers will never be disappointed here.

Last week stayed rather quite and the dividends werent spectacular, but which DApp doesnt have times where the dividends get lower and lower until they start getting higher again. The Div-Pool is something dynamic and has its ups and downs. Good news is its starting to grow again:

Divs for the past week.

All in all it was a quiet week at CrypCade. Of course what noone notices are the developers in the background that keep on working to deliver new and exciting updates and games to the platform.

That’s all for now and stay tuned for the next CrypCade Weekly Recap! Here are some of the great wins at CrypCade: