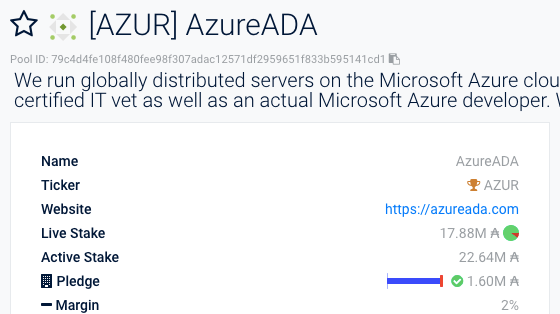 Hopefully, our delegators noticed that we produced another block this new epoch!

We're seeing, like many, many other pools, delegators are bouncing around between pools. I'd just encourage you all to be patient. Only 20% of the blocks are getting minted by stake pools at this point, so block counts are low... We are only on the second epoch where pools are producing. We are in the sweet spot for getting rewards... big enough to get blocks every epoch (probability-wise) yet not so big that the rewards get diluted by too many delegators. As time goes by, more blocks get assigned to stake pools, so block counts will increase. Our amount of blocks in epoch 1 ARE NOT indicative of what they will be like once the chain is fully turned over to pool operators.

Pretty much every pool with similar amounts of ADA is in the same boat from a probability standpoint. Blocks are randomly assigned, based on the amount of stake, so jumping from one similarly sized pool to another does not increase your chances of rewards. You may see a similar-sized pool that got more blocks than us last epoch, but we may have more this epoch or next. It's a lottery and the probability is the same for an amount of ADA.

To show how this is still random, for example, IOG19 had about 6x the stake we did last epoch, but made the same 1 block that we did, not 6 blocks. There were something like 11 pools with under 1 million ADA that also made one block (but like 500+ that made 0). And there are several pools bigger than us with still 0 blocks. As time progresses, sadly, some smaller pools will bow out, unable to consistently be awarded blocks, and they will be unable to maintain delegators, and our odds will go up accordingly.

When a pool begins to have a consistent pattern of missing blocks, THAT is a good reason to jump to another pool. AzureADA is in a great position, with global servers on a very robust cloud. And, we're not static, we are MOVING... we have some people we are working with us in Japan and Eastern Europe, with more areas coming to promote our site in multiple languages. We have two scheduled events with actual people from Cardano (IOG). We are also working on updating our website to a more modern look and hope to have that released within a week.

We are super excited to be at the forefront of the next-generation blockchain and grateful for the wonderful community of stake pool operators and delegators. We're looking forward to changing the future.

Also, reminder, the rewards are delayed by 1 epoch, so expect the first round on the 23rd.