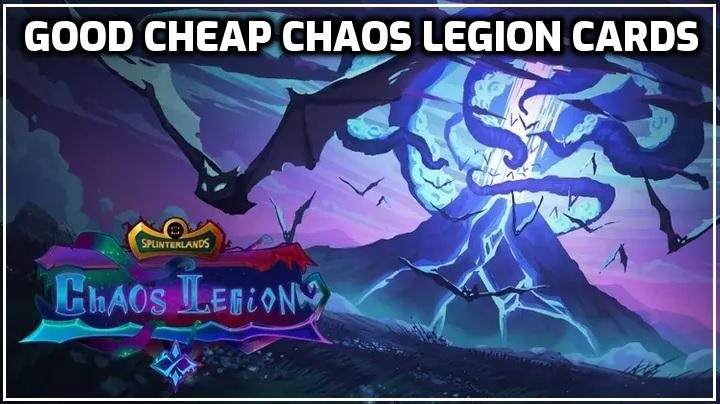 Last week, I made an article with my favorite Gladius Cards in Splinterlands along with some strategies I use to do well in the Brawls. These are the cheaper cards I regularly use from the Chaos Legion Set.

It's fairly easy to pick the best Chaos Legion cards as these are pretty much ranked based on price in relation to the rarity. In this regard, the Kelya Frendul Summoner is clearly the best while the General Sloan Summoner is the weakest. What I am more interested in is finding cheaper but still very useful cards. These are my favorites for the Chaos Legion Set So far playing in Gold / Diamond league with Level 5 Rare Summoners.

Even though the Kelya Frendul is the most expensive Rare Summoner of the set, it is so extremely versatile being useful with so many game rules that this for me remains the best value summoner for me. When shopping around and waiting for the right time, you should be able to get this currently for around 3.8$ a card. If anything I learned in my 3+ years of playing this game is that having good summoners is worth it even though they tend to be the more expensive cards. for around 160$ you get an excellent summoner that you will be able to use for years to come. Speed is especially to new players an overlooked feature as most don't understand that it influences the chances of opponents to miss hitting you. Having Armor on all monsters also increases survivability by a lot.

There aren't that many Chaos Legion Cards for the Fire Splinter that I really like as most of the solid melee attack cards that work well with the summoner come from the untamed and beta set.

The great thing about the Scorch Fiend is that there is no real need to have it higher than level 1. Having a 0 Mana cost card will be useful in not only the ultra-low mana battles but also in each battle where you have 1 spot in your line-up left. I would even argue that it's sometimes better to use up all mana on the other cards and fill the last spot with a 0 Mana card. Knowing a pack costs 4$ including 5 cards with a 1% chance of each card being Legendary, the current 4.46$ price for cards like this that are also very useful feels rather cheap also knowing it brings 500 Collection Power.

The Scavo Firebolt is a pretty cheap and useful card for the backline. Any card that costs 4 mana and has 3 ranged attack is useful. Especially in games where only 4 mana cards or less can be used these are a must and also in medium mana cap matches they tend to be useful. With a single edition costing 0.11$ and a level 4 cards already giving 3 Ranged attack, a cost of 2.75$ gives a cards that you will be able to use quite regularly with many different game rules.

Not only does the Water Splinter has the best Summoner, it also has some really powerful cards available. Most aren't cheap though but some I believe are.

The story with the Legendary Fiend cards for each of the summoners is pretty much the same. You only really need a level 1 while it costs between 4$ and 5$

The Blind ability which increases the chance of opponents missing is a very underrated one and the Flying Squid has it at level 6 which works extremely well combined with the +1 Armor and +1 Speed of the Kelya Summoner while it has high speed itself great for higher mana battles. The weakness remains Magic Damage which at the same time makes it even more powerful in matches where Magic is not allowed. At a price of 0.1$ for a single card, it's not extremely cheap to get it to level 6 but 10$ is quite reasonable.

Again a Single Fiend Card is a cheap and very useful card to have.

The great thing about the Mycelic Morphoid is that you only need it at level 3 to get the Thorns ability and it actis as an excellent card to put in 1st position to block some initial damage possibly hurting the opponent by 2 damage. For less than 1$ you are able to get a golden foil card.

4.3$ for a Legendary 500 Collection Power cards that can be used in many matches along with the fact that is a card that pretty much every player is going to need to be more competitive makes it worth to have.

The Portal Spinner for only 2.75$ gives you a card that makes use of the +1 Melee attack if the General Sloan Life Summoner and it also can be really useful in matches were all monsters have the blast ability and in matches with reverse speed.

Similar to the other Splinters, the Fiend card for the Death summoner around 4.5$ is a good buy

I don't think there are any other 3 mana cost cards with 3 Ranged attack at least at lower level. While the Soul Strangler is pretty vulnerable with only 3 health. It also is quite useful in low mana battles or fights were only up to 4 mana cards can be played. At a price of around 5$ for a level 5 cards it feels quite cheap.

The Disintegrator is a good and very cheap Neutral card just for the Demoralize ability making it a very suitable card to play in any match where Melee Monsters can attack from any position. The 1 Speed also makes it suitable for Reverse speed matches. Getting it to level 3 is more than enough which costs less than 1$.

Splinterlands has many really cheap higher-level cards available both from the Chaos Legion Set and the reward cards that are actually quite good which you can build a full deck with. The main bottleneck remains the summoners which I would say are worth the money. When you play to optimize the returns minimizing the spending, all these cards should be valid options.