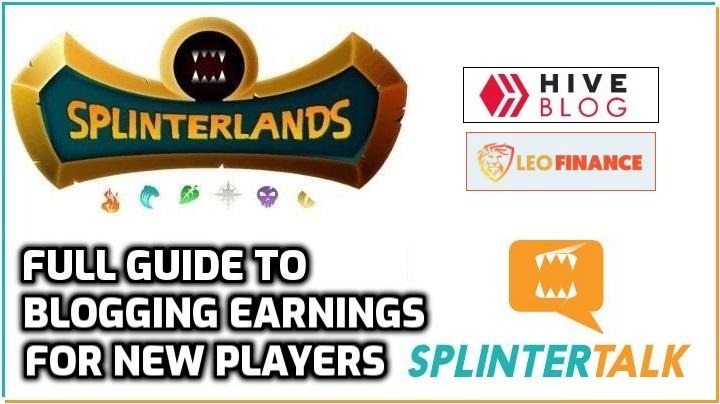 Splinterlands is not only a Play2Earn game, it also offers a vibrant community where players have to potential to earn something from being active in it. It can be a bit overwhelming for new players, so I made a guide to help them take their first steps into blogging...

Important: Similar to Splinterlands as a game, blogging is not a get-rich-quick scheme and it will require some effort and dedication before being able to make it into a stable stream of earnings. However, everyone who puts their mind on it should be able to succeed even without a requirement to invest.

Everyone that made an account on Splinterlands and bought the Summoner's Spellbook will have their own Hive Account as private keys can be requested from the Splinterlands website. It is advised to keep the Master Password/Owner Key private offline at all time while installing the Hive Keychain Extention where the Private Active & Posting can be entered in a safe way to easily interact with everything that is connected to the Hive Blockchain.

The Hive Blockchain is the base layer of all blogging and social activity with Hive.blog as the main interface that properly displays everything that is stored on the blockchain. Websites like Peakd.com and ecency.com also reads the hive blockchain and displays everything with a different layout and many alternate functionalities. It's up to personal preference in what you use.

Hive-Engine and Tribes / Communities
Hive-engine can be seen as a 2nd layer of the Hive Blockchain which has content-specific interfaces where only posts with specific tags are shown allowing communities to form. You have Splintertalk.io which has all the content around Splinterlands bundled, leofinance.io which is all about finance, investing and crypto, sportstalksocial.com which deals around Sports, and many more...

Hive is the native cryptocurrency of the base layer while each of the tribes has its own token with its own rules and value that can be earned on posts that also showcase on those interfaces.

The core idea is that the inflation of the token is distributed through upvotes given by those that have the tokens staked while the one who gives the upvotes also gets part of that inflation in the form of curation rewards. The more tokens you have staked, the bigger your upvote will be and the value of the token depends on both the fundamental use-case and how much value people put on them.

For Hive, the main use-case is the fact that users need a certain amount of Hive in order to transact on the blockchain. Big dapps with a huge user-base like Splinterlands provide this to their users and need a lot of Hive Power in order to run their entire business. The Value from the SPT token from splintertalk.io now mainly comes from the fact that it counts toward the SPS airdrop and that it helps to create a good trending page putting the better posts on top giving them much more exposure. The LEO token from leofinance.io has multiple mechanics where tokens are bought back and burned from the profit that is made by the platform. Each token has pretty much their own rules in this regard while they all have very similar mechanics.

7 days after a post is made, the payout of all the different tokens can be claimed both in your Hive Wallet and on Hive-engine in case of the Tribe Tokens. (leodex.io is an alternate layout for hive-engine) and everyone is free to do with them whatever they want as it is a free market.

The reality about the tokenomics, in general, is that things tend to get really complicated and they don't always make that much sense in that 'shitposts' often get big payout values while well-written posts often go unnoticed since there are many dynamics in play. The way I personally go about it is to not care about any of it and just focus on my own content as I really enjoy the writing aspect of it while it allows me to stay sharp while connecting to many like-minded people in the process.

Getting Started with Blogging as a Splinterlands Player

There are many curation projects that give upvotes based on content even for new players who haven't build a following yet. The best way for Splinterlands players to get started with blogging is without a doubt to join one of the weekly challenges put up by the team. When following the rules, you are almost guaranteed a good upvote from either the @splinterlands team on Hive (which earns you rewards in Hive) or from the @monster-curator team on Splintertalk.io (which earns your rewards in SPT).

For players who play the game and compete in ranked play and don't want to become a writer making regular blog posts, there is a way to make semi-automated posts submitting the SplinterStats Season report Card which makes a post for you showcasing all your stats and most-used cards of the season.

1. Have a Long-Term Mindset & Re-Invest Earnings
If you are in it for a quick buck, you might get away with it at the start but it won't be enjoyable and you'll give up sooner than later as you won't get any traction or followers. Instead, see it as a long-term project (years) and try to find some consistency in your approach. Re-invest what you earn to grow your blogging account or use part of the earnings to get more Splinterlands assets.

2. Have Your own Style
Bringing something that is unique works better than making posts that are rather uninspired. Here are some examples of Players that recently got in and started blogging putting some effort into it having their own style and target audience.

Both got a big upvote for their effort from the @splinterlands team and likely also managed to earn some SPT. Pretty much everyone can achieve this without being required to invest.

3. Engage in the Community
Nobody is really actively looking for 'good content' or bloggers to follow on hive or Splintertalk. In order to get noticed, you really need to engage in the community and look for like-minded people. Take some time to look for other bloggers and leave a genuine comment and an upvote on what you like. You can put bloggers you like on your auto-upvote list using hive.vote which also helps to save time curating. You should also join the Splinterlands Discord where you are allowed to share your content.

4. Make Your Posts Visual with a Custom Thumbnail
Nobody likes just plain text or a boring standard thumbnail so take some time to learn how to make posts look nice which can be done with Markdown . Posts with custom thumbnails tend to do much better especially on Splintertalk as the curators look at this since they want the trending page to look as nice as possible. It's one of those things where you put in some time once and continue to enjoy the benefits after.

5. Reblog your posts onto your main page
So when you use Splintertalk or other interfaces to submit your posts, they often only show in the posts tab on Hive.blog. In order to get them on your main front blogging page, you can reblog them on there so everyone that just visits your page instantly sees that you are actually active.

6. Quality over Quantity
One of the issues of Hive is that it's tempting to create shitposts (like a daily quest rewards sharing post) just to pick up some pennies. While this might work, it probably won't get you very far in the long run as nobody wants to get these kinds of posts in their feed.

7. Stake SPT & Delegate to @monster-curator
Blogging about Splinterlands using the spt tag (or Splintertalk.io interface) will most likely earn you SPT which counts toward the SPS airdrop points. You can either use these to manually curate other Splinterlands posts earning some curation rewards on those or you can delegate them to @monster-curator which will earn you passive daily curation returns while also still getting you the SPS airdrop.

8. Include Your Splinterlands Referral link
The Hive blogging platforms have quite a good Search Engine Optimization and you always have a chance to pick up one or more affiliates from your blogging effort along the way if you include Splinterlands referral links. The code in order to incorporate links into regular text is:

9. Content that can do well...
As a new player, it might be a good idea to start blogging about your personal experience with Splinterlands. Once you get better you can get yourself in a position to share guides or tutorials that help new players to get in or share strategies that work quite well for you. Breaking down personal earnings or economics about the gale is something many players are also interested in and the more knowledge you have on everything in the game, the more of a unique perspective you can write about.

10. Enjoy Blogging
I guess this is the most important thing of all, you really need to enjoy the process of writing in order to stick to it and do well over time.

Noise.cash is a crypto microblogging platform that rewards users with Bitcoin Cash (which can be used to buy credits in Splinterlands). There is a Splinterlands Chamber & Blockchain Gaming Channel where users share short posts (Twitter-style) about the game usually sharing what they got from the daily loot chests. The way the platform works is that each upvote has a random chance to give some BCH which all comes from a reward pool that got fully sponsored. It is quite an enjoyable experience and you are able to connect to other players there if you are active both sharing some posts and commenting on others. The earnings also really add up as I have received 162.82€ in BCH earnings so far since June 29th which was my first 10$ payout. What you don't want to do is try to exploit the system by spamming or creating multiple accounts because that will get you banned. I honestly don't expect this easy way to earn to last that much longer as it's just not a sustainable model. 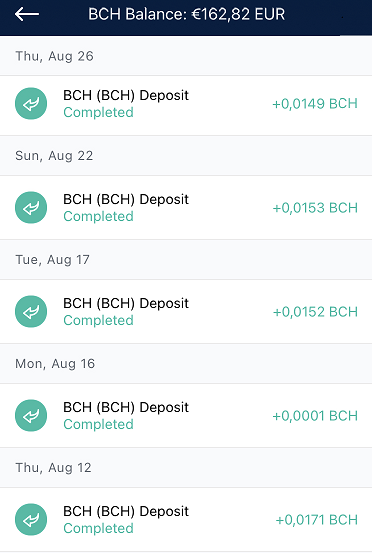 Splinterlands has a really awesome community and being active blogging or commenting offers one of the most undiscovered ways to earn from the game especially for those that are willing to put some effort into it. To anyone that might think it is something that they could enjoy, I would highly recommend it. Especially for new players who want to grow in the Splinterlands game without being willing/able to invest a lot, it offers a great opportunity to speed things up and also make some friends along the way.