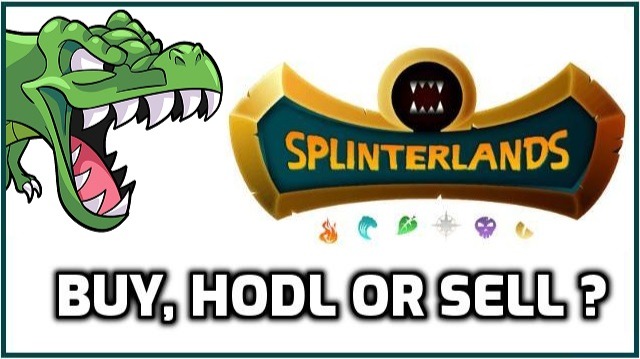 Today, I'm having a look at if it still is a good time to get in on Splinterlands or if long-time players like myself should continue to accumulate, hodl, or start taking some profit...

I have covered a similar topic on where the valuation of Splinterlands, in general, is at in the past. See Reasons DEC Price Will Go Up +33% & Reasons I'm Buying More Cards & DEC. (TLDR: to see the general conclusion of this post, scroll all the way down...)

I have been doing pretty well with the game and it continues to provide multiple ways to earn some crypto which certainly all add up. I keep close track of my progress and managed to increase my personal card collection value from 492.48$ in January 2020 to 4287.64$ today nearly exclusively by organic growth collecting rewards while seeing the prices go up not including DEC earnings which I have been using to invest in other cryptos (See Crypto Altcoin Investment Portfolio) or bogging earnings and the 12 Land Plots I got airdropped along with some Totems.

Getting these results certainly did require some systematic daily effort being occupied with the game completing the daily quests and writing posts like this one which I still really enjoy doing.

Similar to other crypto games or projects, it's a matter of looking at fundamentals, on-chain metrics, Hype & cycles in order to make a proper estimation if something is overvalued or undervalued. 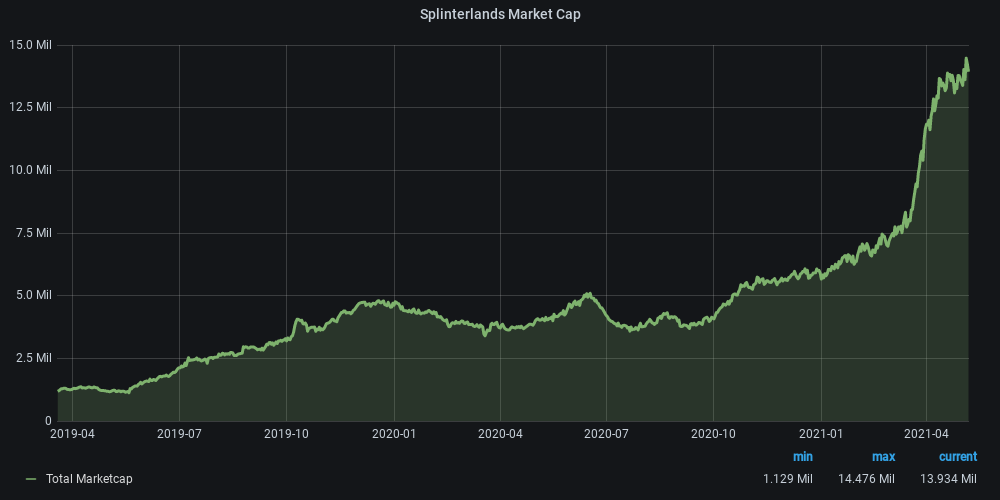 So basically, there needs to be an increasing demand in order to keep these prices up. If the number of new people that enter and want to play is bigger compared to those who are selling for profit or leaving, the prices should be able to sustain themselves. If there is hype, it might go higher and if overall interest drops, prices will inevitably also go down.

This entire dynamic pretty much requires constant growth and new players willing to buy and hold on to their cards with the weight of the cards along with DEC in circulation increasing each day. Eventually, at some point, the weight will be too heavy to be carried causing downward price pressure.

Aside from the cards, there is the DEC Supply which also increases each day and currently has a 622k value of in-game purchases. The 150k plots of land will have to be added to the overall valuation along with the Totems and SPT which at some point likely also will get a use-case in the game.

Total Player Base Growth
Looking at the number of players over the last 2 years, it can be seen in the chart that there is steady growth from around 1500 to close to 7000 now as daily active users. With crypto getting more and more adoption and the team working hard developing the game and looking for more ways to get exposure, it is quite likely to see this number continuing to grow.

I haven't tried most of these, but from what I have been hearing from others that have, Splinterlands at this moment for them stands out as one of the better overall experiences. The current ~15 to 20 Million valuation of all Splinterlands assets still looks tiny at the moment compared to some of the other games even though the comparison doesn't always make sense.

Still Early and Worth Getting Into Splinterlands?

Even though it looks like the Zone of Maximum opportunity (Last year when some whales were dumping and prices were really cheap) is behind us. I still believe it is quite early with only around 7000 Daily active Players and a lot of new updates on the horizon with crypto getting more and more mainstream each day. It will however require more brainpower to start from nothing building a competitive collection without any investment and the risk of the card values going down at some point instead of increasing also certainly is higher. The process of learning how to play along with the challenge of collecting also provides some fun.

Both articles I made on How To Earn 100$+ Monthly (Complete Guide) & 10 Tips & Tricks for New Players still hold up at the moment with especially the Blogging earnings with good upvotes from the Splinterlands team make it so anyone who wants to put some effort will be able to grow much quicker in the game this way.

After playing 2+ years, it has come to a point where I still very much enjoy everything around the game like:

Playing the game itself, however, has become a dull routine since the number of games where skill and strategy make a difference is so rare due to the heavy pay2win aspect. The devs seem to totally neglect this since they mostly seem to focus on making sure that the economy in the game holds up (which works) at the cost of making the game more fun.

I still continue to enjoy everything around the game itself and am looking forward to the land Expansion and the Chaos Legion Packs with new cards even though I lost hope that the game itself will ever have a focus on fun or skill. Right now, I am switching to a stage of optimization where I will continue to grind the daily quests holding on to most of my cards while starting to take some profit on the less useful duplicate cards I have. I'm also saving Affiliate Earnings as credits to hopefully be able to stay competitive in Gold League once the older beta foil cards get moved to a separate wild mode or get their use case to farm Items and Spells on the Land. I also continue to use the DEC I'm earning an earnings source to invest in other cryptos.

For now, I will continue to offer the sign-up Promo I have been offering to everyone that used my referral link for the last 1 year onboarding 100+ new players into Splinterlands (See Onboarding 100 Players Goal Reached! (Affiliate Report #4)

For as far as Buy, Hodl, or Sell is concerned. A case can be made for each of them. I believe it still worth getting into Splinterlands for new players if they play it smart and disciplined. The rewards are still great giving existing players enough reason to hold on to their cards and expand their collection while those who have been able to get a lot of cheap cards during the whale sell-off are provided with a good opportunity to take some profit.