33 Reasons Why You Should Be Using HIVE Blockchain 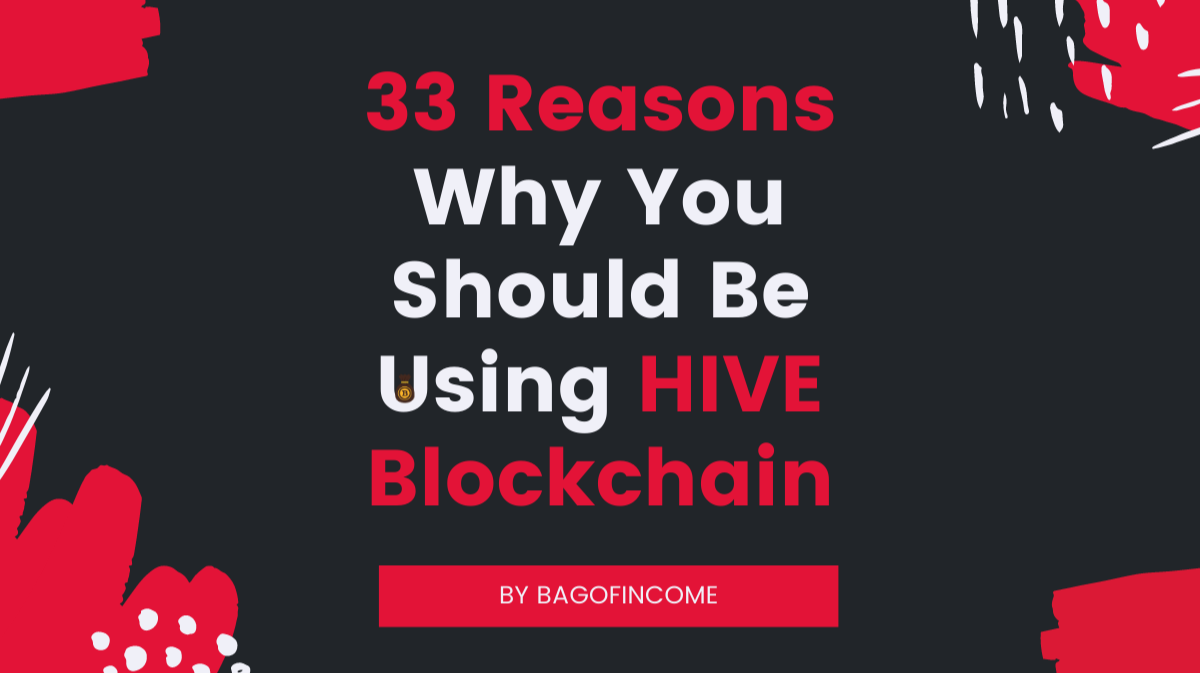 33 Reasons Why You Should Be Using HIVE Blockchain

Today was the day that boi decided to give up on sleep so that he could write a nice long list of reasons why you should use the HIVE blockchain. Hopefully, some of these things will make you think and maybe even join this place yourself. If you are already a HIVE user, go through the list and tell me what I forgot. Enjoy!

Even though many don't want to admit it - getting paid for being active is the number one reason why we're here. It is actually as simple as it sounds! Your interaction with others will be rewarded with cryptocurrencies which you can later sell or use for other things. Seven days after you created your article or comment, you will be paid, and what you do with your rewards afterward is entirely up to you.

You can find a vast amount of information here on the blockchain. There are many wise people here who are sharing their knowledge with others. Most of the content is a much better read than some random news outlet that we often find ourselves in. Read, learn, practice, and grow!

You can't be censored here. You can talk about anything you want without worrying about being banned. Even if everyone dislikes and blacklists you, your posts will still be on the blockchain. If Trump was on HIVE, he wouldn't be banned and could write as much as he wanted.

Even when we're gone, the HIVE blockchain will remain. If you decide to give it a go, you'll make digital history books for our grandchildren to read. I doubt that you will still be able to see your Twitter or Facebook posts after 50 years. For HIVE, I'm sure that things will thrive!

Some say you can't find friends on the internet but many have proven otherwise. On HIVE, you talk to people and they talk to you back. With time, you will have some interesting relationships formed that you didn't know where possible.

Once you've started using HIVE, you won't go back to the mindless Facebook scrolling. You'll soon realize how valuable your time really is. Instead of going around with no aim, you'll actually read and learn something new every single day. It will become addicting, believe me!

Growing as a Person

Once you've started your journey of content creation, you'll start improving yourself. If you're consistent and move forward every day, soon you'll look back and see how the quality of your content (and upvotes) have increased over time. It's beautiful once you get it going!

There are more communities on HIVE than I can even list. Starting from crypto, gaming, science fiction, education, and sports to politics, conspiracies, learning, lifestyle, and many others. A lot of them have their own second-layer tokens that are given to active community members.

Staking and Powering Up

When you've earned your first tokens, you can power them up to make your vote bigger. It's like investing in yourself to get bigger returns in the future. A part of your upvote comes back to you in the form of HIVE tokens. And you'll be able to put a smile on someone's face by giving out a big vote once in a while.

Even though I hate drama, it's sometimes necessary for us to go through it in order to come out stronger. After the hostile take-over of Steem, the HIVE team made a promise to not give up everything they've worked for and started a war against Justin Sun.

The war ended with the creation of a new blockchain called HIVE. It was the answer from the community that decentralization is real and no crypto millionaire can take our life's work. Each Steem user was airdropped the exact amount of HIVE on the new chain! Most of us switched and now Steem is only a Korean ghost town. The community will always find a way to deal with the problems along the way.

Looking At the Future

HIVE is growing at a rapid pace and more people are joining up to give this place a shot. More projects and movements are appearing and it makes me think we're only at the beginning of this journey. This place is going to bring real changes to the lives of some people and it will be glorious to see (and hopefully, experience on my own skin).

There is more to HIVE than you can see at the beginning. In addition to the HIVE token and HBD, there are lots of second-layer tokens that you can earn. Either it's from using certain hive front-ends or playing games, these tokens can be traded just like every other cryptocurrency.

There are games built on this blockchain. Not only can you rest your mind to play a game, but you will also earn some tokens along the way. You can check out this article for some of the games that are here. Imagine getting a unique blockchain item that you could later sell for a big chunk of crypto!

Not only does HIVE has games, but it also has multiple other decentralized apps built upon it. Check out this page to see for yourself. Oh, and if you're a coder or developer, you can easily build your own app on the HIVE blockchain.

Being Free From CEO's

Hive has no CEO! This is a fact proving that right now Hive is as close to decentralization as you can get. Just like Bitcoin, HIVE has no CEO. It's an open-source protocol that anyone can use to build their own apps on it. At the same time, witnesses are interested in this chain to succeed and that's why they are improving it constantly.

There are no fees on the HIVE blockchain! Really! For Ethereum maximalists it could be hard to comprehend. Especially after they've paid millions in fees. Having no fees makes things easier, especially for crypto beginners and people who don't have additional funds to pay hundreds of dollars on Uniswap.

Everything that happens on the chain, remains on the chain. You can see every user's wallet and what he's doing with his funds on HIVE. It's beautiful! Imagine if your government workers had this?! They couldn't take bribes so easily anymore.

On HIVE, there are witnesses. They're the ones running HIVE nodes. And they are getting paid for it. All HIVE users can vote for their favorite witnesses and track the data in real-time. Just look here.

Anyone here has an opportunity, a chance to become a whale. A whale is someone with lots of Hive Power meaning their upvote is worth much more than the average user. If you invest your earnings, your account will grow, and soon you'll look back with a smile on your face.

There are HIVE applications that allow you to create your own HIVE invitation link and invite friends to join up this platform. For example, hiveonboard. If someone uses your invitation, for a certain time, you'll earn a small part of their earnings.

As new projects are announced, we often have the chance to invest and get our hands on these tokens. More often than not, those who are courageous enough to do that, get the best rewards. Imagine buying LEO token when it was only $0.05! Now it's more than $0.50!

Blogging About Money On LeoFinance

LeoFinance is a magical place when it comes to blogging about crypto-economics, and other money related topics. It's also the best paying HIVE front-end out there with lots of new additions coming in 2021. If you're into crypto and not on Leo, you're missing out big time!

Getting In The Geyser

There's a wrapped Leo version on the Ethereum chain where Leo owners can provide liquidity in Uniswap pools to receive rewards in LEO tokens. It's a great way to help the Leo ecosystem and get rewarded for doing it. It's called Geyser distribution of rewards and you can find a post about it here.

If you're a video creator, 3speak is an excellent place where to put out your content. Firstly, you won't have to worry about being censored or banned, secondly, it's time you stopped feeding Youtube and Google and took power back into your own hands! Using decentralized platforms like 3speak is a perfect way to do that!

On Hivestats, you can see exactly how much you've earned and how fast is your account growing. A nice tool that can give you a little motivation boost along the way.

Selling and Buying NFT's In The Showroom

NFT's are gaining a lot of traction lately. But if anyone wants to put their artwork on the Ethereum chain, for example, on Rarible, they'll pay tens of dollars in fees. HIVE blockchain has its own NFT Showroom where you can add your artwork completely for free.

LeoFinance recently announced an airdrop that all LEO holders will receive once the new microblogging platform is released. It's a great opportunity to get yourself some free coins, especially if you're already a LEO holder.

The article that you are reading right now has earned tokens in more than three different HIVE front-ends. Thanks to @achim03 who spotted that I haven't added reason number 31, I had the chance to edit this article adding screenshots of my earnings only 2 hours after I posted this article. The first one is the default hive.blog, the second is LeoFinance and the third is CTPtalk. Beautiful, right? All I have to do is use the right hashtag at the end of my posts, and I'll receive more tokens than I can count.

Everyone wants to be successful but not everyone wants to put in the effort to achieve success. Those of us who are working our asses off now will reap the benefits later. Those who are lazy, won't experience the same. HIVE is a great place where you can start making a difference.

There's no other place than LeoFinance where you could read @bagofincome and his articles. Yes, I am in many places but the biggest part of the content gets released on Leo first and then re-published on some other platforms with a link back to Leo.

Thank you for coming here and hopefully, you enjoyed this list!

Being one of the newest blogs in the Blog town is not an obstacle for BOI to earn money online. Always searching for new sources of income, sharing personal experience and inspiring you to earn an income of your own! 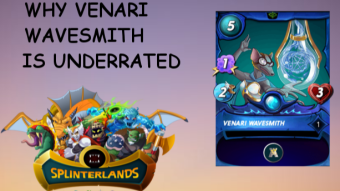