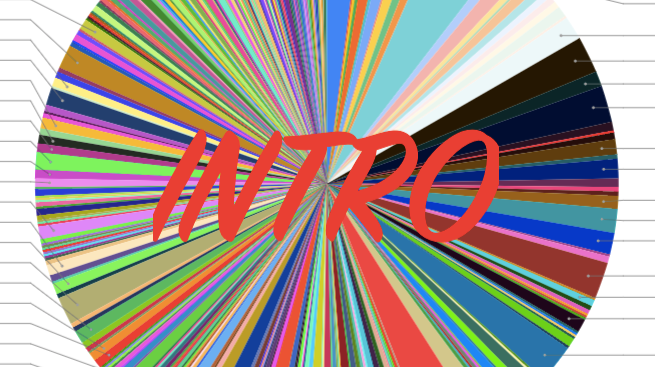 A depth analysis of bitcointalk.org speculation thread "The next 100x-1000x coin? " - Intro

As seen in my previous post here in publish0x - Prologue -  I will provide a series of detailed analytics about predictions made in bitcointalk.org speculation thread "The next 100x-1000x coin? " .
This is a nice experiments able to provide a complete outlook of specific period "ICO MANIA" during August and December 2017.
Analyze the patterns of the market could give a clear advantage... let's see some data and interesting facts that could be obtained from these data. 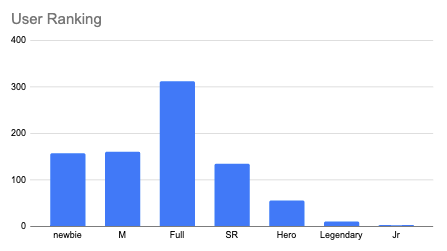 There is a massive participation of full members and newbie. Meanwhile Hero and Legendary have not so many predictions.
Participation of Junior members seem very low if compared with other ranks.
I think these data are depicting two facts.
During this "era" a lot of newbies (18.82%) starts to invest in cryptocurrency and these predictions are a clear sign of this trend.
Legendary are rarely promoting altcoins or provide to much hype in a possible profit.

DEAD COIN PREDICTIONS
We will see next what is the rate of "dead" coin predictions. It means a coins delisted from coinmarketcap.com and without a website accessible.
Mostly these tokens have not market. Some Erc-20 tokens have always a trading in Decentralized exchange but technically without a real market.
A total of 77/834 dead predictions were reported (10.83% of predictions have reported a total loss!)
Despite this is one of the interesting industries in the last years with very high revenue some people lose money.

This is distribution between users: 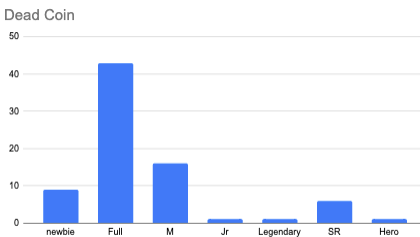 What is the reason behind of these failures? We will see later on a specific chapter only dedicated to Dead Coins!
Just as note 178 predictions have been identified and excluded since project "Not Listed" but however still survive (or were not quoted at time of prediction by coinmarketcap).

Now we can have a look on final results.Value are always calculated taking in count the value during prediction date.
The same coin could have a different result if has been posted in a different time.

NEGATIVE RESULTS
469/834 as today (17 Dec 2020) have reported a negative profit!
This is more than half (56% )of the whole amount, that summed with Dead Coins give a final results of 65,4%. Probably this number despite is very big has a positive result indeed,  because some of these coins hyped were posted like a scam coin so easily identifiable (likewise account created ad hoc or recursive posts). Every Rank reported at least 50% of negative predictions. 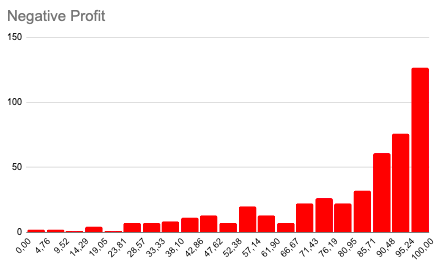 POSITIVE RESULTS
110/834 as today (17 Dec 2020) have reported a positive profit! 13,18% of the whole amount.
I am not too much surprised for this value because more and more coins were launched as pump and dump scheme, scam traps or just ICO Trap.
Plus the market has granted success just few of altcoins. 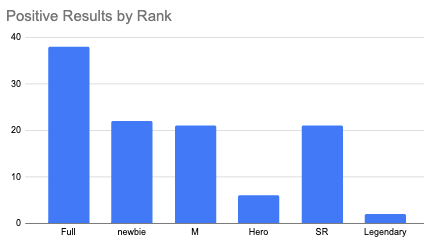 Scenario probably will change if we take a look by the next year, probably this could be an interesting post for the future.
Here we can find the final answer about topic question"The next 100x-1000x coin?

At Least 8 different coins reported a 10x. But no no one has touched 100x. The maximum has been 70x.
The same coin has been suggested in a different timeframe with a 1,33x ! We will see in depth this result on a specific post "Gain!"

What has really impressed to me is that some coins have been really able to over-perform bitcoin.
CAN YOU GUESS WHAT COIN? Leave a comment below