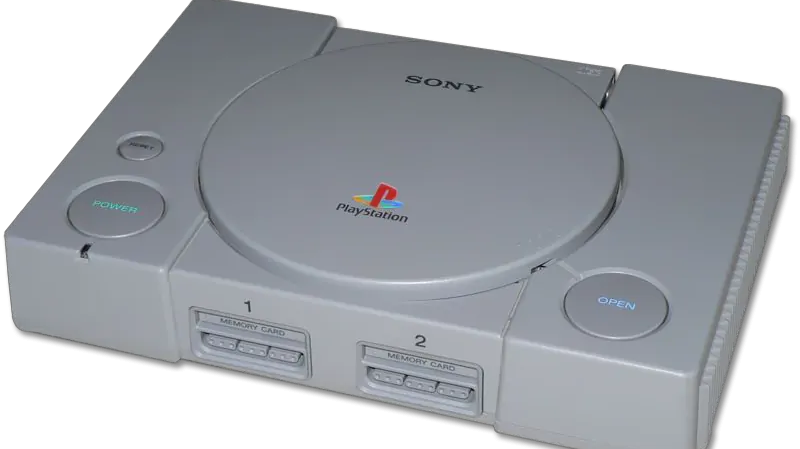 PlayStation 1 Games of My Childhood - Part 2

This post was originally posted on the STEEM blockchain in 2017. Rewritten for Publish0x. This rewrite is also on Hive.

I published [Part 1] a few days ago. In it, I spoke about some of the PS1 games that I have played in my childhood. I had more games in mind, so I figured they deserve mentioning too. Here we are~

As I said in Part 1, the whole summer was a vacation school. When I was a child I spent most days of summer playing games, often with my brother and cousins. Actually, the five of us spent more than three summers together every day, either in our house or theirs. 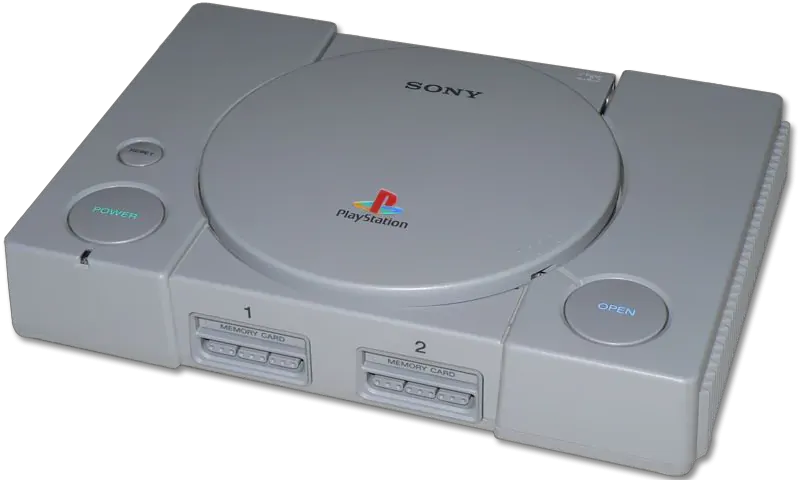 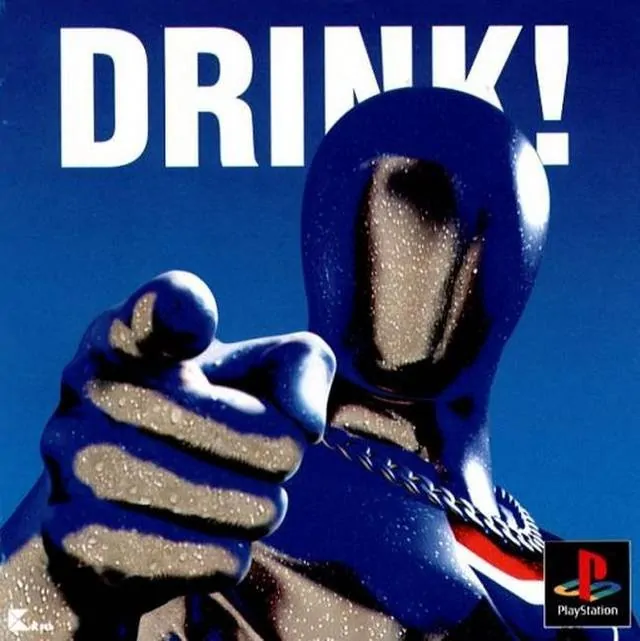 This game is related to one of my best childhood memories.

I played it with a lot of my relatives one Eid (Islamic festival) the house was full and we traded turns to play. Since there were a lot of us, each one can only play once.

We were all bad at gaming so we couldn't finish Pepsiman that day. The lovely atmosphere, however was itched in my mind. The whole family and relatives are smiling & laughing. It's one precious memory of mine. These days I don't meet with those relatives often. I wish I kept more in touch with some of them.

For the game itself, there isn't much... it is average in all things. It can be funny though... I mean who had the crazy idea to dress someone in Pepsi and make him run in the street like an id-- I mean, uh... like a respectable man in society? 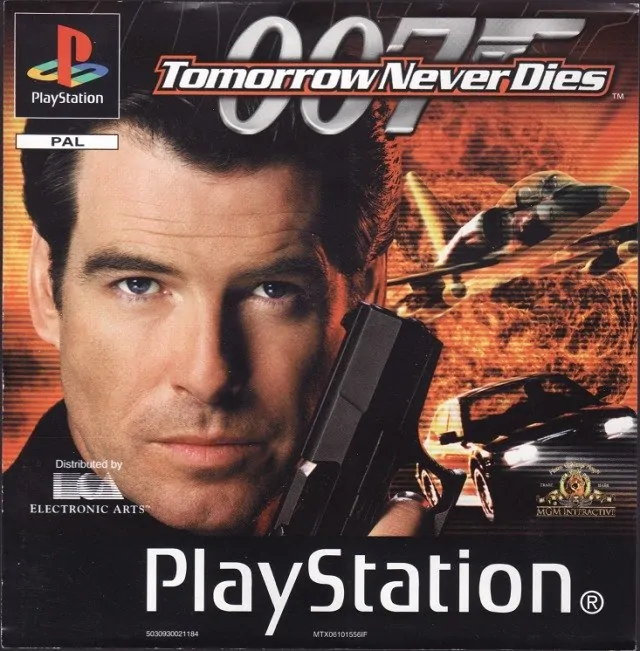 This was the first FPS experience in my life, my father bought it instantly as he knew the movie, (or maybe the James Bond name.) When he talked about it, he made me love the game before I even play it. Good thing he did that, because I couldn't do anything in the game. It took me and my brother many tires (in the span of years) to get past the first level.

That's why I remember the details of the snowy first level, but can't remember anything past that. To be fair, I got the game when the only things I knew of English were the letters so I didn't know what I was supposed to do in it. 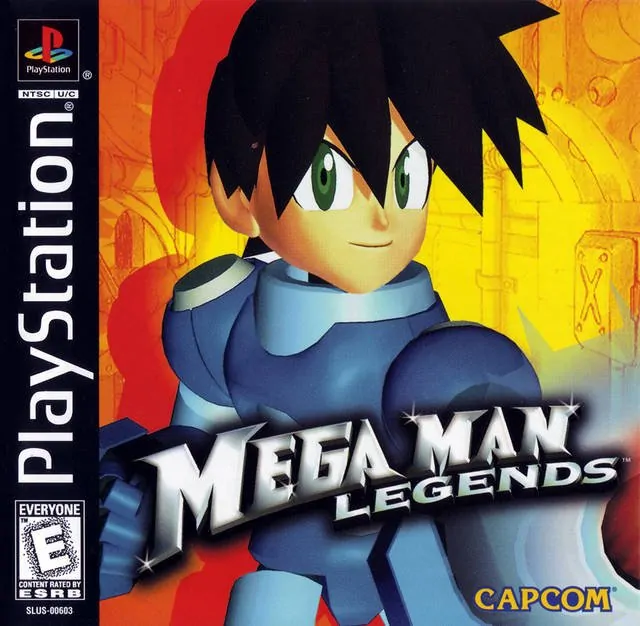 I played Megaman X5, before this game, but Megaman Legends is the best Megaman game I liked ever up to the time this was first written!

I don't know why, but this Megaman felt more alive, more... dynamic! I don't know how to explain it.

I liked this Megaman and Roll. They have personality. A lot of it! I liked the antagonists too. (They're Team Rocket type of trope, I dunno if I should laugh at their stupidity or pity them.) I liked some of the NPCs even though I felt most of them are there just to fill an empty space.

The different weapons were a good idea too, I liked the landmine attack! I wished they didn't cancel Megaman Legends 3... Looking at its screenshots I was sure that game will be the best Megaman game ever!

Luckily, we have Gunvolt! 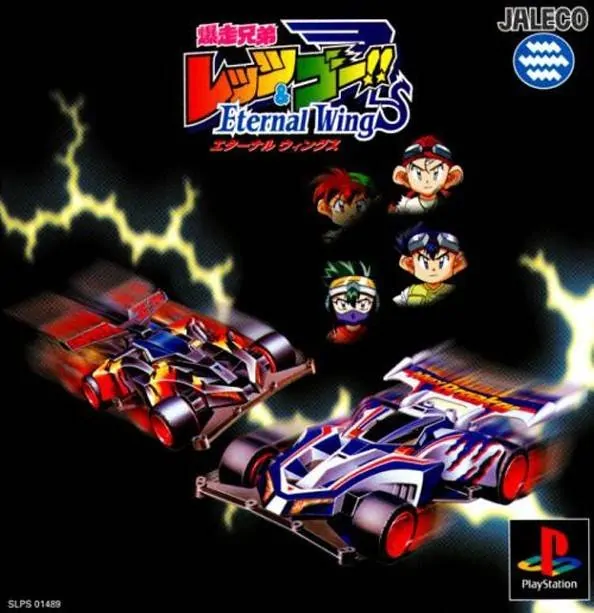 If you lived in the Arab world as a child in early 2000s, you probably heard of this series سابق ولاحق (Let's and Go) was a very popular animated show on Spacetoon, the most popular channel for animated shows in Arab world.

So when I found this game in a shop I bought it and played it... Though I never learned Japanese. (Even though I'm better at it now.) This game was fun. It's the best my favorite racing game in my childhood. I didn't know some of the characters because this game was based on the third season of the anime. At the time, Spacetoon has only aired two seasons... The third season aired much later in my late teens.

Spyro: Year of the Dragon 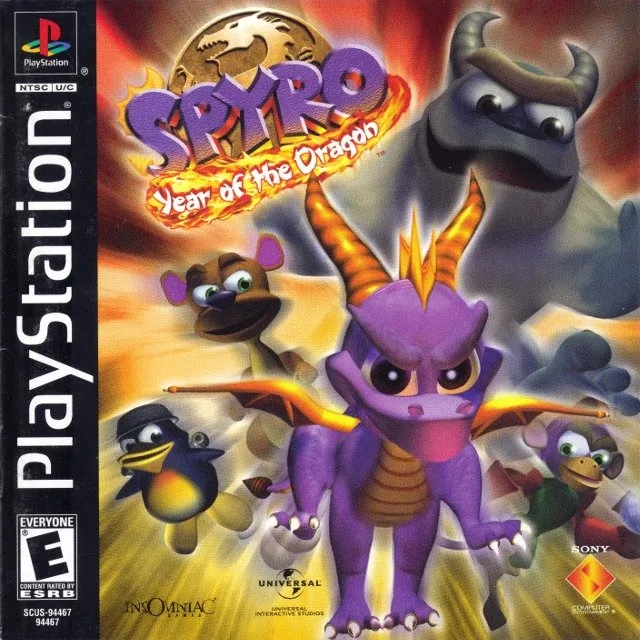 I was fairly young when I played Spyro. The world(s) was gorgeous in my eyes as a child. I spent a lot of time in this game. Though a lot of it was in the mini-games and just exploring without actually progressing. Spyro was a different game than what I was used to. Everything in how you control the dragon is different.

There are also a few levels where you play with other characters, and I liked the Kangaroo one.

I said in my previous post that Digimon World 1 was the open-world experience on PS1... Spyro might've felt more open and free, because it was fully in 3D.

In my childhood, I didn't know that this game was the last part of a trilogy. It felt pretty much standalone. Luckily, the whole trilogy has been Reignited in the Remake! 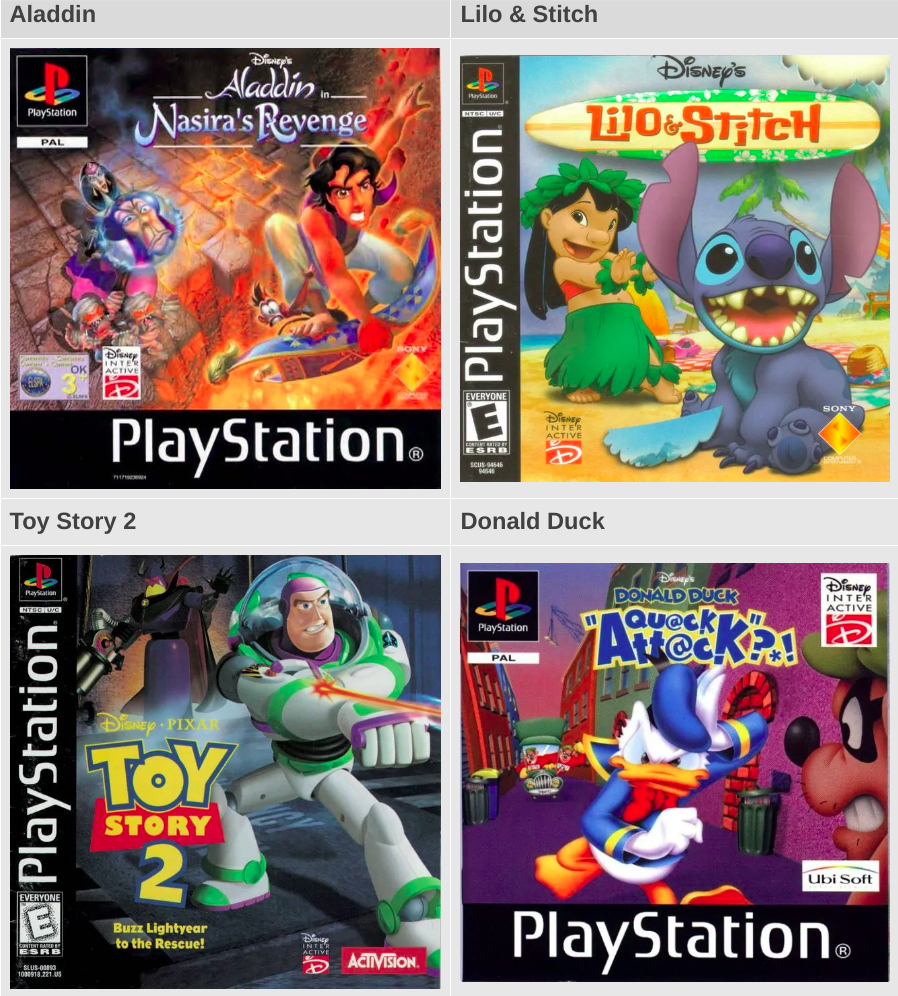 I remembered these other Disney games that I didn't mention last time. These weren't as good as Disney's The Lion King or Tarzan I mentioned in Part 1.

I remember playing Aladdin, but I don't have any strong memories of the game. I loved the movie, I probably liked the game too. But for some reason, I don't remember the gameplay. weird...

Lilo & Stitch is an average game, but I liked how they've gone from the movie to the game version.

Toy Story 2, I loved Toy Story from the moment I read about the movie in a children's magazine. The game was good too. You get the feeling of Buzz as he tries to rescue toys. Don't remember much of it other than it was a very good game.

Donald Duck was a great game. It's one of the games we (me, my brother and cousins) spent a lot ot time on. I remember even playing it on their PS2 at one point. We took a long while to finish the Donald Duck game, but I loved it regardless! Seriously, Disney knew how to license a game in the PS1 era! ~ 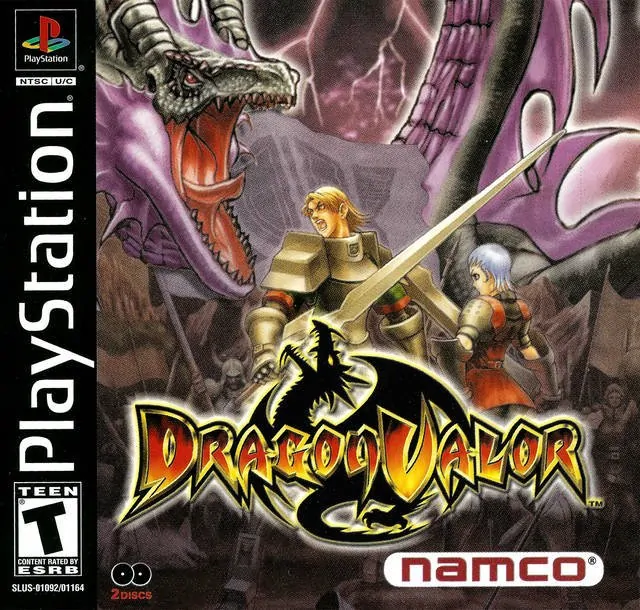 I haven't played this in my childhood but in my mid teens. (Around 14-15.) I had to put it here since this game did something I rarely if ever see... It's EPIC!

My cousins played it on their own, before I knew about it. They talked about how good Dragon Valor was, but I didn't believe them until I played it and finished the first campaign.

Unlike them, what amazed me wasn't the good gameplay or the lovely character design (for a PS1 game) but how the story unfolds. It's an Action game but it's told in Chapters. Each chapter has Multiple Endings! That branches out with huge changes that affect the chapters to come.

It's an action game but it had all of what made RPGs fascinating for me...

And the multiple endings of a chapter aren't reached by cheap methods like multiple choices or killing/sparing someone... They depend on how you navigate the world: Saved the princess before killing the dragon? You marry her. Didn't do that? Killed the dragon quickly instead? The princess is saved regardless, but as she doesn't know you, you end up marrying the young woman who helped you at the start of your journey.

Your son (a different character in each branch) will complete the journey after you.... Dragon Valor spans three generations and each player character different. (Wow, this is turning into a full review, isn't it?)

For a while, my dream was to develop a game like it when I grow up, that didn't become reality, (yet.)

Thanks for reading up to here, I hope you had a good time reading this post. What Is Your List?

~ I look forward to your comments ~

Gaming Snaplogs are written snapshot blogs, each detailing moments in my life with games. Reviews, Opinions as well as records of my gaming experiences are included here.